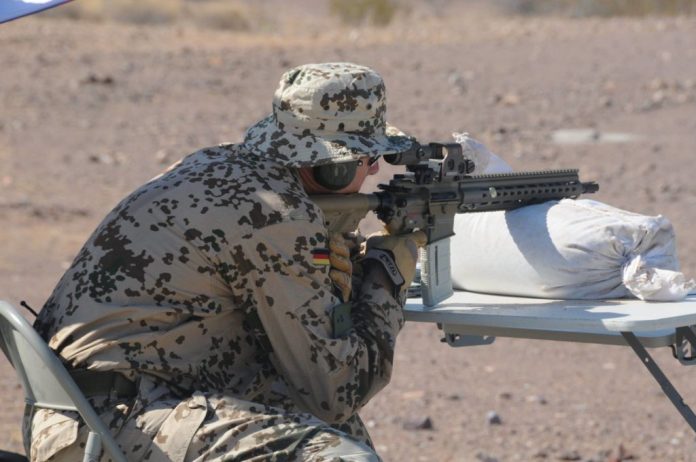 The rifle will come with a 14.5-inch barrel, shoot the 5.56x45mm NATO cartridge, and be fitted with a 45-degree safety. The German army has selected EOTech to provide the optics; the rifles will be equipped with the EOTech EXPS3-0 holographic weapon sight and G33 magnifier.

In the summer of 2018, the German army traveled to the U.S. to field test the new rifle. German special operators went to the Yuma Proving Ground (YPG) in Arizona and put the G95K through a series of arduous tests to determine its suitability. According to Luis Arroyo, chief of YPG’s Training and Exercise Management Office (TEMO), the G95K had already passed all the technical evaluations, but further testing would ensure user input would be relayed back to the manufacturer. He said it was of paramount importance that the rifle’s manufacturer know what the operators think of the weapon and its performance under operational conditions, as well as how it could be improved.

Dr. Karl-Heinz Rippert, chief of optronics in the lasers and acoustics branch of the German Ministry of Defense, stated that YPG offered ideal testing conditions for the G95K. In “the Yuma Proving Ground we have special conditions of sand and dust,” said the German official, adding that “the landscape profile is similar to Afghanistan. The result we achieve should have some relevance to our missions, and the main mission in recent years was in Afghanistan.”

The YPG offers the U.S. military, as well as foreign allies and partners, the opportunity to field test military equipment under the most rigorous environmental conditions.

The KSK is Germany’s premier counterterrorism unit. It is a fairly new outfit, having been established in 1996, but already has a great deal of combat experience from conflicts in Iraq, Afghanistan, Mali, Libya, and other places around the globe. The KSK was modeled after the British Special Air Service (SAS) and America’s Delta Force. Much like the KSK, the KSM is the premier special operations unit of the German Navy. Established in the 1950s, the KSM specializes in maritime counterterrorism and all maritime special operations missions.