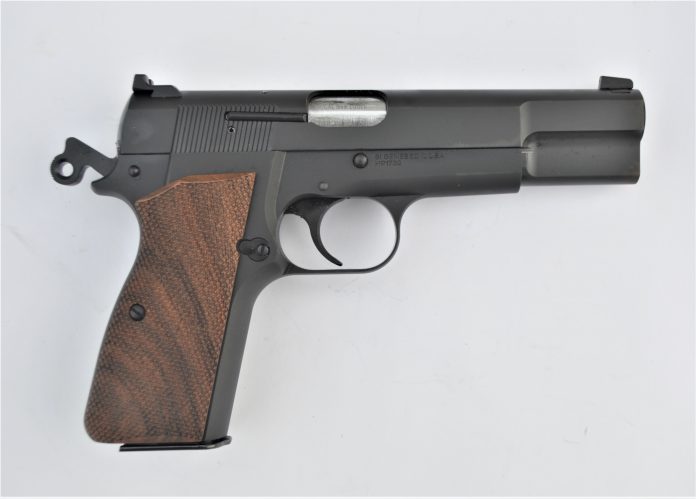 I have been accused of writing Biblically.

Well, in the beginning the greatest firearms inventor in history, John Moses Browning, was the right man at the right time. Guns were not designed by teams but, for the most part, by a single individual. These firearms have stood the test of time. The Winchester 1894, Browning Auto 5, Colt 1911, and Browning High Power are among Browning’s achievements. Not to mention the BAR, Browning Light Machine Gun, and the Browning .50 caliber heavy machine gun.

The subject of this report is the newest rendition of the Browning High Power. The Grande Puissance or P 35 9mm was originally intended for the French Army. They turned it down and adopted a quirky .30 caliber pistol instead. However, some fifty other nations eventually embraced the FN P 35. The High Power was arguably the finest service pistol in Europe for many years. Special teams worldwide used the High Power. This is a simplistic bit of history but enough for our purposes.

The High Power is a single action locked breech pistol. The pistol is properly carried cocked and locked when on the person. Hammer to the rear, safety on. The High Power was among the first pistols to feature a double column high capacity magazine.

The big Browning held thirteen rounds. Notably, the trigger isn’t exactly straight to the rear in the style of the 1911 largely due to the need to move around the wide magazine. This made getting a good trigger on the High Power difficult initially, but then it was designed for short range use.

The pistol went through minor detail changes over its many years of production. Along the way there were a series of clone guns including the FM, the Israeli Kareen, Arcus, Tisas, FEG, and perhaps a few others. The final version from FN was the MKII.

This pistol features good sights and an ambidextrous safety. Fabrique Nationale has been the manufacturer since the High Power was introduced about 1935. A large number were manufactured by John Inglis company in Canada during World War Two.  Many are still in use by our Canadian allies. Sales of the High Power had slowed to the point it was no longer viable for FN to continue producing the pistol. With a retail price of well over one thousand dollars there were other pistols that did much the same thing for less money.  The CZ75 is one example. While folks were not buying the High Power when the new guns were discontinued prices shot up on older High Power pistols. Go figure.

Springfield Armory set out to manufacture a credible High Power clone at a fair price.

After much fanfare and colorful ads I was able to obtain a regular production SA-35 in December 2021. The pistol seemed well made during the initial inspection. The finish is matte blue. There are no glaring faults. The finish is even and when I disassembled the SA-35 I found no tool marks. The initial impression is of credible manufacture.

If you are familiar with the Springfield Mil Spec, this pistol is similar in its initial impression. The stocks (grip panels) are nicely checkered wood. They are ideal for most uses and provide a good balance of abrasion and adhesion. Many factory High Power stocks were too thick, this set is ideal for the purpose. The pistol’s magazine has been upgraded to fifteen rounds over the original’s thirteen rounds. The magazine release and slide lock are standard High Power types.

The safety is similar to the Cylinder and Slide custom extended safety. The safety indents firmly in place and snaps to the fire position sharply. The hammer is a rowel type, not true to most High Power patterns but useful. It doesn’t bite the hand as the spur hammer may. The sights are very good designs for combat use, and they are replaceable/upgradeable. The front sight is a standard post. The rear sight is a wedge type with a U notch rear. This combination makes for excellent speed to sight acquisition and target engagement. I like these sights a great deal. Be aware than unlike many modern handguns it is very expensive to change sights on a High Power type pistol.

The trigger action is different in feel than a 1911. If you can manage a 1911 well with its straight to the rear smooth trigger compression in good examples you will not necessary hit the ground running with the High Power. There is some take-up and then you begin primary compression. The pistol originally registered just over five pounds on the RCBS trigger pull gauge. After a few weeks of use it settled into 4.9 pounds. This is a good trigger action for the High Power, probably as good a trigger as I have ever tested on a factory Browning High Power type pistol.

On a personal level, I had high expectations of this pistol. I was excited to test the piece. Not that I lost objectivity, I would have been aggravated if the handgun had not performed well. I have been putting aside a relative horde of ammunition by 2021 standards. I have ran over 400 cartridges through the pistol to date. Most have been FMJ loads, whatever I could get, foreign, domestic, clean burning, dirty, and standard loads to +P.

I tested quite a few Red Army 9mm brass case. I suffered a single FTF with Red Army. I removed the round from the chamber. The primer took a solid whack, it simply did not fire. It fired the second time I tried it. The pistol was fired at man sized targets mostly at 10 yards, a good middle of the road distance, and also 7 and 15 yards. The High Power is very fast pistol to a first shot hit. It may be even faster than a properly tuned 1911. At combat ranges I simply tore a single ragged hole in the X ring. A trained shooter would be far from helpless at 50 yards or more with this pistol.

The Springfield SA-35 gets a clean bill of health at this point. It performs well in combat distance firing. A 32 ounce 9mm doesn’t recoil much and the SA-35 is controllable. Magazine changes are rapid as the magazine well is large and the magazines tapered. All controls are crisp in operation. The sights are a good design. The final test and perhaps the least relevant for a combat gun was firing from a braced firing position and measuring the groups. I fired five shot groups and measured the width from the center of each of the most widely spaced bullet holes. I fired from a barricade rest. The Winchester Active Duty load is a full power FMJ I have enjoyed excellent results with. I also had on hand an old supply of the Winchester Defender 147 grain and, among my favorite carry loads, the Winchester Defender 124 grain 9mm. I took my time and used a target with a large red center. The range was 25 yards. Results were good. The FMJ load went into 2.65 inches for give shots and the 124 grain loading broke 2.5 inches. The 147 grain loading, however, exhibited the best accuracy. The group was 2.25 inches. Three of the five shots were in 1.45 inches. The SA-35 will shoot if you do your part.

I like the SA-35. It is well made. The High Power is back and seems better than ever. Thank you Springfield Armory.