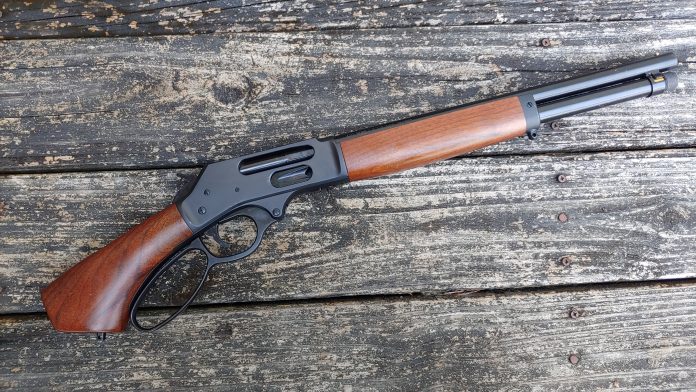 The Henry Axe 410 is an odd cookie. You see, fun guns are my favorite, I love fun firearms, and most of my weapons are fun guns. Fun guns also tend to be cheap guns, and not necessarily well-refined guns. The Henry Axe is undoubtedly the best made, most refined fun gun I’ve ever handled. The Axe falls into the same realm of weapons as the Mossberg Shockwave. It’s a firearm that fires shotgun shells.

This specific model is a 410 and features a 15-inch barrel with an overall length of 26.4 inches. There is no stock, just a grip. The grip look is what inspires the name. The pistol grip looks almost like an axe handle, and it’ an accurate description. 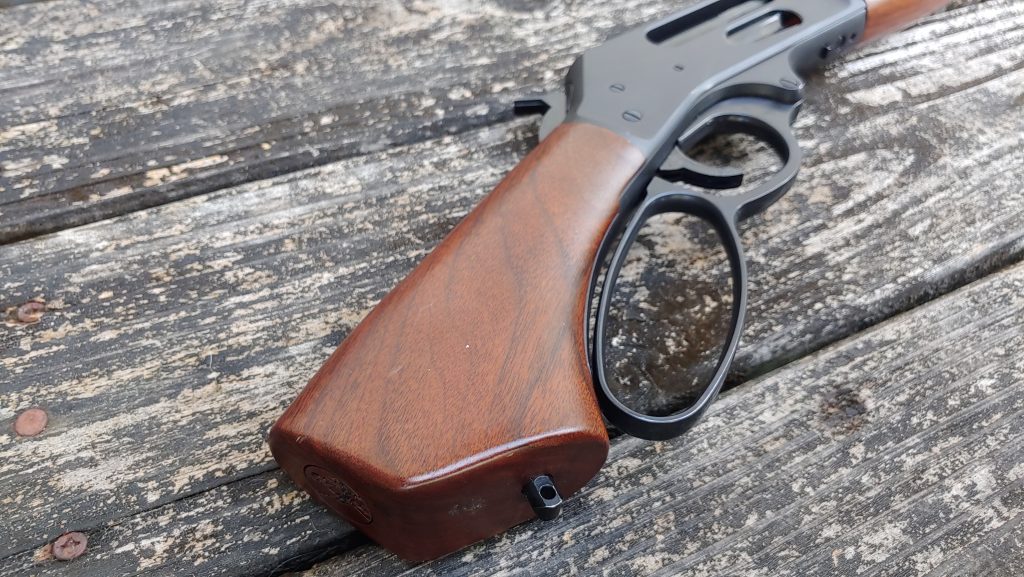 The Henry Axe is the perfect option if you want to feel like a Terminator Junior. We’ve already talked about how this gun is already inherently weird, and that’s ignoring the fact that lever-action shotguns are intrinsically odd. The combination of a shotgun shell firing weapon that’s not a shotgun and is also a lever action and is incredibly well made makes the Axe a real standout.

Lever action guns are inherently stylish. Maybe it’s their old west appeal or the fact you get a visceral thrill from working the lever. I’ve always had a soft spot in my heart for lever-action guns. Add in the fact that I’m a shotgun nerd and think the NFA is abhorrent, and you get a weapon I’m bound to love. 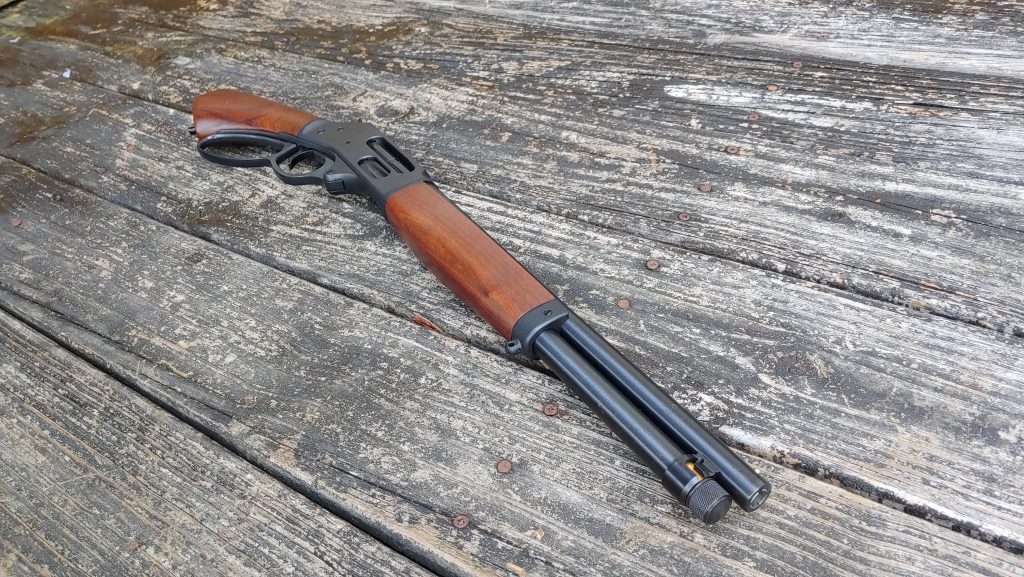 The Henry Axe 410 keeps the finely made design, and high-quality Henry is known for. The Axe feels solid and extremely well made. The finish and wood furniture are both fantastic. The finish is a dark, blued steel that is extremely strong and durable. I’m not a gentle man, and I live in a humid environment, so any signs of rust would be present immediately. The wood is a dark brown American walnut that looks and feels great. It’s part of that style that keeps me loving lever action guns.

The Henry Axe features a single gold bead that’s large and eye-catching. The gun is topped with front and rear sling swivels, and you can load the weapon through a loading gate or directly through the top of the tube. 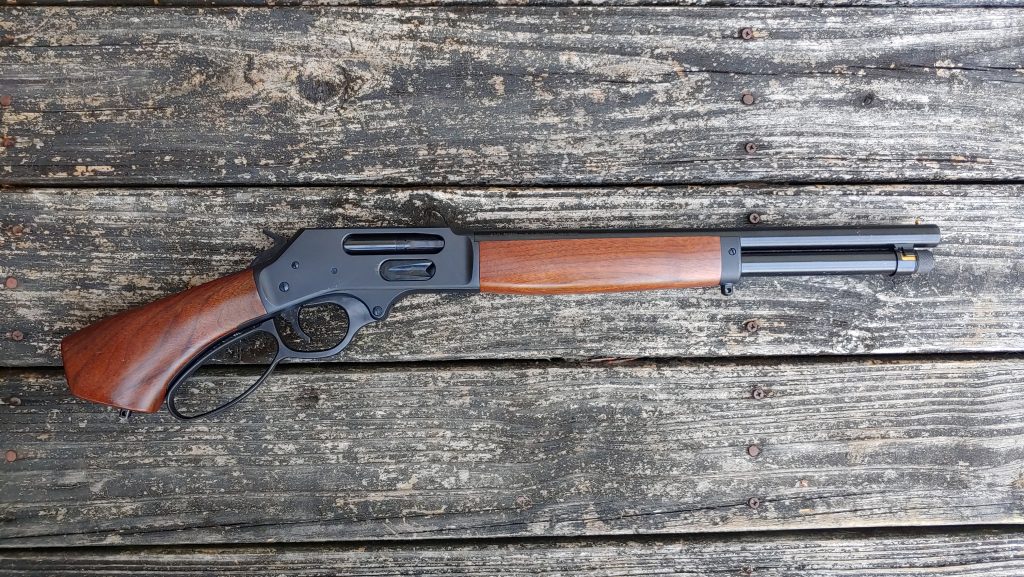 The lever glides back and forth and smoothly to manipulate. The Henry Axe only has a 2.5-inch chamber, so the lever throw is short and comfortable. There is no manual safety, just a transfer bar, and anything else would be an abortion on a lever-action gun. Lastly, the gun uses Invector chokes that are easily removable.

The Henry Axe is a very high-quality package, and it cuts no corners in its production inside or out.

As much as I love working the action on a pump-action shotgun operating a lever is much more addictive. It’s a shame 410 shells are so expensive because I keep running through them. The recoil on this gun is nearly nothing and the massive combination of wood and steel results in a 5.75-pound gun. To put that into perspective, it weighs more than the 12 gauge Mossberg Shockwave.

Even the heaviest load of buckshot is a kitten in this gun. It is not painful or difficult to control and doesn’t make the lever impact your fingers due to recoil. The Axe can quickly be fired with one hand, but it’s still almost six pounds, so I don’t suggest trying to flip cock it. The Axe ejects spent shells with a good bit of authority and power and sends them flying from the gun.

The gun is pretty easy to aim, and the lack of any real recoil keeps you from flinching or smacking yourself in the face. Adult shooters of almost any size or experience level can handle it. It’s even fun for new shooters. My girlfriend is a petite little thing with minimal experience with guns and has a blast with the Axe. Setting up a series of clay pigeons on the berm and blasting away against a timer is a ton of fun. 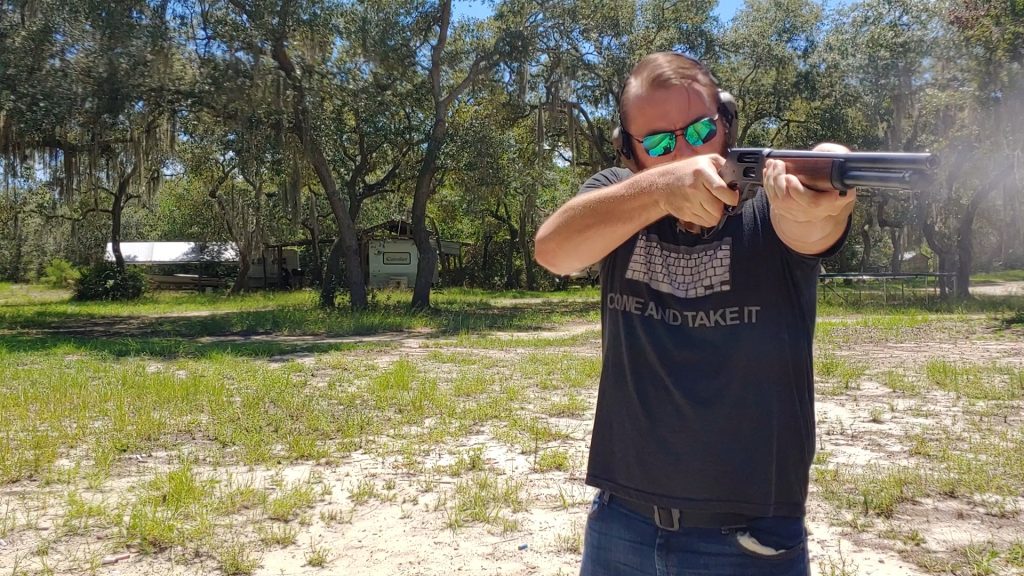 As a lever-action, the reliability is all on you and your ability to cycle the gun manually. It doesn’t fail to eject, load, or fire in the last few hundred rounds. While ammo is dried up all around me, I can still find plenty of 410, so this gun has been going to the range with me more than usual.

What could you do with this gun besides have tons of fun? It can be tough to find a real use for the weapon, and I’m not someone who needs a reason to buy a gun. If I searched my mind, I can find a few ways the Axe can be handy.

As a Floridian, I live in a constant battle with venomous animals of all sizes and shapes. Even the nonvenomous intrusive python is an issue here. The Henry Axe is a short and handy means to dispatch snakes with extreme prejudice. 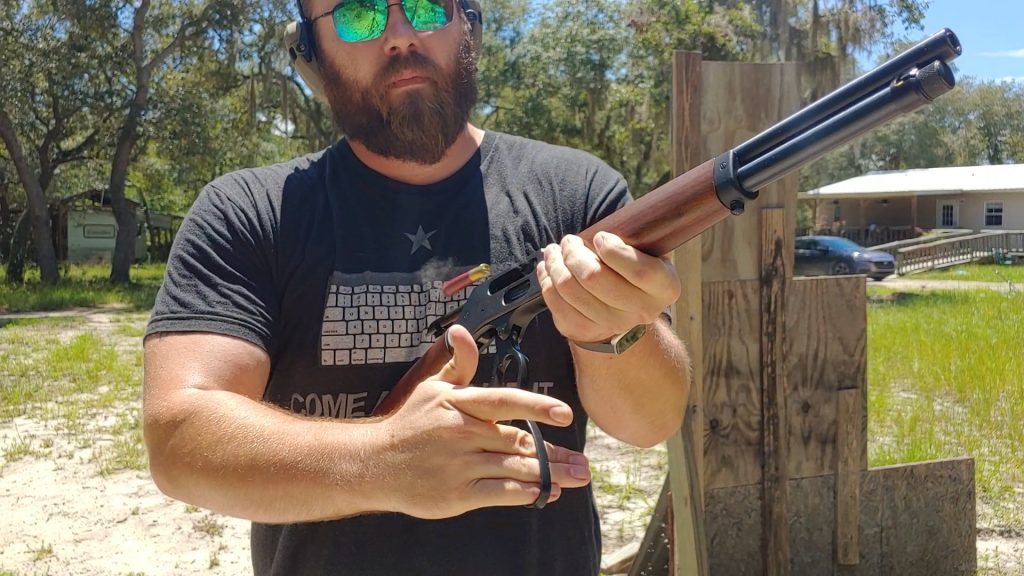 The lack of a stock can make it a fun and challenging small game hunting tool. Squirrels and rabbits would be perfect prey for the Henry Axe.

You ever get one of those Wal-Mart clay pigeon throwers and get some buddies together for the most informal game of Skeet ever? If so, then the Axe is a blast to try and shoot clays with.

As a defensive weapon, it would work, but there are a lot better choices out there. A full-sized 9mm handgun would be a more practical choice, as would a braced AR 15 pistol.

The Henry Axe – Because Why Not?

The Henry Axe is not a cheap gun with its MSRP of 970 dollars, and thats a lot of dough for a fun gun. However, it’s also a very well built gun, and its the highest quality ‘shotgun shell firing firearm’ on the market. It has that classic Henry look, feel, and quality we’ve all come to know and love. That kinda quality costs money, and as someone who has spent more money on less fun (aka my first marriage), I’ll pay for quality when it brings a smile this big to my face.