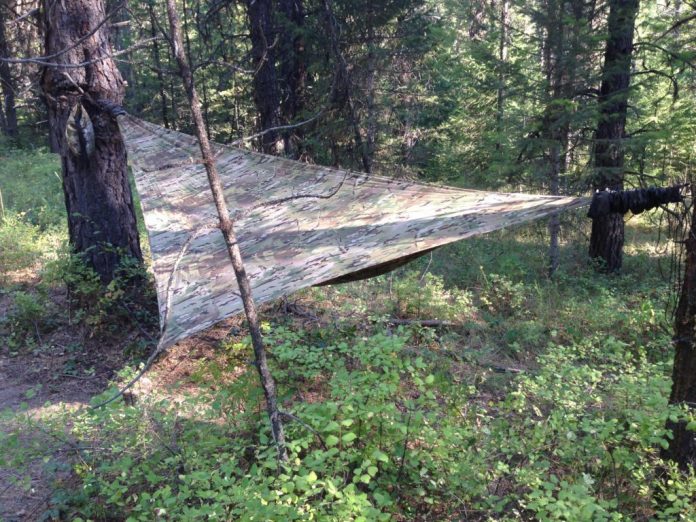 I’ve lived in a lot of different shelters throughout my time as a survival instructor. Pup tents, tents, snow caves, hammocks, rock over hangs, tree wells, lean-to shelters, lean-aways, shelters made from parachute and most other shelters. Throughout this I’ve defaulted to something simple most of the time, a tarp of some type with a poly pad. It’s light weight and dual purpose. A year ago however I discovered the Hennessy Hammock and decided to give it a shot.

I’ve been using the Hennessy Hammock for over a year now, sleeping in the shelter for a total of 37 days spaced out evenly month to month. It’s important to understand that a Hammock in general is not a recommended shelter during the winter. Even with a good inflatable sleeping pad under you to create dead air space you’re going to sleep very cold. I don’t recommend hammocks in temperatures below 40 degrees in most cases unless you have very specific equipment / gear. Even if you do there are shelters far more suited to those environments.

With that understanding let me be clear that hammocks have many benefits, you’re cooler in hot temperatures, they’re extremely comfortable, you don’t need level ground and generally they don’t take up much space in your pack. There are several downfalls however, many hammocks put you into a banana shape which can be uncomfortable after several nights, further many lack protection from insects. What sets the Hennessy Hammock apart from other hammocks is size, weight, sleeping position, and bug net.

The Hennessy Hammock weighs in at 3 pounds packed, with an approximate dimension of 5″ x 8″ x 12″. When combined with Hennessy’s snakeskins you have a very convenient package. The snakeskins is composed of two stuff sacks at either end of the hammock. They can collapse the hammock in under 30 seconds with practice and the Hennessy Hammock will never touch the ground. Talk about quick and convenient. The Hennessy Hammock has an asymmetric sleep position wherein you sleep at an angle to the ends of the hammock. This allows you to lay just about completely flat and will eliminate most of the strain common to sleeping for extended periods of time in other hammock systems.

The Hennessy Hammock Survivor is also equipped with a zippered bug net to keep out unwanted guests during your adventures and it works very well. The Survivor also comes with a smartly designed rain fly cut just large enough for the hammock itself. There is no wasted space. And while some may find this irksome, it cuts down on bulk, and weight which are huge factors to consider when doing back country rucking. I’ve found that I tend to put the rain fly very low to the Hammock. This helps to keep any rain out which might come in at an angle during high rain and winds. The inside of the hammock has a pouch suspended over where you sleep which allows you to stow your headlamp or other misc items when relaxing or sleeping.

In practice what has made the Hennessy hammock such a keeper for me is the ease of use. I can put it up in under 4 minutes and can take it down in 30 seconds. It allows me to sleep flat even when the terrain is not and it keeps out unwanted insects. I’ve put this hammock through its paces over the past year and would certainly recommend it to anyone considering a hammock during 40 degree F plus weather.