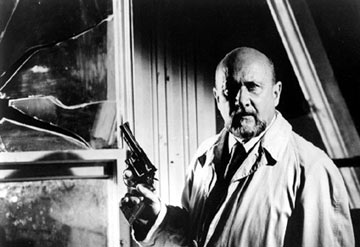 It’s the spooky season, and as fall swoops in and the world embraces pumpkin spice and enough Halloween candy to trigger type 2 diabetes, it’s time to talk about the guns of horror. Guns in horror movies aren’t a popular pair. Why?

Well, if you pull a failure drill on a psycho killer, that ends the movie pretty dang quickly. That doesn’t mean that horror movies and guns don’t go hand in hand occasionally. I’ve selected seven of my favorite examples of the guns of horror.

Werewolf movies are the exception to the guns of horror rarity. Guns often solve werewolf problems, and in Silver Bullet, they are front and center. In fact, most of the town reacts to a local killer by grabbing guns. In the end, our Werewolf problem is solved by the combination of a single silver bullet, paired with Gary Busey, a paraplegic 11-year-old, and an S&W Model 629.

If you had to hunt a werewolf, you’d be hard-pressed to find a better revolver for the task. Six shots of .44 Magnum will put down a bear, so it should work for a werewolf. Plus, while it’s a magnum round, the 629 eats recoil and makes follow-up shots a possibility.

You put Kurt Russell in a western, and I’m watching it. You take that same movie and make it a horror film, and I’m buying it. Bone Tomahawk has Russell playing Sheriff Franklin Hunt. He’s a no-nonsense type that has a preference for Scholfield revolvers. The S&W Scholfield was an innovative design with its top break action.

For the time, it was quick to reload, and it was the first standard-issue, cartridge-firing revolver in US Army service. Russell blasts away at cannibalistic troglodytes and ultimately kills a fair number of them before the movie ends. It’s a great horror movie with some seriously creepy elements, but it’s nothing a Scholfield can’t solve.

The Evil Dead series all include the presence of Ash’s boomstick. This double-barrel shotgun changes between movies and can be tough to positively identify. Ash uses it to great effect when it comes time to turn ghouls, zombies, demons, ghosts, and whatever else into bloody red paste. The double-barreled shotgun is one of the easier guns to activate and use with one hand, which is a concern for Ash. Although reloading rarely seems to be an issue, he fires it several times before he ever cracks open the barrels. As far as guns of horror go, the boomstick might be the most famous.

Dawn of the Dead – Savage Model 99

The original Dawn of the Dead still holds up rather well. It’s another genre of horror movie where guns work well. The story is simple. A trio of dudes and a lady hold up in a mall. This was the glory days of the American mall, and that means the mall had a gun store. One of the main characters, peter, grabs a Savage Model 99 and uses it for most of the movie. 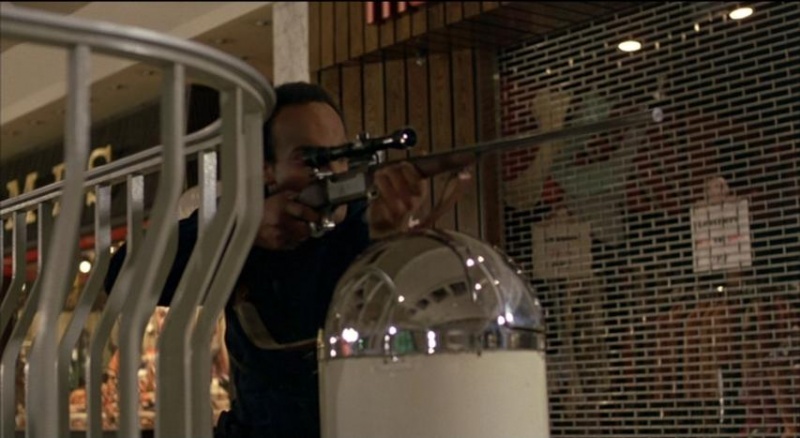 The Savage Model 99 is an interesting lever-action rifle. It used a rotary magazine that held six rounds and could chamber spitzer-style rifle rounds. In Dawn of the Dead, Peter’s gun wears a rifle scope, and he uses it split the wig of both zombies and invading bikers throughout the movie.

Halloween created the modern slasher and also is a perfect example of how it ends when the gun shows up. In the original 1978 film, Michael Meyers is an escaped mental patient. He’s huge, demented, silent, and terrifying in his mask and coveralls wielding his kitchen knife of chocie. He cuts his way through a little town on Halloween night until a Doctor with a gun stops him.

That gun is a Smith and Wesson Model 15 Combat Masterpiece. It’s one of the best .38 Special duty guns ever created and only recently left service with the United States Air Force. Dr. Loomis specifically brought to kill Michael Meyers, and at the end, he empties all six rounds into his chest, stopping the attack…at least for Halloween 1978.

Jaws isn’t your typical horror movie. It’s a thriller that takes place at the beach. No haunted houses or spooky woods. At the same time, it’s likely a film that inspired more real fear than any other ever made. Jaws is a shark; it’s not evil or out to hurt people for fun. The shark is just a cold-blooded, emotionless killer. It’s up to a shark hunter Quint, and Police Chief Martin Brody to kill the beast terrorizing their town.

Quint keeps an M1 Garand on the boat he hunts from. While it doesn’t save Quint, it does allow Brody to stop the monstrous shark finally. The M1 Garand is a legendary service rifle firing the all-American .30-06. The semi-auto action allows for rapid follow-up shots, and the .30-06 hits hard and flies fast. There are certainly worse weapons for shark hunting.

We love horror movies because we like feeling things. We are creatures uniquely affected by art, and horror gives us anxiety and fear but makes it fun at the same time. It takes a talented and creative individual to make guns effective in horror without ending the movie in 15 minutes. The above are a few examples of how guns can work in horror.