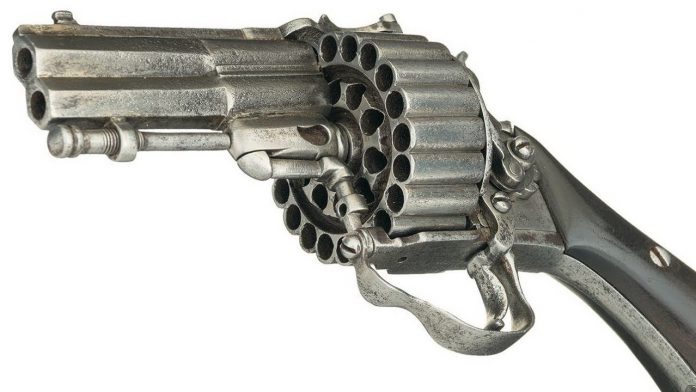 Weird guns are a dime a dozen. Weird guns come from odd companies, and that’s fine. What’s a little more interesting is when a standard company makes a weird gun. I’ve gathered five of my favorites that these big companies would rather you forget.

The late 90s and early 2000s were a weird time for guns. A lot of companies seemed to be experimenting just for the sake of it. We still see that to this day, but nowhere near the level of the Mossberg 590DA. Remember, at the time, striker-fired guns were taking over, but weapons with long double-action triggers like the Beretta 92 were still kicking around.

The Mossberg 590DA was an attempt to make the Mossberg 590s trigger like a double-action trigger. The trigger pull became more substantial and more prolonged. The idea was it would prevent negligent discharges or something like that. It was an apparent training issue someone was trying to solve with a mechanical solution.

Reports vary on the trigger’s quality. Some said it was bad enough to disturb sight picture and tire the hand. Others described it as a smooth, but the long trigger. Forum posts vary descriving it, but official reviews don’t seem to exist. The worst part was while the trigger was longer and heavier, you didn’t get the benefits of a double-action trigger like restrike capability.

The 590DA didn’t last long, and I can only find a single poorly photographed ad and the official manual.

Continuing our exploration of the weird early 2000s leads us to America’s other shotgun maker, Remington. However, we aren’t talking about shotguns but the Remington Model 700. In 2000 Remington produced the EtronX. This was an electrically primed rifle that replaced the firing mechanism and trigger of a Remington 700 with electronic components.

The firing pin became an insulated cathode, and the gun required a 9V battery to function. The EtronX utilized special ammo with a unique primer that added as a resistor that would heat up and ignite the smokeless powder.

What’s the benefit you ask? Well, you eliminate the time between the trigger being pulled and the round being fired. This is called lock time, and the EtronX eliminated it! However, no one cared. No one wanted the rifle, or to buy specialty ammo, and the gun was quietly pulled from the catalog in 2003.

If I say, Marlin, you probably picture a fish. If I say Marlin guns, you probably think of the model 336 lever action rifle or the Marlin Model 60 rimfire rifle. You likely don’t picture a submachine gun. However, they produced a wood and metal monstrosity called the M2.

It was designed by George Hyde, and Marlin was contracted to produce the gun for the United States military. The M2 was developed to be a cheaper submachine gun compared to the Thomspon. It was the gun that popped between the M1 Thompson and the eventual M3 Grease Gun. The weapon used Thompson magazines and fired the 45 ACP round.

It weighed only 9 pounds! That’s 2 pounds lighter than the Thompson, which is sad for an SMG. Marlin was a traditional company and still remains one. It was a weird time, man. The M2 was an odd stop along the way for Marlin. If you look hard at it, it looks just like a wooden Hi-Point carbine.

The M2 wasn’t a bad gun, but Marlin had issues producing it, and eventually, the M3 was developed, and the M2 was nothing more than a weird time for Marlin.

So far, all these guns have been weird entries into long-running companies. These guns were mere speed bumps along with storied legacies. The USFA ZIP 22 actually killed a company. It took USFA out back and gave it the Old Yella treatment.

USFA was known for making excellent Single Action revolver, specifically Colt clones. Their guns were very well made, affordable, and popular with SASS members. The owner of USFA decided to invent the ZIP, a unique 22 LR bullpup handgun that used Ruger magazines and sold for dirt cheap.

USFA threw all their money behind the gun, even selling the machinery that produced the Colt clones to fund the ZIP. The ZIP could’ve been successful. It was weird for sure, wasn’t very ergonomic, but it was cheap, and 22LRs are un. However, the ZIP sucked. It was terribly unreliable, often making it through very few rounds before it jammed.

The company folded, and the ZIP is now a

How did this gun fail? How? Colt may kind of suck at making anything outside of 1911s or AR 15s, but they didn’t design this gun, Reed Knight and Eugene Stoner did. Reed Knight, as in Knight’s Armory and Eugene Stoner, the inventor of the AR 15. According to Reed, the original aluminum models were good to go when built as he and Eugene designed them.

The Colt 2000 was a wonder 9 with a 15 round magazine that was built between 1992 and 1994. The aluminum models numbered right around 3K, according to Reed Knight, and polymer frames numbered in the tens of thousands.

It was a unique gun with a rotating barrel and roller locking mechanism from old French weapons. The weapon wasn’t reliable, or even accurate and now exists as a collector’s item. It turns out that you can polish a turd if you put a prancing pony on it.

Weird guns are the most fun guns to me. I love them, own quite a few of them, and will continue to do so. It’s always exciting when a major company brings out something a little weird. Sadly, weird guns rarely last very long, and none of these lasted very long, either. One even killed a company. The one thing about weird weapons is that we never know when a bizarre weapon will become the new standard HK produced the first polymer-framed pistol, and now they’re the standard. The same goes for the Winchester 1897 and pump-action shotguns. We only call it weird when it doesn’t become revolutionary.

Open Carry: A Right or a Fashion Statement?