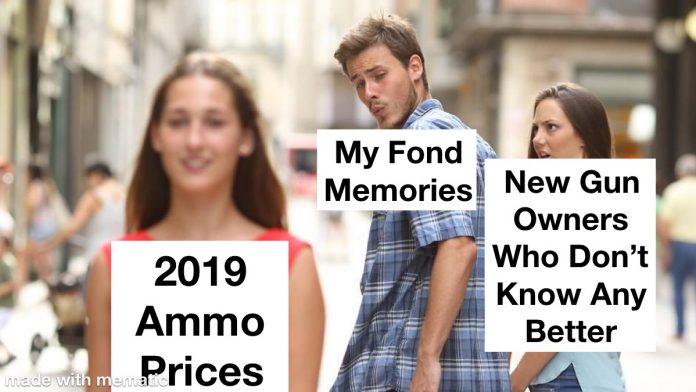 I recently had a pang while shopping at Walmart. I remembered how as recently as a year and a half ago I could buy several cartons of a hundred 12 gauge target shells each – just casually mind you – as I was picking out my groceries.

Imagine that – buying ammo with your toothpaste and breakfast cereal. And at $21 for 100 shells. That can’t really be true Grandma, can it? That’s almost as unbelievable as dollar a gallon gas. *whispers*- Just humor her, grandma has dementia.

I just the other day got an email from Brownells, announcing that they had Winchester Target loads in stock again – for a hundred bucks per 250 – plus shipping mind you. That’s double the price of what I used to pay at Wally World. But at least they had them. Now it’s up to me to decide if I’m willing to pay that for a few rounds of sporting clays. Supply and demand – that’s how it works. Of course they likely sold out within minutes of sending the email anyway.

Even with the ammunition industry running as full tilt as it reasonably can, it is looking like it could be literally years before I could ever shop like the good old days again. That makes me sad. How casually I took it all for granted before it was gone.

That’s not to say that I have absolutely nothing in my stash. But once it’s gone, the question is – can I afford to replace it? And after I spend double or triple the money to replace it, would I then want to blow 100 rounds on a single club sporting clays match? Or do I want to be more circumspect about how I expend my ammo? I think I know the answer – and so does my wallet.

I do have a Ladies Clays and Spa weekend coming up in July that I should keep in mind. I need to find out if ammo is included or if I have to bring my own. Then there will likely be the Gal Pal Pheasant Hunt Weekend in the fall, too. I should conserve for that as well.

Fortunately one doesn’t run through game loads as quickly as target loads, so there’s that. But even game loads are gone from the shelves or priced high enough to make one blink in dismay.

I should probably record all this in a journal for posterity or something. So I can recall the details when my great-grandchildren ask me about the Great Ammo Shortage of the 2020’s.

What are your memories of the Good Old Days?