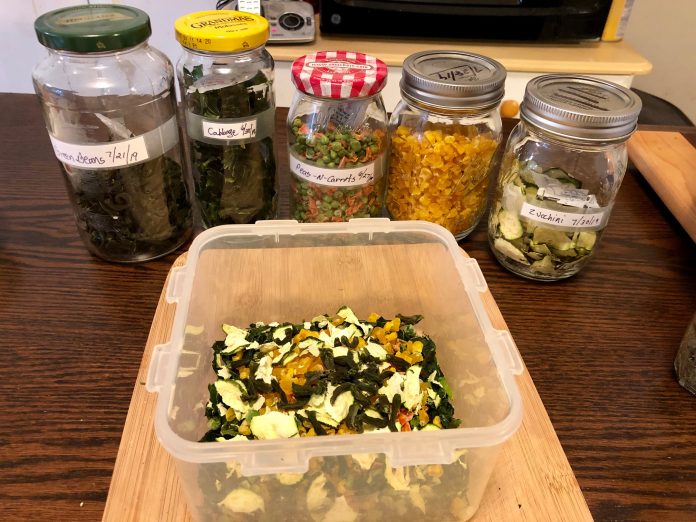 To continue my commentary on building a deeper pantry, allow me to present:

Why you should consider purchasing and using a home dehydrator.

Do you regularly cook for only one or two people?

Do fresh vegetables rot half-used in your refrigerator?

Do half-bags of frozen veggies get freezer-burned before you can finish them?

Do you buy a lot of beef jerky and fruit snacks?

Do you camp or backpack frequently?

Do you want to build a deeper pantry of shelf-stable food?

Most of these reasons fit me perfectly, so about two years ago I invested in a budget-level dehydrator. I chose a Nesco brand model. There are higher end brands, but I didn’t want to spend a lot to get started.

Dehydration is one of the world’s oldest preservation methods. Many foods don’t even require electricity to dehydrate. I regularly just hang mint and other herbs to dry on the top of my refrigerator. But other foods can spoil or draw insects before they dry enough to be safe for storage. Thus, I bought an electric dehydrator.

I began with making my own beef jerky. Then I progressed to fruit leather (think fruit roll-ups). Then I advanced to dehydrating apple slices for snacks. (I took jerky and dried apples on the plane to SHOT Show). This year I decided to try dehydrating vegetables for longer-term storage.

To help me in that regard, I bought two books – The Ultimate Dehydrator Cookbook and The Dehydrator Bible. There are loads of other choices, but these are the two I went with to get started. These books have been full of good advice on not only the dehydrating process itself, but also on storage suggestions and cooking suggestions.

The books also cover choices such as Mylar vs jars, Desiccant packs vs oxygen absorbers, and accessories like a vacuum sealer and attachment for jars.

I haven’t invested in the the vacuum sealer yet. I decided to just go with jars I already had for now, and ordered some desiccant packs online. I’m not really looking to store for decades yet – merely a year or so to get started. Plus, double bagging and adding a third layer of Mylar seems like such wasteful packaging to me for my current needs. Besides, I’m in my mid-fifties. In twenty years I could be dead and not need 20 year-old green beans anyway.

So, with a couple years of experience under my belt, I can tell you some of the top reasons that I love dehydrating.

Canning low acid vegetables requires a pressure canner, which I haven’t delved into yet. Plus, my small efforts at gardening have not yet produced the volumes required to make that kind of canning practical. If I’m going to all that trouble and mess, three jars is not really worth the effort.

With dehydrating though, I can prep and set it up after work and let it do its thing overnight unattended with the batch often done by breakfast. So much less mess and bother than canning.

No freezer. No refrigerator. No electricity. Short term to long term storage depending on how you package it.

To give you an idea how much space dehydrated goods save – Two pounds of farmer’s market green beans, blanched and dehydrated, occupied the space of one half of an old spaghetti sauce jar in my cupboard.

Five pounds of frozen peas and carrots after dehydration fit into two old jelly jars with a desiccant pack each. That’s a lot of freezer space freed up. Multiply that by how many vegetable varieties I like to keep on hand, and pretty soon I’ve saved a small chest freezer worth of space. Not to mention how many commercial cans that would save on my shelf.

I usually cook for just myself. I hate buying things like potatoes in onesies or twosies. They’re cheaper by the bag. But I have a hard time using up an entire bag of red potatoes by myself before they start sprouting and going bad. If I slice or shred and dehydrate those potatoes though, they keep long-term in jars in my cupboard, just waiting to be turned into scalloped potatoes or hashbrowns whenever I feel like it.

It’s the same way with buying a whole head of cabbage. I can use maybe half a head for a recipe, and then the rest sits in the refrigerator. But if I slice/shred and dehydrate cabbage, then it’s always on my shelf, ready for coleslaw or soup or fried rice or cabbage and noodles. Nothing slowly growing mold cultures in my fridge. That’s a definite plus.

Is your garden producing more than you can eat? Dehydrate that zucchini for later casseroles, soups, breads, etc. No more sneaking a bag of extra zukes into your friends’ cars in the church parking lot just to get rid of it.

Why not just freeze the stuff you might ask? Freezer “space” is my first answer. I have a side-by-side unit with limited room. Freezer burn is my second answer. If you don’t use that stuff up within a few months, you end up with a frosted over block of inedible yuck. Power outage is my third answer. If you have an extended power loss due to weather, it can take a week or more to get things restored if you don’t have a generator. Meanwhile the “frozen” food supply that you can’t eat within three days or so goes to rot. My jars of dehydrated veggies sit happily in my cupboard and aren’t bothered by power outages.

You can easily dehydrate most store bought frozen veggies. In fact, it’s often easier than starting from fresh. Commercially frozen vegetables have already been blanched, so you don’t have to do that yourself. Just open the bag, dump them on your dehydrator trays, set the temp and go. The same goes for frozen fruit slices, although fresh works well too.

Though it sounds counter-intuitive, you can also dehydrate rice and pasta. The cooking and then re-drying process makes the end product rehydrate faster and easier, which is a plus if you are planning for camping or backpacking food. You add boiling water, but you don’t need the extended boil as with uncooked rice or pasta. That saves stove fuel.

You can even dehydrate meats to a certain extent. Though sometimes there are texture issues. I’ve not tried that yet beyond beef jerky. You can dehydrate cooked burger apparently, but you have to rinse it extensively to get rid of the fat to make it more storable. (Fat makes dehydrated foods go rancid very quickly.) Some people dislike the pebbly texture of dehydrated burger, but if you are backpacking or survival storing, texture can be a secondary consideration. In fairness, some people dislike the texture and flavor of home canned burger as well. It’s all in one’s individual tastes.

I’ve seen a website where a guy even talked about dehydrating sliced shrimp pieces to add to rice dishes. And lunch meat ham too. [link] That would certainly break up the chicken and beef monotony if you were eating dehydrated foods for an extended period.

Some people even make their own “instant soup” mixes and powders. I haven’t tried that yet either, but may do so in the future just as an experiment.

The only “bad” experience I’ve had so far has been with fresh blueberries. And it wasn’t even bad per se. They just took for-freaking-EVER to dry. I did all the tricks – freezing first, poking holes in the skins, etc and it still took like three and a half DAYS. High water content and a thick waxy skin has disadvantages. I may try cutting them in half next time. They taste good in oatmeal and cereal though. I want to try them in muffins next.

Pretty much the only foods that are not recommended for home dehydration  are dairy and eggs. There are safety considerations for both that make it better and easier to just buy commercially powdered eggs, cheese powder, butter powder and dry milk powder. They are readily available if you want to add them to your shelf supply. Amazon has a wide selection.

The main issue with using dehydrated foods is the rehydration that is necessary. But it’s actually quite easy.

I make lots of soups for work lunches, so rehydrating for that is virtually zero effort. You just have to remember to add more broth than usual because the veggies will suck up the juice, rather than releasing juice into the broth. Or you can rehydrate separately and then add to your soup when you are ready.

For other dishes you can rehydrate in cold water or broth in the fridge overnight, or add a little boiling water and let sit for a half hour or so, depending on what you are making and how big the pieces are. It’s really not any more bother than the forethought required in having to defrost something you had in the freezer.

Have I convinced you yet? I admit that I was a bit skeptical at first, but I am a convert now. My budget dehydrator has paid for itself several times over in savings on jerky, dried fruit snacks, and commercial storage foods. I’ve heard of people who have two or more dehydrators running several batches at once. I’m not sure I’m ready for that yet, but I’m having such a good time that I’m certainly not ruling it out! If you are thinking about getting into prepping, or even just want to build a deeper pantry, a home dehydrator is a good investment.