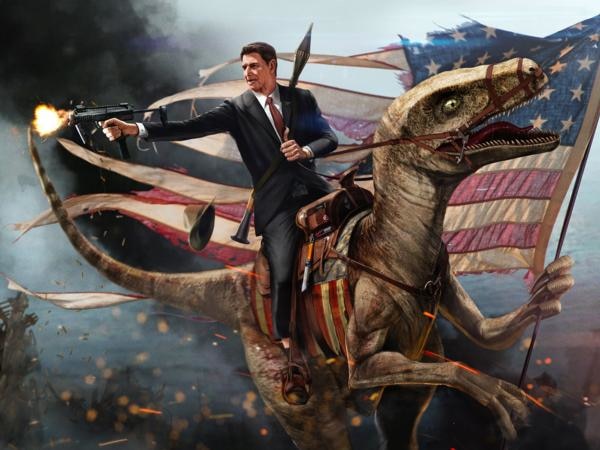 A Utah Republican on the floor of the Senate this week proved that not all heroes wear capes when he mustered everything from President Reagan with an Heckler & Koch to Aquaman to blast a popular progressive bill.

U.S. Sen. Mike Lee, who has represented the Beehive State on Capitol Hill since 2011, summoned the pop culture references to slam the “Green New Deal,” a sweeping package of economic and industrial restructuring aimed at reversing climate change.

While the GND is largely not a gun issue, there is no way we here at Guns.com could let the fact that Lee showed off an epic piece of art depicting the 40th President of the United States on the back of a Velociraptor with a tattered American flag, an RPG over his shoulder, and his right hand filled with a  Heckler & Koch MP7 SMG set to full Freedom.

“Now, critics might quibble with this depiction of the climactic battle of the Cold War, because – while awesome – in real life there was no climactic battle, with or without velociraptors,” said Lee of the image. “The Cold War was won without firing a shot. But that quibble actually serves our purposes here today…Because this image has as much to do with overcoming Soviet communism in the 20th century as the Green New Deal has to do with overcoming climate change in the 21st.”

The piece, by Michigan artist Jason Heuser, has been floating around since at least 2012 and is one of several similar works in the same vein that run the gamut from George Washington with an anachronistic mini-gun to Teddy Roosevelt taking on Bigfoot with an M60 belt-fed GPMG.

Ironically, as the first commenter to this post on social media will likely point out, Reagan signed the Hughes Act in 1986 which banned civilian ownership of newly produced select-fire/full-auto weapons moving forward, making his choice of ratchet in the image seem a bit acidic to those against the NFA. Nonetheless, while employed as a Hollywood actor, the future commander-in-chief did serve as an officer in a horse-mounted cavalry unit in the California National Guard, so the dino-mount doesn’t seem that far off base.

As for Lee, he has some pretty solid Second Amendment creds.

While in the Senate he has voted against bills to regulate 3D printed gun files and expand mandatory background checks to cover most private gun transfers. In doing so, he penned national op-ed pieces slamming anti-gun legislative and regulatory pushes, saying “Gun control isn’t about guns — it’s about control. And the right to bear arms isn’t about the arms — it’s about the right.”

Lee, whose brother is Utah Supreme Court Justice Thomas Lee, hails from a legal background and was mentioned last year as a possible nomination by President Trump to the U.S. Supreme Court.

If only he could get to work via tauntaun, which he says while they are “not as efficient as planes or snow-mobiles, these hairy, bipedal space lizards offer their own unique benefits.”

The solution to climate change is not this unserious resolution, but the serious business of human flourishing – the solution to so many of our problems, at all times and in all places: fall in love, get married, and have some kids.https://t.co/N2gYdJFldt pic.twitter.com/ekoFlaECSd 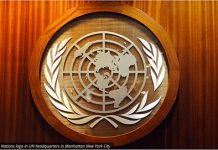 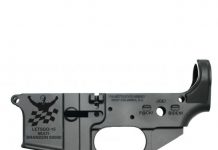 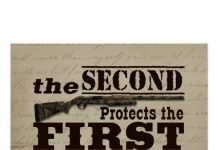