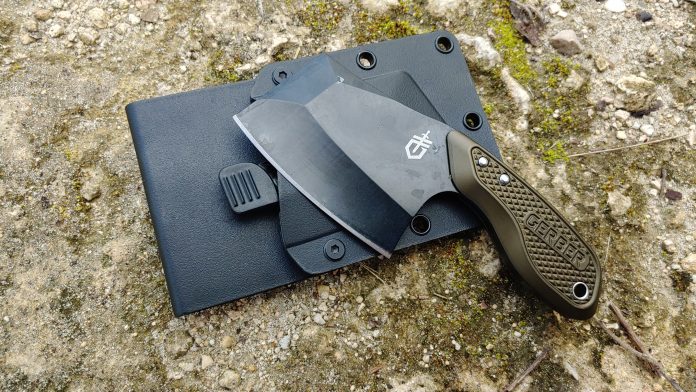 Tactical cleaver sounds lame, like something out of the world of the Walking Dead fan club. I know it sounds terrible, but the Gerber Tri-Tip breaks the zombie fanboy idea of a tactical cleaver and delivers you a handy little tool. Admittedly I was drawn to the Tri-Tip because I thought it was weird, and it was cheap, so I snatched it up. The Tri-Tip is a small and compact clever that’s not overtly massive and is made to be easily carryable and turns out it’s immensely useful.

The Tri-Tip features a short 2.875-inch blade with a 2.75-inch handle, for an overall length of 5.75 inches. The little fella weighs only 3 ounces. This cleaver is a full tang design with machined aluminum grip scales that are quite heavily textured and have a cut out for a lanyard should you need one. 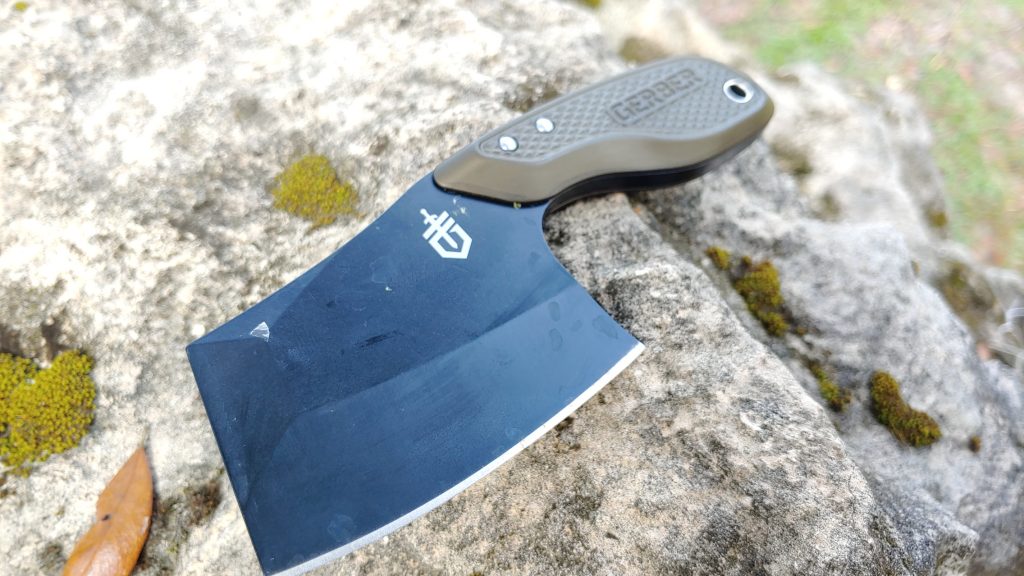 The blade is made from 7Cr17MoV, which is a pain to type and seemingly something that Spongebob meme would say. This steel is a cheaper Chinese stainless steel, but that doesn’t mean it’s terrible. When you consider a cleaver’s tasks, then this steel is fine. It’s corrosion-resistant, straightforward to sharpen, and gets sharp enough to cleave things. The downside is that the steel itself is not very tough and can’t beat something like a survival knife would be tasked with. 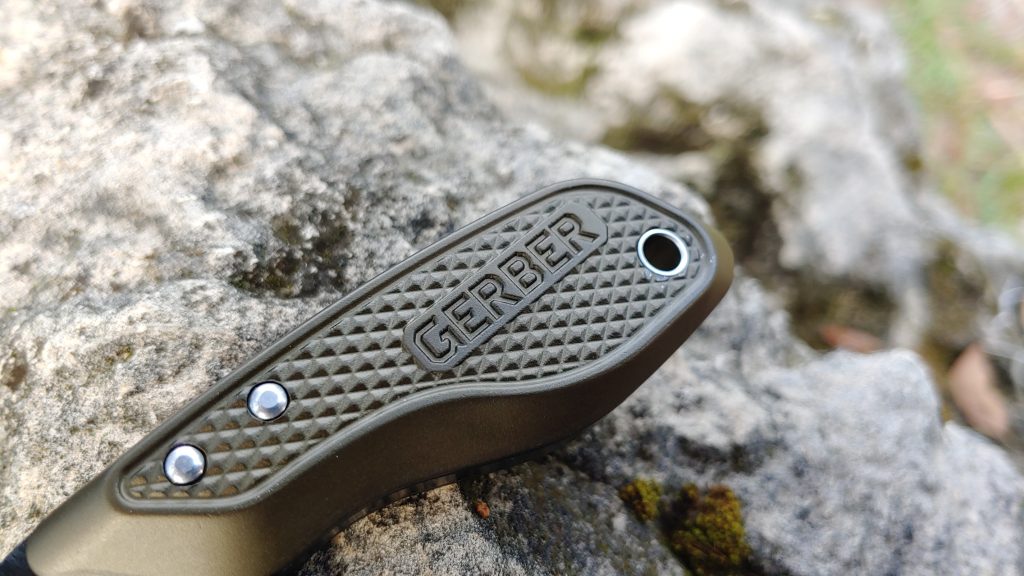 The Tri-Tip’s blade design gives you both a cleaver blade and a chisel edge for scooping and scraping. The blade has a lovely satin finish that is seemingly tough enough to survive the world of cleaving. The handles come in both green and black.

A small tactical cleaver would seemingly have little use to it. It’s not a weapon and would be a poor improvised choice for a weapon. This is no survival knife, so what is the point?

Well, it’s a lightweight knife perfect for preparing meals around the campfire. It could be used to clean fish, rabbits, squirrels, and even deer. You can strip the meat from bones for prepping a meal that you just killed and chop it up into delicate portions for easy eating. The cleaver is even perfect for chopping through veggies and slice and dicing. 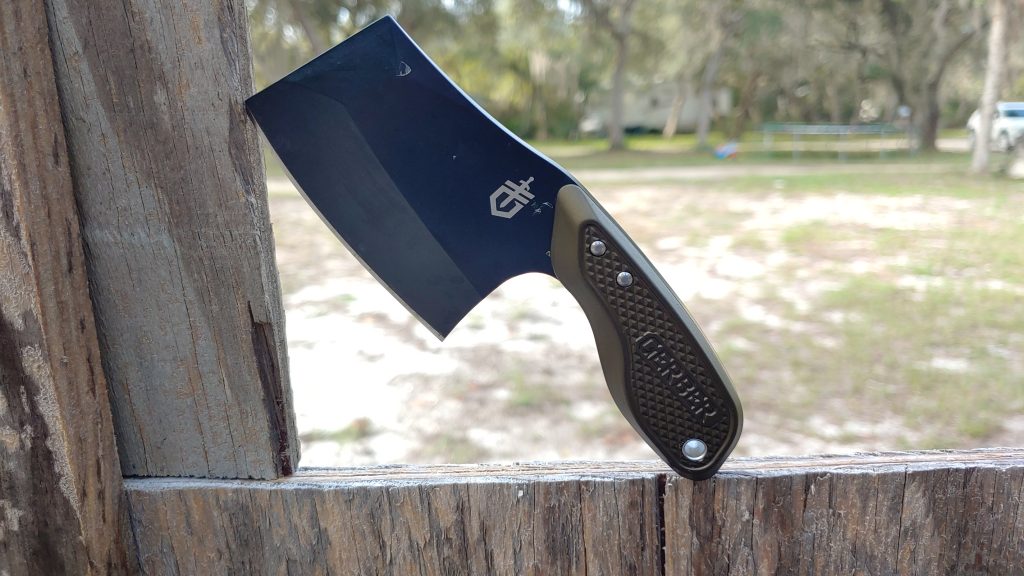 The Trip-Tip is a prepping tool and allows you to prepare food better than a pocket knife or traditional fixed blade design. The super small and lightweight design makes it easy to carry or stash in a pack, and it hardly takes up any serious room. I’m not saying your fixed blade knife or pocket carry folder couldn’t do these tasks; I’m just saying the Tri-Tip does them better. It’ll speed up the process, save some wear and tear on your more practical knives, and hardly takes up any room.

The deep belly makes the cutting edge deceptively long, and it cuts smoothly through meat and veggies of all types. The blade is plenty wide with a good swedge to allow you to cut through the entirety of whatever is in front of you. Thick stacks of meat or thick veggies like potatoes don’t stand up to the Tri-Tip. The handle is a three-finger design, so don’t expect much chopping power. With the lightweight design, you won’t get it anyway. This cleaver works not by brute force but by using a rocking motion to push the blade front to tip through your material. 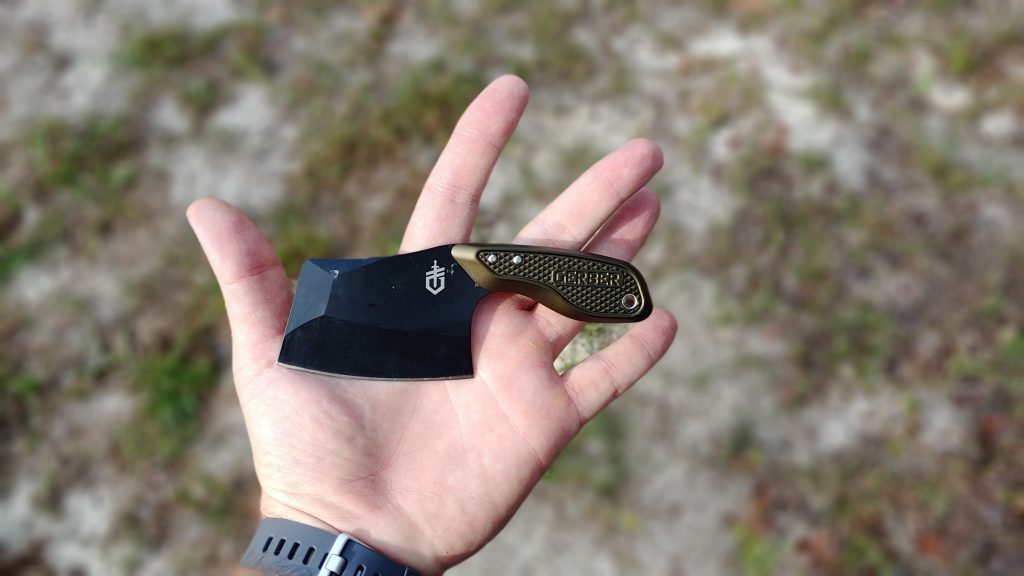 I’ve used it for cutting, slicing, and dicing chicken breast, both frozen and raw, through thick flank steak, venison chunks, romaine heads, onions, peppers, tomatoes, and basically all the stuff I’m sliding into my world-famous fajitas. This is a cooking and butchering tool. Between the trout, rabbits, and squirrels it’s fell victim to, I can attest to it’s cutting ability. With deer season around the corner, maybe I’ll be lucky enough to bag a buck and update this article based on that.

Even outside of camp cooking, I’ve found myself using this slice and dicer in the kitchen for just everyday tasks. It’s a wonderful little tool that’s comfortable to use and makes big hunks of food into little hunks of food in short order. In keeping with family tradition, men are cooks, and my 9-year-old son is my assistant in the kitchen.

He, under careful supervision, cuts through a number of vegetables for our various meals. His smaller hands wield this cleaver better than any kitchen knife. 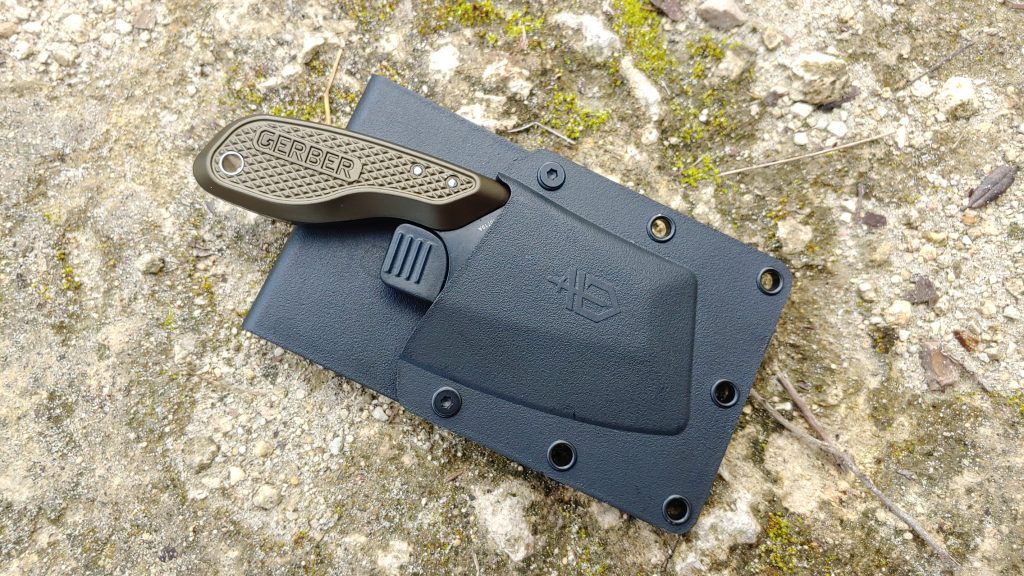 It allows you to carry the blade on your belt or upon a backpack in a scout carry position. Or hell, toss it in your pack, and you won’t need to worry about it getting lost in the pack. The sheath is very nice for the Tri-Tip. Gerber should use this design on other knives, well, at least where they can.

The Gerber Tri-Tip is an excellent cleaver and is perfect for both inside the house and around the campfire. It could be paired for basic knife tasks, but it’s best for cutting foodstuffs and butchering game. This cheap little 30 dollar knife isn’t for everyone but is an impressive piece of gear for the dollary-doos.