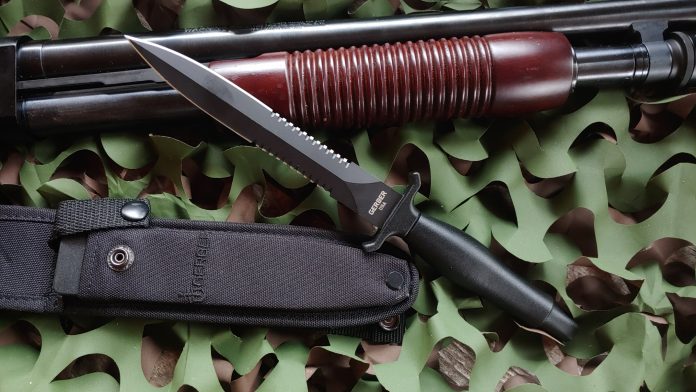 The Gerber Mk2 is right up there with the Ka-Bar as far as legendary fighting knives go. The ole Mk2 came to be in 1966 and was produced until 2000. Recently Gerber has revitalized the knife in limited numbers. The Mk2 was designed by Bud Holtzman, a retired U.S. Army Captain who created the blade based on the Roman Mainz Gladius. Archaeologists dug up the Mainz Gladius in 1866, and it was likely issued to a high-ranking Roman Officer. Take a peek at the Mainz Gladius, and the inspiration for the Gerber Mk2 is clear.

Both feature a long double-sided blade with a dagger point. The Gerber Mk2 mixes both the classic dagger design with a modern tactical look. There are numerous variants of the Mk2, and mine features serration on both sides for extra cutting ability. Gerber added the serration after Base PXs refused to sell a fighting knife because it was distasteful. Yep, the store is a place dedicated to killing America’s enemies found the Mk2 objectionable. 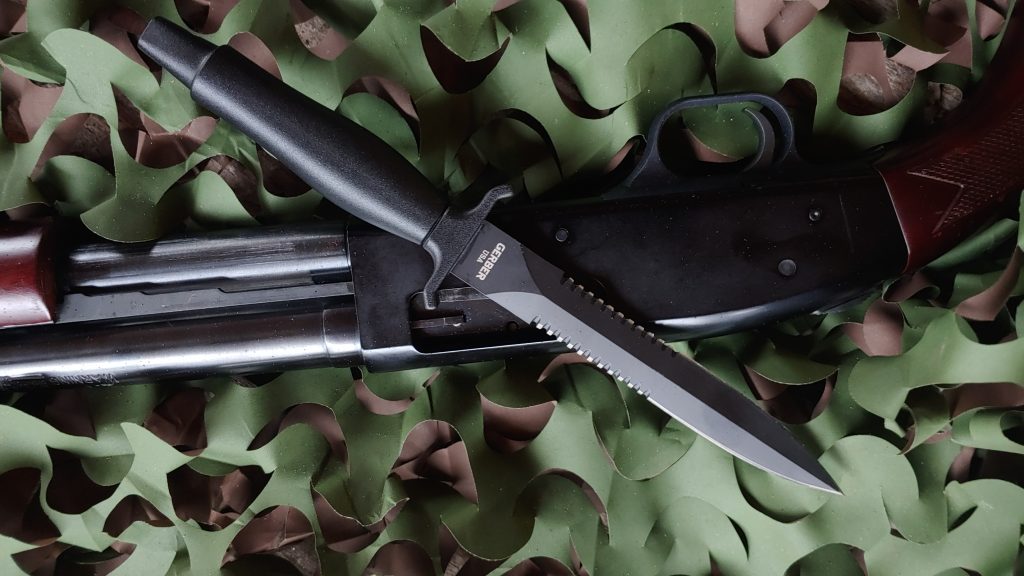 The added serration made the Gerber Mk2 a ‘survival’ knife and it resumed sales on military bases. The Gerber Mk2 was insanely popular with troops and second only to the famed Ka-Bar. Gerber’s website shows tons of reviews of this knife from guys who claimed to carry it during the cold war, and I find them believable because none of the stories are Chuck Norris inspired commando fiction. 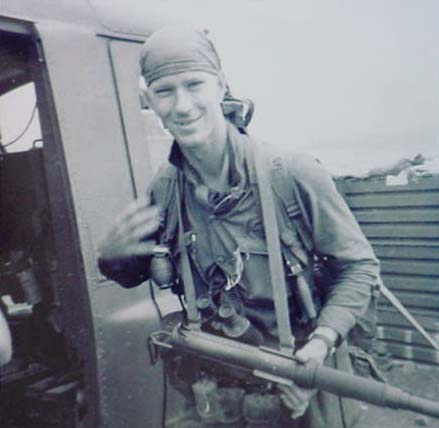 There are numerous photos of MACV SOG types carrying the Mk2 in Vietnam. According to the book Six Silent Men, the MACV Recondo School’s honor graduate received a Gerber Mk2. 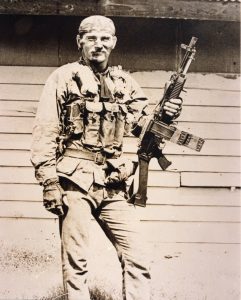 The Mk2 has come and gone from Gerber’s line up in various quality and price points. The current incarnation is relatively affordable at around 79 bucks, but it has noticeable differences from the original.

The modern variants are made from 420 HC stainless steel instead of L6 tool steel. L6 is a much better choice for a fighting knife but would drive the price up. Personally, I’d pay the higher price for the L6 steel, but the 420 HC steel keeps the Gerber Mk2 priced under a hundred bucks. Most people buying them are likely buying them for their historical significance and not as a practical knife. 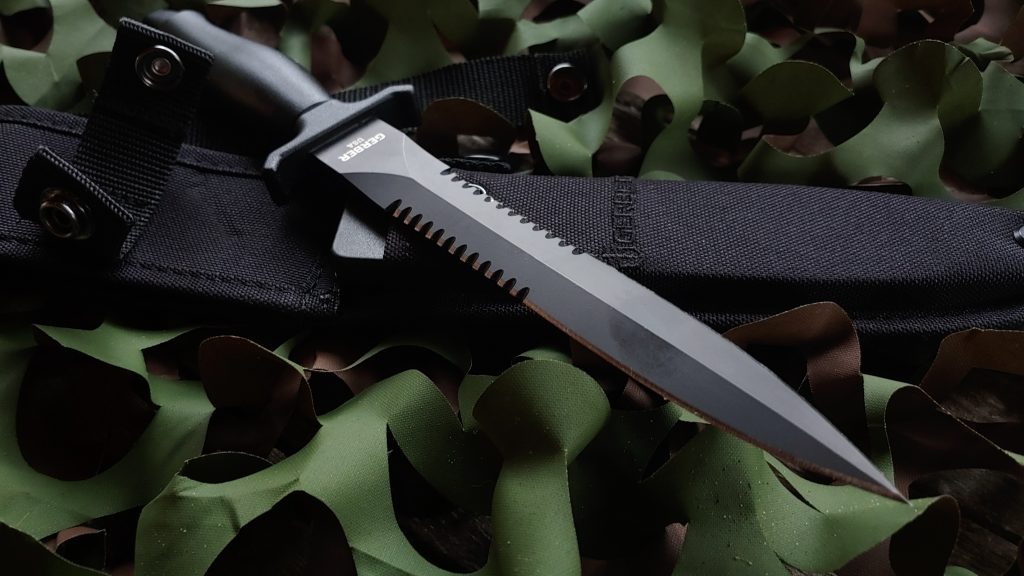 420 HC steel isn’t terrible. For a survival knife, it works well and is super resistant to corrosion. It’s used commonly in machetes and hatchets for a good reason. The steel is easy to sharpen and can take some abuse. As far as cheaper steels go, it’s one of the better options.

Breaking Down the Mk2

This is a big knife, and the blade is 6.5 inches long, and from a combat perspective, that makes sense. In 1966 we weren’t that far departed from the hand-to-hand fighting in Korea, World War 2, and World War 1. Combat knives meant the blade needed to be long enough to strike something vital regardless of the angle from which the knife penetrates. That’s why the Ka-Bar has a 7-inch blade as well. 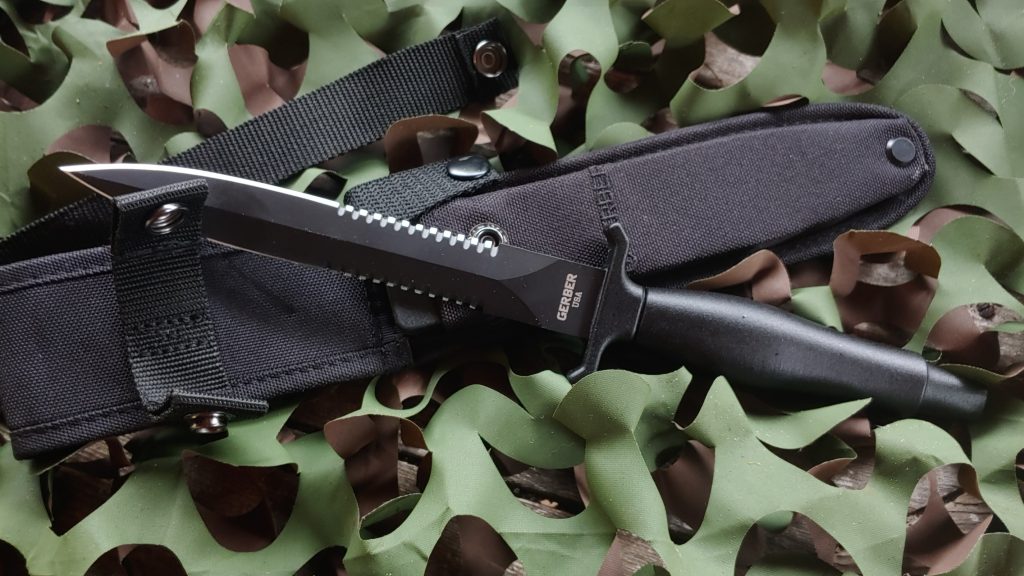 The dagger tip design could be used to slash, but this is a stabbing knife more than a slasher. The handle inspires you to use a fencing style grip, much like the famed Fairbairn-Sykes V-42 dagger. The handle and blade design could even make a good spear with a good stick and some solid lashing.

The serration is quite capable of doing some serious sawing. If I had to dig a fighting hole, the serration would chop through roots nice. The Mk2 makes short work of thick ropes, rough leather, and thick uniform style clothing. 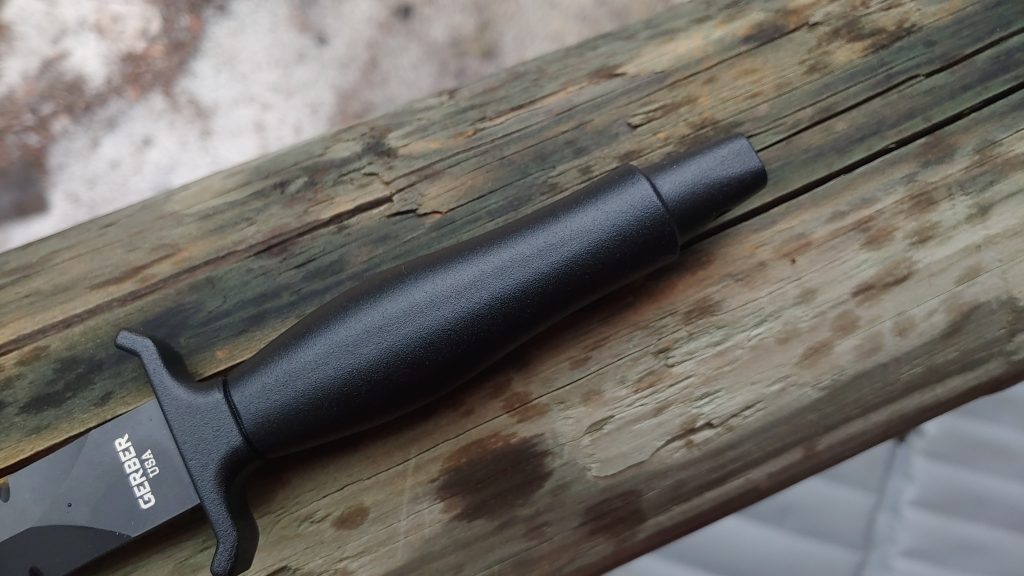 Gerber makes a die-cast aluminum handle for the Mk2. G10 is great, leather-wrapped metal is great, but there is an extra degree of durability with an all-aluminum handle. Plus, it was 1966, and we didn’t have the technology and innovation we have today. It’s rounded and comfortable enough.

The downside is the grip isn’t very aggressive. It’s smooth without checkering of any kind. There is an aggressive handguard that prevents your hand from sliding into the blade. The lack of checkering means saying bye-bye to hotspots when hard work is at play.

The Gerber Mk2 is a sweet reproduction of a historical knife. If you are a knife nerd who likes historical knives, this is for you. If you want a dedicated survival knife, then go for something more modern. The ESEE 4 is objectively a better survival knife, but the Mk2 is a cooler knife. Also, remember the knife scene in Aliens? Bishop was tossing around a Gerber Mk2 like an absolute beast.

That might’ve been the sole reason I bought this knife.