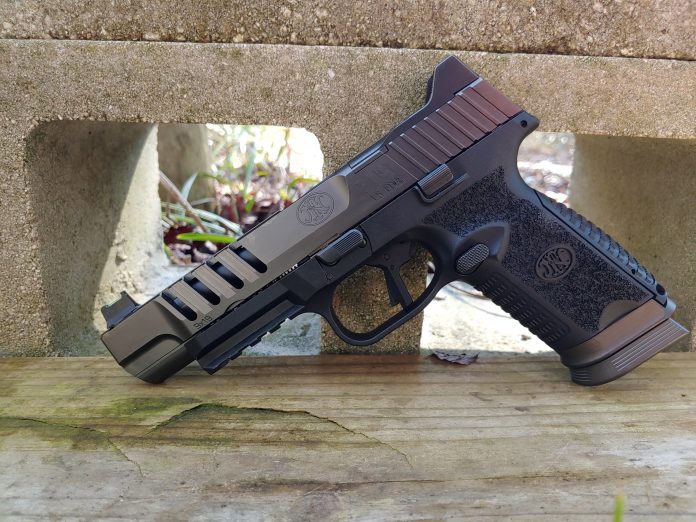 FN’s handguns are criminally underrated. FN produced what’s largely accepted to be the first optic’s ready factory handgun. The FNX and FNS were great little guns that never got the appreciation they deserved. However, that changed with the FN 509. FN threw their full force behind the gun and have produced a number of variants, including the typical size variations, as well as a tactical model, and now we got the big one, the FN 509 LS Edge.

The LS Edge Is a Big Boy

This gun takes things to 11 size-wise. The LS Edge extends the barrel length to five inches and the overall length to 8.2 inches with a weight of 31 ounces. The LS Edge ain’t no little tike and is intended for the home defense, military, and competitive market. Is it concealable? Not easily, but anything is concealable with the right holster, belt, and garment. The LS Edge slides into the Phlster Floodlight without issue. 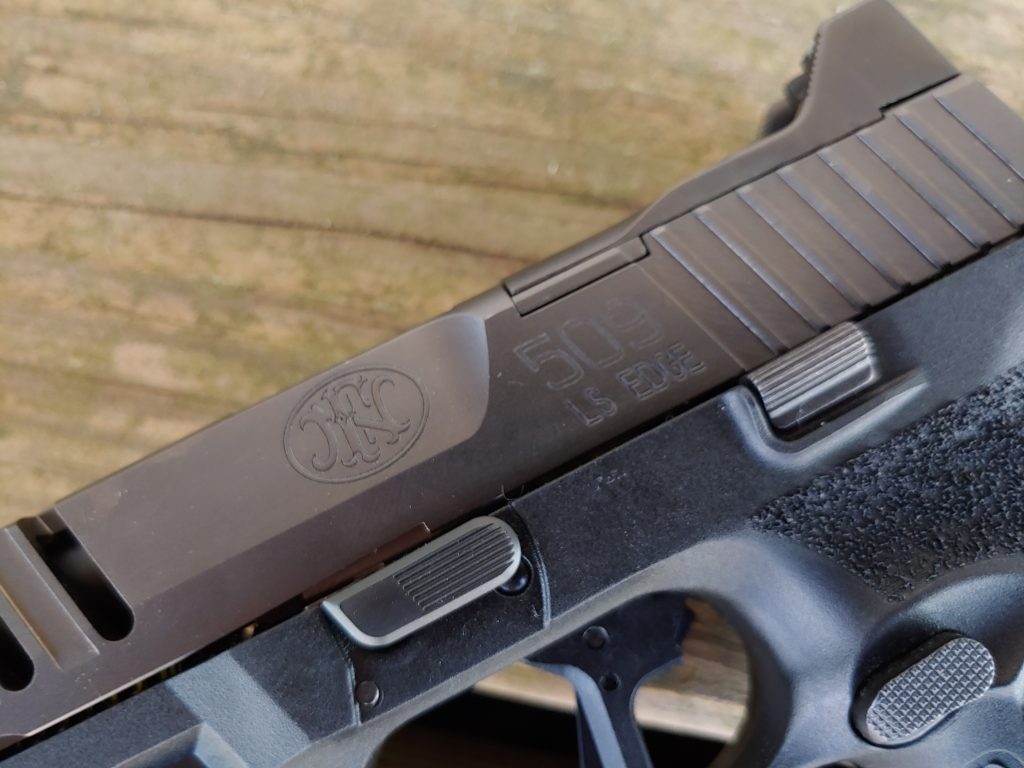 A long slide does a lot for you. Sure, it eeks out a little extra velocity, but more importantly, it provides a longer sight radius, which measures out to 6.7 inches. Plus, more barrel and more slide can help enhance control.

The full-length grip and suppressor height sights grant the gun a 5.9-inch height overall. Since it’s not afraid to be big, the grip width is 1.35 inches. 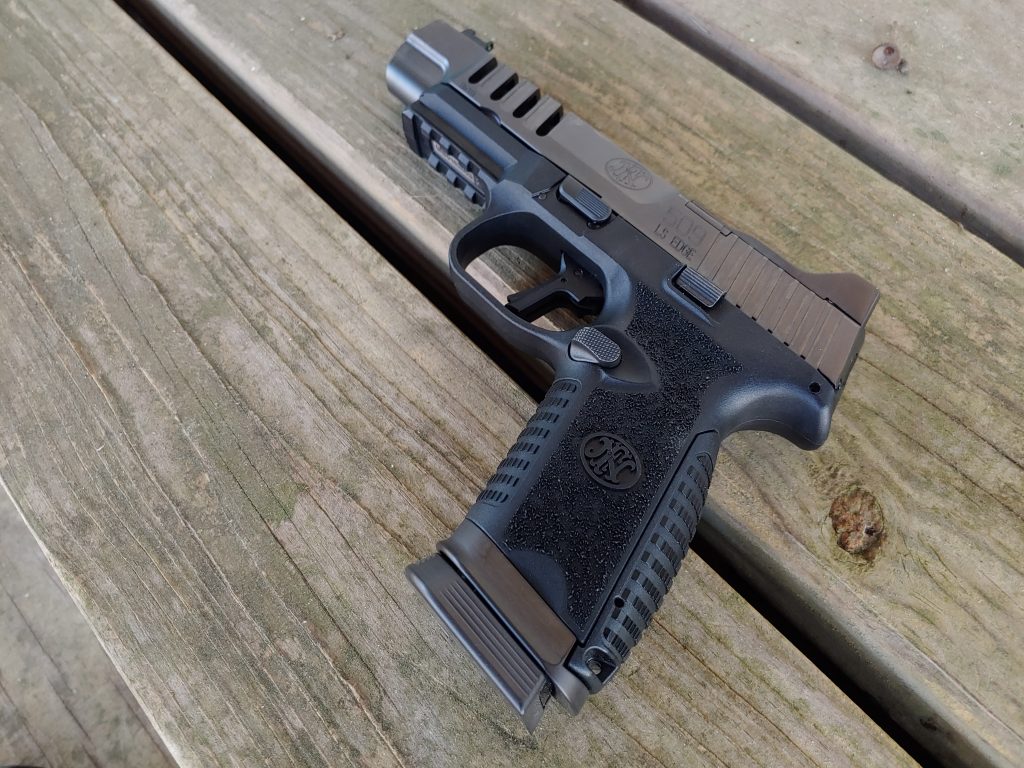 If you’re unfamiliar with the FN 509 series of pistols, let’s break that down. The 509 series started life as an entry into the Army’s modular handgun contest. Like most entries, it was a polymer frame striker-fired, 9mm pistol that utilizes a double-stack magazine. Pretty standard, and the weapon performed well enough that Brinks adopted the pistol, and recently so did the LAPD.

FN created the LS Edge to be the top-of-the-line 509 series pistol. They took a 509 and gave it a custom shop-style workover that results in a fantastic firearm that’s chock full of features. First, it’s optic ready, and I mean truly optics ready. FN installed a system that allows the user to utilize dang near any optic they want, from Vortex to Trijicon. On top of that, the LS Edge wears suppressor height sights from the factory.

The front sight is super thin, with a high visibility green insert. The rear sight is blacked out, and the two contrast off each other well. 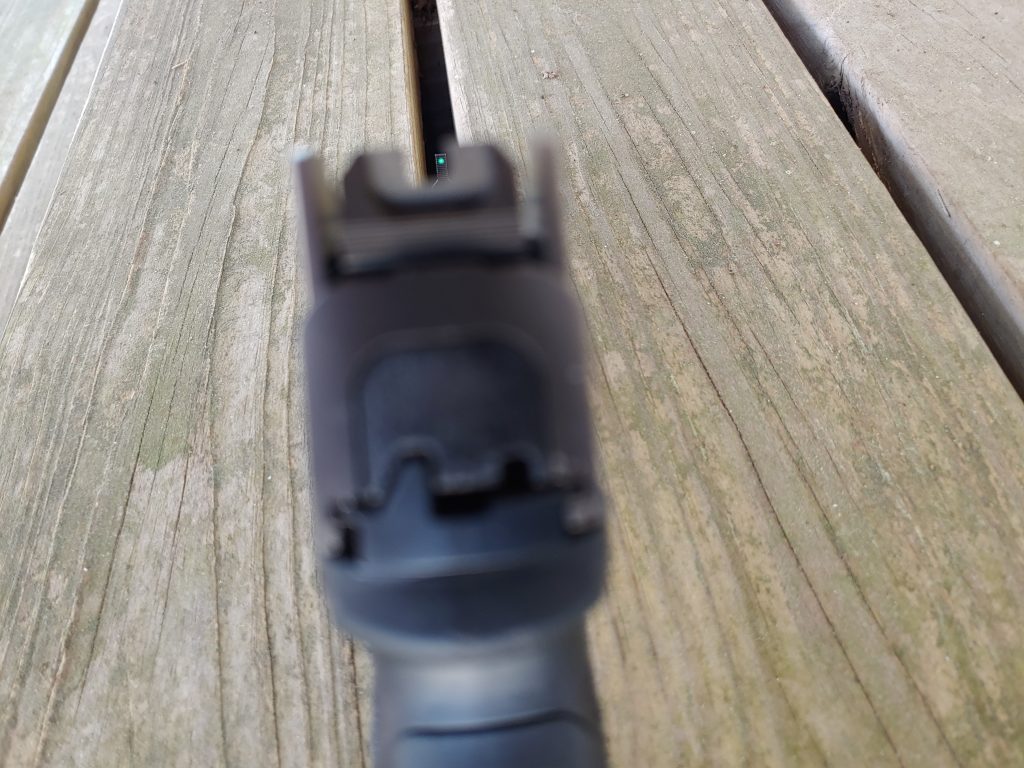 The optic’s plate contains a pair of wings that do two things. They protect the tall rear sight and offer a platform to cock the weapon off of belts, tables, or whatever else makes you feel like John Wick. The slide sports eight lightening cuts to reduce weight and improve balance.

The frame rocks the typical rail, as well as ambidextrous slide locks, a reversible magazine release, and a flat-faced trigger. The grip sports a super aggressive grip texture, and at the bottom, a slight magazine funnel to speed up reloads. Like most modern pistols, a set of interchangeable backstraps allow you to adjust the grip for size and shape. 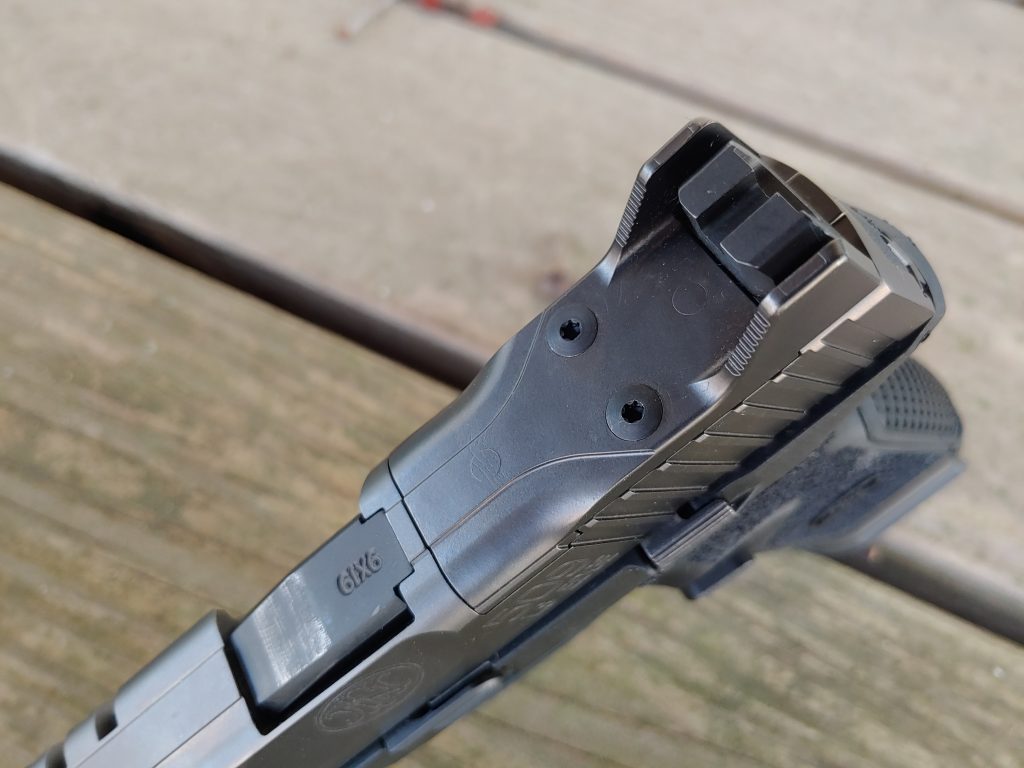 I tested the LS Edge for accuracy as it came, with just the iron sights. That thin, high visibility front sight works very well at long range. It falls between the wide U-shaped rear sight with plenty of visibility remaining. It’s well suited for both long and close-range shooting. I started with a 10-inch gong at 15 yards and continually moved rearwards in five-yard increments.

It wasn’t until I hit 55 yards that I missed more than I hit. This was slow fire with iron sights, and the weapon performed like a champ. I got giddy hitting that 10-inch gong over and over. The thin front sight allowed me to keep seeing the target as I moved further and further from the target.

For some faster, more combative shooting, I started blasting away for speed at 5, 10, and 15 yards at target, both large and small. I ran some of my favorite combative drills, including the failure to stop drill, the box drill, and even the old school El Presidente.

Those bright green front sight and all the space it has between sides of the rear sight make it fast to align well enough for close-range shooting. After a few practice runs, I scored El Pres runs in right around seven seconds with clean accuracy into the A-zone of a target. 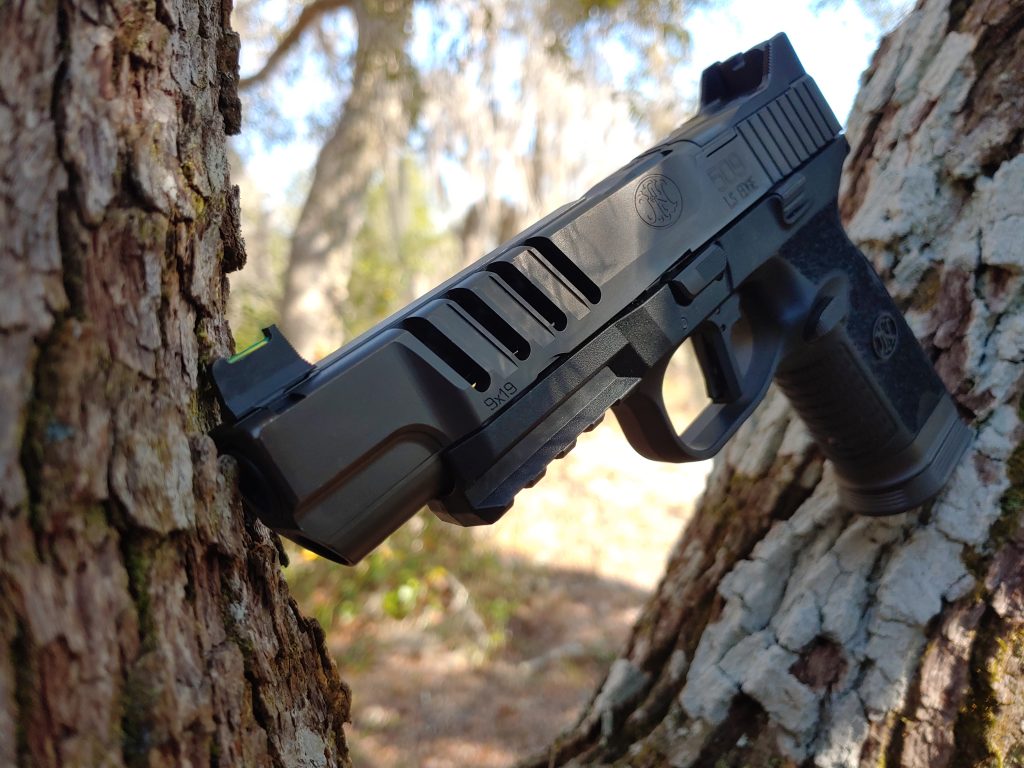 Those same sights made the LS Edge quite easy to shoot small targets and small circles. Running Dot Torture and iHack feels easy with these sights. The flat-faced trigger helps a fair bit. It’s not the smoothest trigger. The take-up is gritty, but the trigger break is clean, and the wall presents just a slight hump before firing. The reset is short and tight, with a tactile and audible noise.

Big guns are always easy to control, and the LS Edge is no different. When you go full-sized with a 9mm, you never have to worry about recoil or muzzle rise. FN’s selected cuts lightened the slide, and this helped with felt recoil reduction. Does it have a major effect? I’m not sure, but the LS Edge has very little recoil and complete controllability.

The big long slide and the high vis sights make it easy to track, and those follow-up shots can be quite quick and always on target. 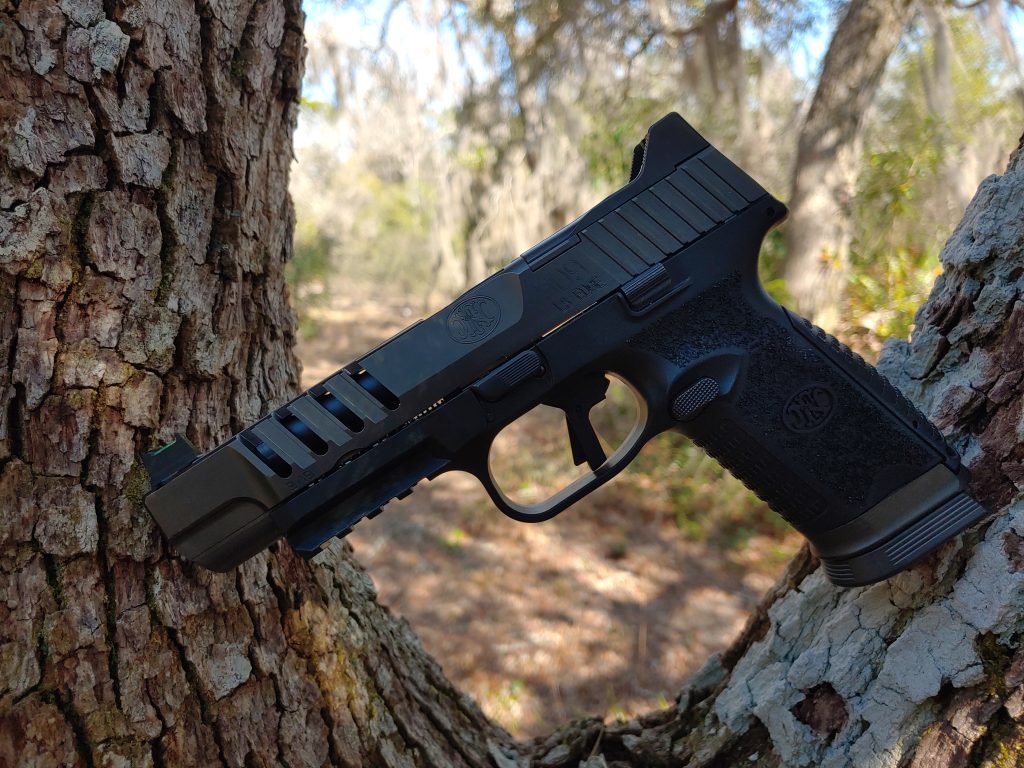 Well, almost always, I’m far from a perfect shooter. However, the LS Edge makes shooting easy, if that makes sense. Bigger guns tend to do that, and XL-sized 9mm guns like the LS Edge do it well.

A variety of ammo wasn’t at my disposal, but I had plenty of brass-cased Global Ordnance 9mm for disposal, along with some older SIG JHPs I rotated out of my carry gun. The cheapest ammo I had was some Blazer aluminum. The gun didn’t seem to care what round I fired. It just ate and ate without complaint. Kinda like me at a Chinese buffet. 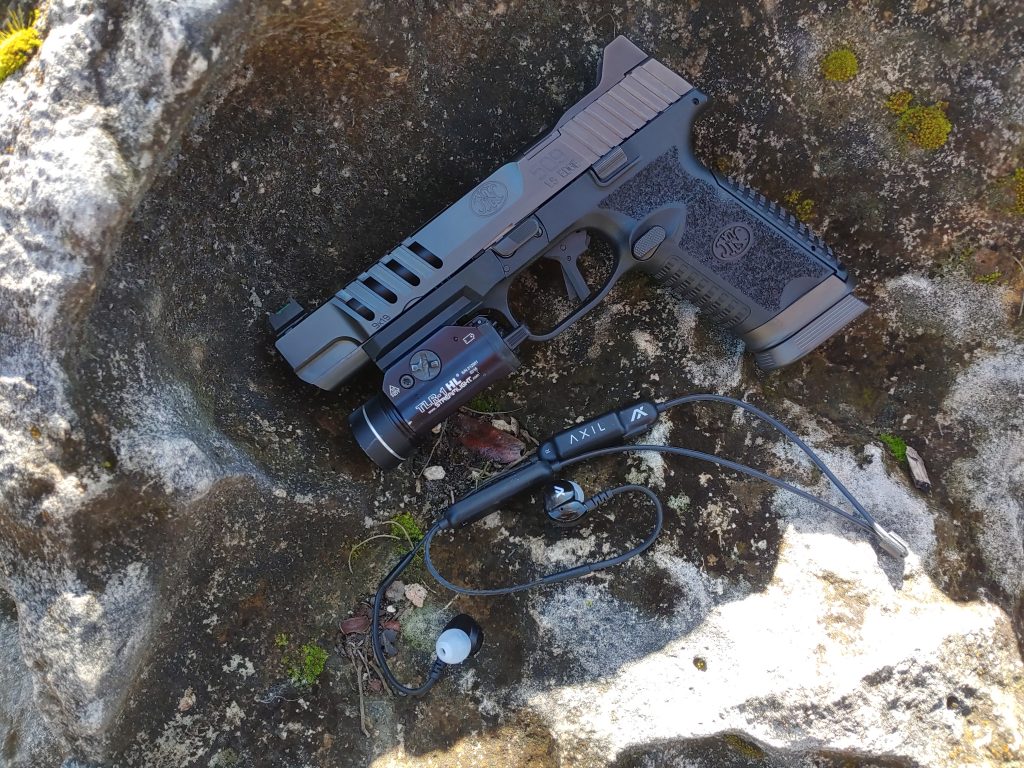 The LS Edge provided 509 fans with a high-end, half-custom gun that’s chock full of features. The LS Edge does come with that custom price point with an MSRP of $1,569 dollars. That might be a tough pill for some to swallow, but it’s out of the box, ready for home defense and competition use.