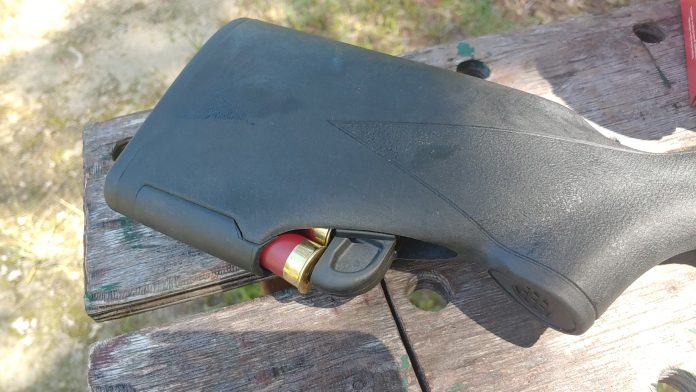 Carrying spare ammo with a shotgun isn’t the easiest task out there. One of the often proclaimed problems with the shotgun is its lack of capacity. This has led to things like side saddles and the original Speed Feed stock. The Flash 5 takes a little inspiration from the old Speed Feed stocks, but the comparisons would be limited to the idea of keeping ammo in the stock.

The Flash 5 might keep ammo in the stock, but it does it in a means that’s much better than the Speed Feed stocks. Instead of shoving two rounds into two tubular magazines, the Flash 5 keeps five rounds in what’s essentially a magazine loaded into the stock. As the name implies, the stock holds five rounds of ammunition and feeds out of the bottom of the stock. The stock is available for Mossberg 500 series shotguns and Remington 870 shotguns.

The Flash 5 is an interesting design because it not only has to be a good source of extra ammo but a solid stock. Tactaload designed the stock to accommodate the three most common 12 gauge shell sizes, 2.75, 3, and 3.5 inches. To accommodate the long boi 3.5-inch shells, you’ll need to remove an internal spacer. 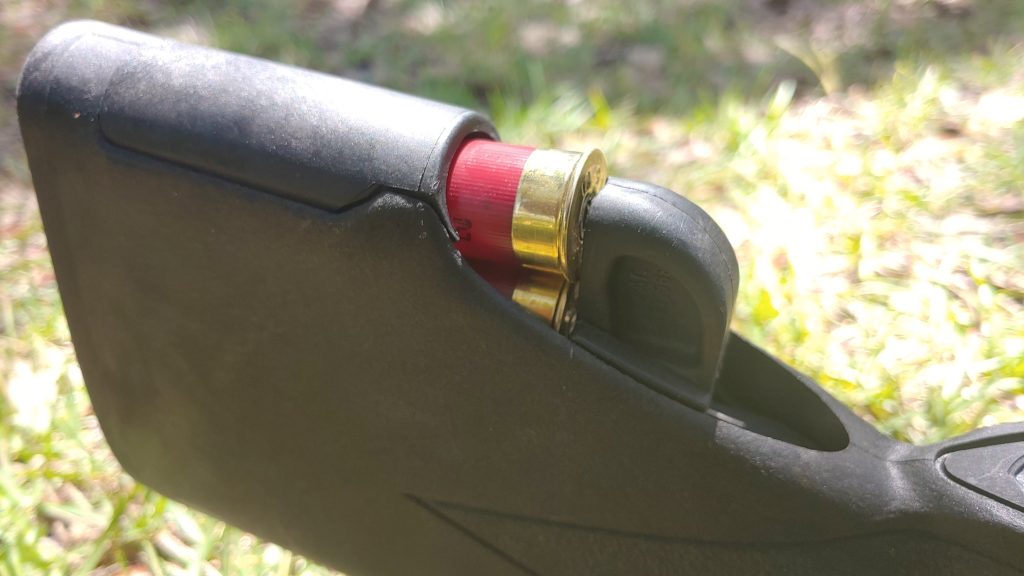 That wasn’t a concern for me. I’m a 2.75-inch fella myself. The stock uses a spring with a follower as well as a spring-loaded gate to keep the rounds from popping out before they are needed.

This setup does offer a few benefits over the side saddle. Most obviously, this setup makes the ammo source for spare rounds ambidextrous. Side saddles are distinctively set up for right-handed shooters 99% of the time. 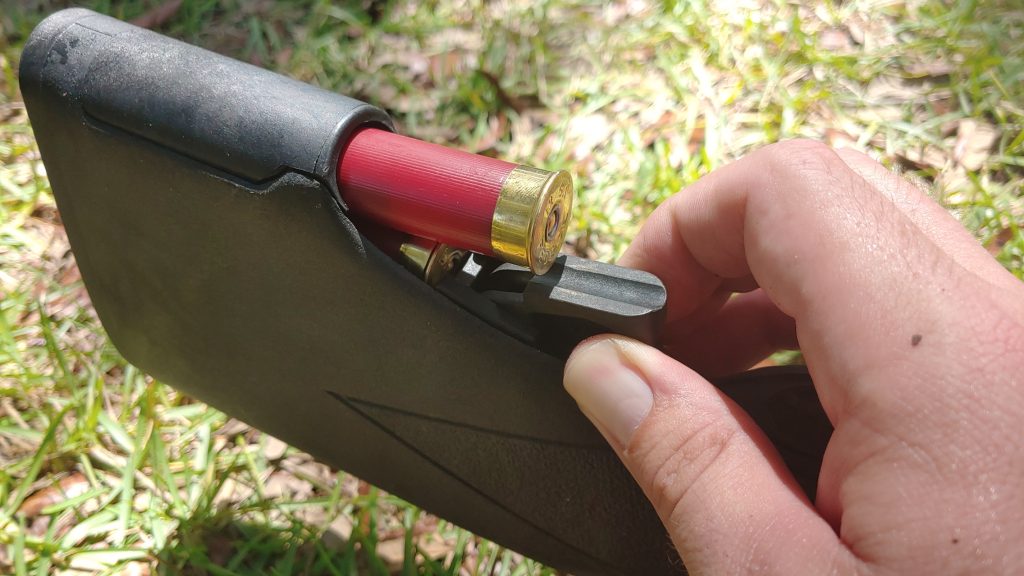 Your spare shells are also protected from the environment and shielded within the stock. This prevents them from getting beaten up, rusting, or deformed by environmental exposure. The shotgun also remains streamlined with something hanging off the side.

Reloading with the Flash 5

The setup is simple and fairly intuitive to use. The brass and rims face toward the shooter. The spring-loaded gate keeps the rounds in place, but when the shooter grabs the rim, it’s easy to press down and is a natural part of your draw stroke. The Flash 5 is rapid to reload and is a fair bit faster than a side saddle reload.

Reach rearward with your non-dominant hand with your pointed finger pointing at you. Pinch and grip, and as you do, rotate your wrist forward, and you can shove the round into the tube. Where the Flash 5 is a bit slower than a side saddle is in an emergency port reload. It lags behind by half moment or so but isn’t painfully slower.

Grip, rip, and reloading isn’t difficult. The internal stock magazine ensures the next round is always ready. The rounds stay put until drawn as well. Even butt stroking my Century BOB punching bag didn’t dislocate a round.

The Flash 5 as a Stock

Your stock is a fairly important part of your shotgun, and a good source of reloads doesn’t beat out a well-made stock. Tactaload did a fantastic job of designing the stock. It’s a traditional stock with what appears to be a fat bottom. The stock itself can be adjusted with optional spacers, and the LOP can be as short as 12.5 inches.

There are multiple butt plates, including a recoil and a tactical version. The recoil pad extended the LOP about an inch, so be prepared for that. I stick with the tactical variant for a shorter LOP overall. 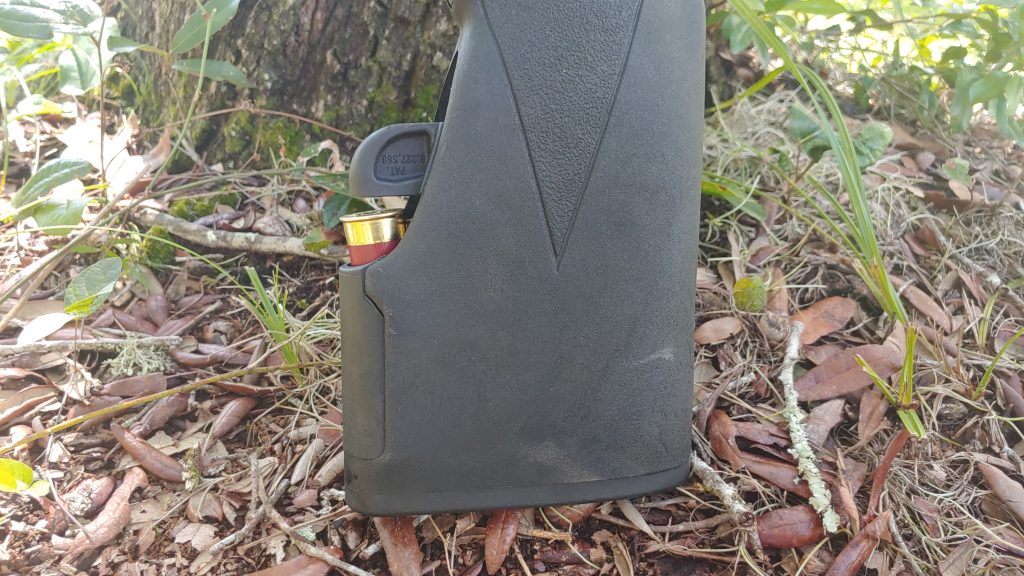 The stock provides a nice comb for using either optics or iron sights and supports a nice cheek weld. I would texture it a hair bit more. When using the push-pull with sweaty hands, I felt the grip slip a bit. September in Florida will do that.

The original setups did not include a sling swivel setup, but the latest models have that as an available upgrade. It’s a modern take with all the modern options shotgunners love and appreciate.

Keeping your shotgun topped off in the middle of a fight is a must. For home defense carrying spare ammo isn’t easy, and it has to essentially be locked onto the gun for it to be of any value. The Flash 5 keeps things locked to the gun much like a side saddle, but with a few advantages. It doesn’t have to be an either or situation either, as I’ve attached both to my Mossberg 590A1 and like the spare ammo it offers. Check it out here.