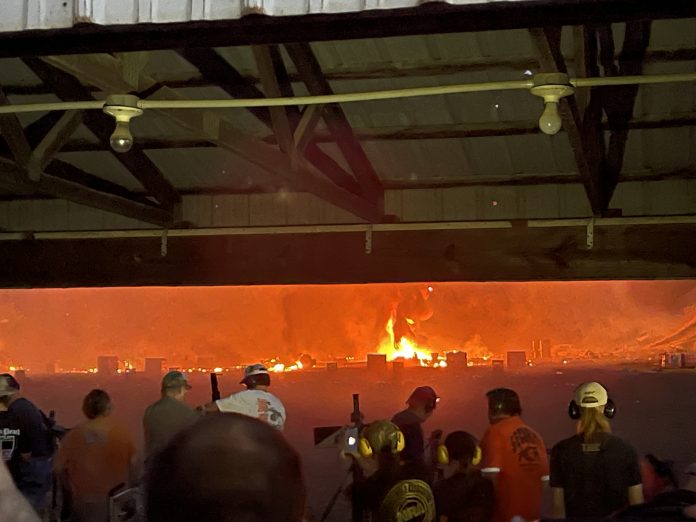 It was only a few years ago that we were laughing at the media’s coverage of the Civil War in Syria as some knucklehead shared footage from KCR’s nightshoot (pictured, the 2021 night shoot).

But now, after 25 years and 50 total events, the shoot is coming to an end. Knob Creek isn’t the only MG shoot in the nation but it was one well wet up as an exchange and good times event.

Rolling in is like going to the county fair, but with tracer rounds, and the tables are stocked full of stuff… so much stuff… like lots and lots and lots of stuff.

Stuff is the perfect word. Shit is not the word, there is too much of crazy random value there, but guns and gear certainly doesn’t cover it nearly well enough either.

Find a ‘Street Sweeper’ shotgun and an auto P90, both letter transferable and nicely priced, on the next table right by a stack of mundane uppers for sale without BCG or charging handles? Check.

30mm Prototype Cannon laying vertically in the corner? Got it.

And, of course, a bevy of fully transferables and law letter transferable NFA select-fires. Some really cool, some in great fresh off the wrack shape, some in rougher condition.

Absolutely. To the fences. Packed.

Wait times could reach 3-4 hours to get into the venue and vehicles were parked outwards of a mile from the access road and folks walked in. The range was hoping with a shoot every 45 minutes roughly. There is a lower range where we could rent all the normal handheld type items. The upper range would occasionally roll larger items.

This was the ultimate ‘mag dump into trash’ event. It is pure turn money into noise and fun. And it was absolutely packed with people wanting to see the final send off. For this is the last one at KCR, the event organizers are tired after doing it for 25 years and I don’t blame them. The logistics of these events are absolutely exhausting.

That said, there will probably be another swap meet or event that springs up somewhere sometime in the future. The market for fun and full-autos is still alive and well. You never know when you’ll walk by a table full of SCAR SBR barrels for a damn good price… and then run back later to get them and they’ve sold because of course they have.

I did leave with a couple new toys, a healthy respect for ear protection, and wishing the ammo market would come down a little in price because bulk buying even at good prices ‘for today’ is rough on the checking account.

Overall, good times were had. Deals were made. Stuff got blown up.