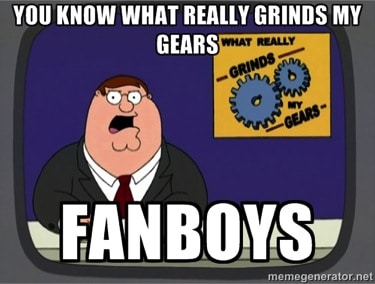 Keith Finch is back again for another article. I say this to let you know this is a Keith Finch article. That is right Keith Finch wrote this not me. So when your panties are all bunched up because your Glock, Sig, HK, M&P or 1911 is painted as something other than the mythical doombringer you thought it to be, you can direct your hate mail at Keith Finch and not me.

No seriously if you are a gun Fanboy (male or female, tendency is almost universally male) then I will most likely hate any amount of time spent talking with you about firearms… and I like firearms, double the hate toward you.
So my internet readers and friends please don’t be a Fanboy!
To stop this menace, we must define Fanboy(/girl)dom for the purposes of this article. Also

I will be using the term Fanboy exclusively because, to the credit of the ladies, even with their smaller but rapidly expanding overall portion of the gun market at present, I have not encountered a single woman of any shooting experience level who fit the term. It has been exclusive to men thus far.

So… A Fanboy, is a term that has emerged prominently in the internet age to describe someone who likes something at an borderline irrational level. It’s most common in the entertainment world, honestly the place it belongs and thrives. The Fanboy crowds flock to conventions and events surrounding their favorite movies and TV series. They enjoy watching the shows religiously, love interacting with cast, crew, set stuff etc. The SciFi or Science Fiction and Epic Fantasy parts of entertainment also seem to contain the most boisterous of the Fanboy crowd. Not creepy stalker level (usually), but dedicated.
Thus terms like Trekkie or Browncoat (Firefly, good show, admitted Fanboy of that one right here at this keyboard)

So in entertainment the Fanboy is at home. Fiction is their paradise. Where we run into the snag is when we start becoming enamored with a factual real world product at a borderline irrational level… you know… like a gun

Ladies and gentlemen I present to you… that guy!

Yes that guy at or behind the gun store counter, or on a forum or other webpage, who just won’t let you say no to their favorite gun. This is where they start attributing mythical prowess to their chosen piece of trigger time goodness.
That guy who says that the Glock can fall 5 stories, get hit by a bus on the way down, ricochet off the bus into a sewer system, stay in the sewer 40 days and 40 nights, and emerge into the hand of man or woman in their time of greatest need and deliver an unmatched in devastation and flawless reliability level of defensive firepower that would make Mjolnir weep in jealousy.

For those of you who know what Mjolnir is without Google, I commend you, but anyway.
That same guy, when you ask to see something else in the case, will take you to another Glock. You actually have to have the presence of mind to point out something other than a Glock in order to see it, and he will still offer the nearest Glock to whatever it is you pointed at first as if to say “you meant this one right, ‘cause ya know that’s the Glock.”
A Glock Fanboy was just my most recent encounter, mildly exaggerated above but more accurate than should be, especially from an individual who is (or should be) a knowledgeable professional.

And don’t get me started on SIG or H&K.

Gun Fanboys will not hear an argument against their product. It’s always a fluke, or ‘operator error’. This is that borderline irrational stuff. Fanboys use things that do happen on occasion, to justify every possible error that someone brings up about their favorite gun, they lose sight of the fact that a gun is a machine that can and does get built wrong on occasion. That magazines can be out of spec, sights off, slide not finished right, etc. Literally every part on any gun can be made improperly and in some instances keeps being made improperly. It happens and it gets fixed if the company wants to compete in the market. Go capitalism, bringing us better guns!

In short folks, you’re guns aren’t legendary, neither are mine. They’re machines. I seek out guns with high standards of performance and quality and will encourage you to do so as well. Brand name is meaningless if the gun in your hand doesn’t perform up to the exacting standards you want. On the same token we can’t expect physical impossibilities of a machine that is a hand held little package of fun based on the laws of physics.

I am a fan of quality guns. If it works, good enough for me.
I am not a Fanboy. (Except for Firefly… Maybe Burn Notice too)
So, what have been your Fanboy run in experiences? Has anyone encountered the, so far, elusive Fangirl? Anymore insanely awesome shows I should check out?