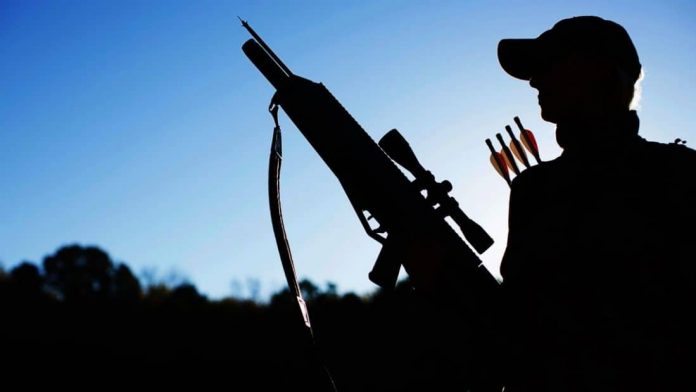 In the words of expert guide and world renowned hunter Jim Shockey, “This changes everything.” Since eyeballing and test-firing Crosman’s Benjamin Pioneer Airbow at the 2016 Archery Trade Association show and spending quality range time with it at the 2016 SHOT Show, Shockey’s words have replayed too many times to count.

Say it to yourself then take a good, hard look at Crosman’s ultimate outdoor game-changer, the Airbow.

A bit Frankenstein-ish as product development goes, the Benjamin Pioneer Airbow delivers a solid mix of archery and airgun technology, but looks a heck of a lot cooler than Frankenstein ever did. While the hybrid design looks cool on the face of it, it’s important to note the history from which the Airbow derives.

While Merriam-Webster defines archery as “the sport or skill of shooting with a bow and arrow” and adds that a bow is simply “a weapon used for shooting arrows and usually made of a strip of wood bent by a cord connecting the two ends,” virtually everyone even remotely familiar with the subject would agree that there is more to both definitions than the iconic dictionary cares to convey.

From Stone Age to New Age

From Stone Age to New Age, humans have used archery for sustenance and warfare for as long as 50,000 years; the true date of its inception remains hotly debated, but nobody contests its abundant use by the close of the Upper Paleolithic Era some 10,000 years ago. Most experts agree that the crossbow, perhaps a better analogy to the Airbow, didn’t make an appearance until approximately 600 B.C. But by about 400 B.C., the crossbow had become a pretty a common weapon in China. Not long after, crossbows trickled across the rest of Asia and Europe and used in Medieval warfare before crossing over some 400 years ago into the New World.

Air rifles are not nearly as old; however, their history seems nearly as rich. According to airgun expert Richard Beeman, the Royal Danish Arsenal houses the oldest air rifle on record — a spring-loaded, propulsive blast rifle believed to have been built around 1590. In 1600, the earliest known pneumatic air rifle (the technology is still in use today) was built for France’s King Henry IV. To power this rifle, an air chamber in the buttstock was filled, as today’s rifles are. But while earlier rifles were filled to as much as 1,000 psi, today’s Crosman pre-charged pneumatic (PCP) air rifles — and indeed the PCP-powered Airbow — take up 3,000 psi for repeat shots and increased energy.

So what happens when you marry these two technologies? It’s not a bow, or even a crossbow. It’s not a rifle or even an air rifle.

What’s the Buzz About?

Don’t let the name fool you. As Crosman’s Chip Hunnicutt was quick to point out, the Airbow is not an archery bow or even a crossbow. It was never intended to be or even necessarily replace today’s traditional archery-based equipment. Hunnicutt claims that the Airbow is in a class of its own and delivers more than enough power for big game hunting. But what makes this thing cool, different and fun?

First things first, the Benjamin Pioneer Airbow is lightweight. At just seven pounds, it’s actually lighter than many rifles or crossbows. Also, the bows are finished in black and come with Realtree camouflage adhesive decals for hunters.

The Benjamin Pioneer Airbow is a PCP-powered shooting system with an air reservoir housed within the chassis. The reservoir holds up to 3,000 psi and powers as many as 10 arrows at a blistering average speed of 450 fps.

While you could potentially charge the Airbow with something similar to a bicycle pump, most PCP air rifle shooters, and most likely future Airbow shooters will charge the reservoir with a relatively light 15-inch, 4,500psi Benjamin air tank, or even a full-fledged SCUBA tank. Either way, great care should be taken to fill the reservoir slowly when using air tanks of any kind. An air gauge sits at the tip of the forend, under the air tube for easy observation between shots or during air charges.

Although the short, “bullpup” style tactical chassis does not feature an adjustable stock it appears to hit that sweet spot, fitting shooters large or small exceptionally well. The chassis also features a surprisingly comfortable pistol grip, trigger guard and forend. Overall length of the Airbow is a short 33.5 inches — perfect for hunting and shooting in tight spots and even bloodtracking through the thick stuff without catching on brush and branches.

In Focus on Trigger Time

At SHOT’s Industry Day at the Range, I quietly waited my turn while watching shooter after shooter square up behind the Airbow and launch arrows, accurately, at an average velocity I had never seen before. When my turn came, like the others, I listened to Chip carefully as he laid out all of the Airbow’s features then slowly and clearly instructed me, step by step. I “nocked” an arrow by sliding it over the length of the air tube. To cock the Airbow, I pulled up on the ambidextrous cocking device built into the top of the stock; it was quite easy, perhaps no more than a two-finger pull.

Once the Airbow was cocked, I settled in, like the others before me, and set the MTAG crosshairs of the 6x40mm CenterPointe scope on one of the diamonds on the face of the BIGshot Extreme 500 target downrange. Once I was ready I pushed forward on the safety lever positioned directly in front of the Airbow’s trigger. After taking the Airbow off safe, I slowly squeezed the trigger. While it was a tad on the heavy side, it was crisp and with less travel than I expected.

The shot was much quieter than expected. While I did not measure how much noise a shot generates, I saw no need, myself, for hearing protection. The sound level seemed comparable to shooting a .22-cal. pellet rifle.  While the air tube did shudder after shots, it did not appear to have an effect on arrow flight. It was smooth, without any evidence of tailing — in fact, every shot I took was also exceptionally accurate and I grouped extraordinarily well, of course, the integrated pressure regulator facilitates this level of accuracy by distributing airflow evenly through the recommended number of shots per charge.

As a hardcore bowhunter, former archery technician and rifle hunter, my concerns rest in accuracy and energy, precisely where the Benjamin Airbow shines. I shot repeatedly and watched as every 375gr arrow drove hard into the target face with devastating force with 160 ft.-lbs. of energy. That’s more than enough energy to put down any animal on any continent and keep it there. Shockey proved this claim when he took a hefty bull buffalo with the Pioneer Airbow during field testing in 2015.

To say this hybrid shooting system is deadly is an understatement. Crosman knows airgun technology as well as anybody but to add archery to the mix was not only bold, it was downright genius. I suspect most people will readily embrace the Airbow for what it is: a true hybrid. With the difficulty of pulling back a compound bow keeping many from the sport, and some even having issues cocking a crossbow, the Airbow fits right in that sweet spot for people who want to get into archery and bowhunting but might have problems with conventional equipment.

More Than an Airbow, It’s a Kit Ready to Kill

The Crosman Benjamin Pioneer Airbow includes (3) 375gr carbon arrows with nano ceramic Victory ICE coating, a quick-detach quiver, custom sling, CenterPointe 6x40mm scope with MTAG reticle featuring indexing points out to 75 yds. and a canted picatinny base with 20 MOA of adjustability. And, unlike most crossbows, the Airbow can be decocked as easily as it was cocked for ultra-safe handling, especially when hunting from a treestand.

So where might one chase deer, hogs or other critters with an Airbow? Visit Crosman’s website to learn about where you can use the Airbow to hunt predators, pigs and big game. As of today, Airbow hunting for coyotes and predators is legal in 28 states, while feral hog hunting with the Airbow is legal in at least 10 states.

All things considered, Crosman’s Benjamin Pioneer Airbow is right on target. Shooting was quiet, comfortable, accurate and repeatable. While many bows, rifles and crossbows come without accessories, this Airbow essentially comes ready for action. Does it change everything? For a lot of customers, it will. And if your customers enjoy shooting rifles, crossbows and bows — and are welcome to game-changing innovation — they’re going to love the Pioneer Airbow.