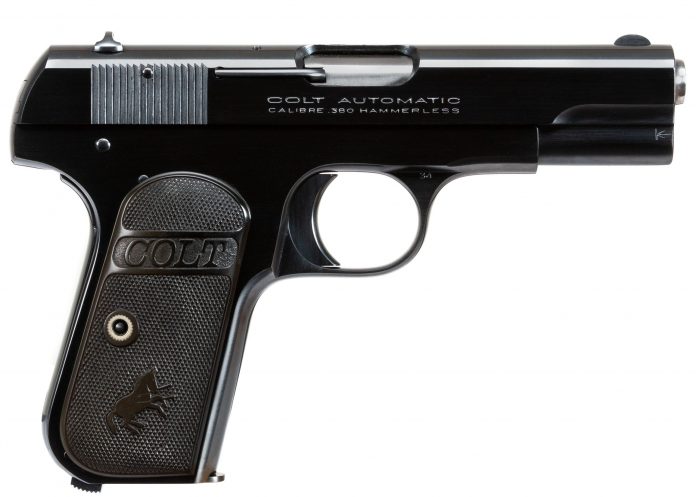 When I say duty pistol, you probably picture something like the 1911, the Glock 17, or the Beretta 92 series. You likely don’t picture the Colt M1903 or M1908 Pocket Hammerless pistols. However, you might be surprised how often these handguns popped up as a duty pistols. Why are these odd choices for a duty pistol?

First is the calibers. The Colt M1903 is a .32 ACP pistol, and the M1908 is a .380 ACP. These two calibers are most commonly known for their role in pocket pistols. Speaking of pockets, the name Pocket Hammerless is also a good clue as to what the pistol was intended for. Browning designed the pistols to be low profile and easy to carry concealed, not as duty pistols. Although it’s not truly hammerless, the Colts feature a shrouded hammer.

At the end of the day, John Browning didn’t design the M1903 and M1908 with the intention of them becoming duty pistols, but here we are. Let’s look at five times the Pocket Hammerless guns served as duty pistols.

The Office Of Strategic Services is the predecessor to the CIA, and in WW2, were the spymasters opposing the Axis powers. The agents of the OSS operated quietly, and they made good use of the concealable nature of the Colt M1903 pistols.

It bears mentioning that .32 ACP was popular in Europe, and that made it easy for resupply and caliber logistics with other intelligence agencies. OSS-marked M1903s have become quite collectible these days. The little guns were likely easy to carry in plain clothes and were probably often tucked into pockets and vests with ease.

The NYPD was forward-thinking in the early 1900s. While the majority of the officers carried Colt .32 revolvers, the NYPD issued detectives M1903 and M1908 pistols. These lightweight pistols gave their officers a fair bit of firepower for the early 1900s. The detectives were likely better armed than the average beat cop.

These Pocket Hammerless guns held more rounds than the standard revolver, and the M1908 version in .380 ACP outperformed the little .32 Colt revolvers. To teach NYPD detectives how to shoot the city of New York, hired Olympic Gold Medalist Alfred Lane.

Your standard General must be too fragile to carry an actual fighting pistol. That’s the joke I like to make anyway. General Officer’s pistols are typically much smaller and lighter than the standard issue handgun. The Army issued the M1903 and M1908 to General Officers, often their name and rank denoted on the guns.

Patton, Eisenhower, Marshall, and many more carried these pistols. Surprisingly the Colt Pocket Hammerless models remained in armories until the 1970s when they were eventually replaced by the M15 General Officers pistol.

In the late 1930s, Japanese Officers were expected to provide their own handguns, and a popular choice for Japanese Officers was the M1903 Colt. Much like Europe, the Japanese stuck to smaller calibers for their duty pistols. These little M1903s were quite popular with Officers, and they were even fairly common with Japanese police forces.

In the book Shots Fired in Anger, LtCol John George says that “All kinds and calibers of foreign handguns were carried by members of the Japanese forces on Guadalcanal, the most popular being the .32 Colt Automatic, the 30 and 9mm Luger, and the 7.65 mm Browning.”

The Shanghai International Settlement was one of the most dangerous cities in the world. The SMP pioneered modern police work in a number of ways. This includes their gunfighting skills. Men like Fairbairn and Sykes pioneered combative shooting, and they did it with Colt Model 1908 Pocket Hammerless guns.

Their gunfighting skills were developed with the world’s first shoot house, modern move-and-shoot techniques, and even an early version of point shooting. Honestly, after shooting one of these guns, I get why they did point-shooting. The sights are so freaking small they are nearly impossible to use. The SMP was quite forward-thinking, and it shows by choosing an automatic over a revolver.

The Pocket Hammerless guns might never have been designed to be duty guns, but they most certainly served well in that role. Colt’s little guns are sleek and slim and are admittedly excellent shooters. I can certainly see why they were so beloved for so long.