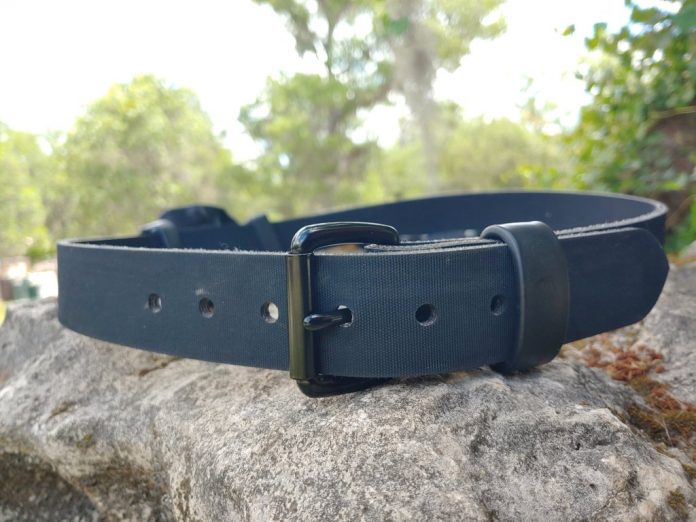 While I mostly covered guns at SHOT 2019 I also went to see some of my favorite companies in the tactical gear sector. One being Propper. I love Propper gear and since 2014 they have been my issue work pants as well. One of the coolest new pieces of gear was the carbon carry belt. The carbon carry belt is a gun belt designed for daily wear and more for the concealed carrier than the police officer. The Carbon Carry belt is made from conveyor belt material and is as close to indestructible as possible. The Carbon Carry belt looks like a black leather belt from a distance, but once it’s up close and personal you can see the difference.

The Carbon Carry belt looks sleek and professional. It can work with most style of dress and is pretty low profile in design. The Carbon Carry belt is quite thick and you feel how strong it is. The use of conveyor belt material is something we have never seen before. It does result in a belt that is nearly indestructible and unaffected by most external conditions.

The Carbon Carry Belt is quite stiff and very strong. It’s 1.5 inches in width so it’ll fit most holsters. Especially if you carry a big gun.

This thick belt isn’t slick and sliding a holster and mag pouch on this belt takes a little effort. You have to force it on the belt but once it’s in place it’s not moving. The Carbon Carry Belt is also a little tough to slide in and out of your belt loops. It’s tough, but not impossible. Again, once it’s on the belt loops it isn’t moving a hair. The belt stays in place and it supports a heavy weapon well. I’ve been carrying my Poly 80, 80 Percent lower Glock,  with the belt and it supports the weapon perfectly. It ensures it remains in one place and never sags.

The Carbon Carry Belt doesn’t twist or sag when faced with a heavy weapon and it ensures everything stays comfortable during daily carry. It supports an extra heavy load with a gun, spare mag, fixed blade knife and my normal pockets full of crap.

The Carbon Carry belt uses an all metal buckle, and a simple sizing design via the same old holes and post we are all used to. It’s simple but it works. In day to day carry I’ve felt the belt offer superior performance when it comes to carrying a load. If you are packing a pocket pistol this isn’t something you’ll need, but if you go full size this belt is a fantastic way to carry a full sized gun, along with a reload, and a fixed blade.

This is the first belt I’ve ever used made of conveyor belt material and I can say it’ll be my last. That’s not because it’s a bad idea, it’s just because this belt isn’t going to wear out anytime soon. After over a month of daily use, I’m still impressed by how stiff, but comfortable the belt remains.