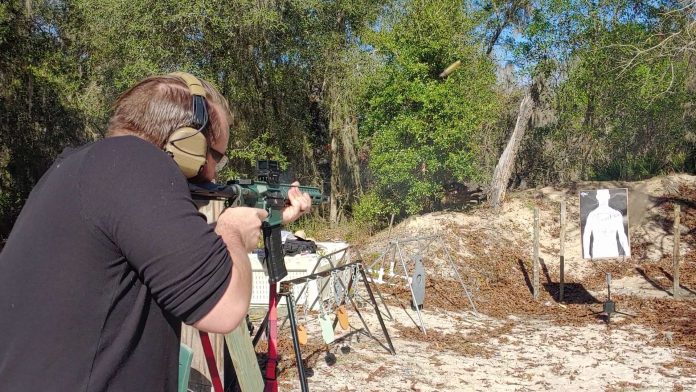 You ever get bored of shooting the same targets? I mean, we have paper targets, steel targets, and of course, a variety of steel and polymer reactive targets. Variety is the spice of life, and sometimes you want to change things up. Well, the Caldwell Target Turner promises to change things up a bit, and as the name implies, it turns target. The Target Turner spins your target 90 degrees and allows for a homemade reactive target.

So far, it’s been my favorite Christmas gift. Well, it’s tied with my Sodastream, to be fair. I’ve been pumping lead into this thing since the day after Christmas, and it’s become a tool I often take to the range.

Setting Up the Caldwell Target Turner

The Target Turner is super simple to assemble. You attach some folding legs and then insert the axle, two target holding rods, and a folding cardboard backer. The Target Turner takes 8 AA batteries, and according to Caldwell, the battery life is 8 hours.

Best yet, the Target Turner costs about a hundred bucks. All the other previous target moving devices typically cost hundreds of dollars. For about 99 bucks, you can turn any target into a moving target.

The axle holds two rods in which you can attach a target backer to. The included target backer works well, but obviously, it will wear out, right? Well, you can swap it with any typical target backer. This includes a simple piece of cardboard. Once the target and target backer is installed, you turn the Target Turner on and go! 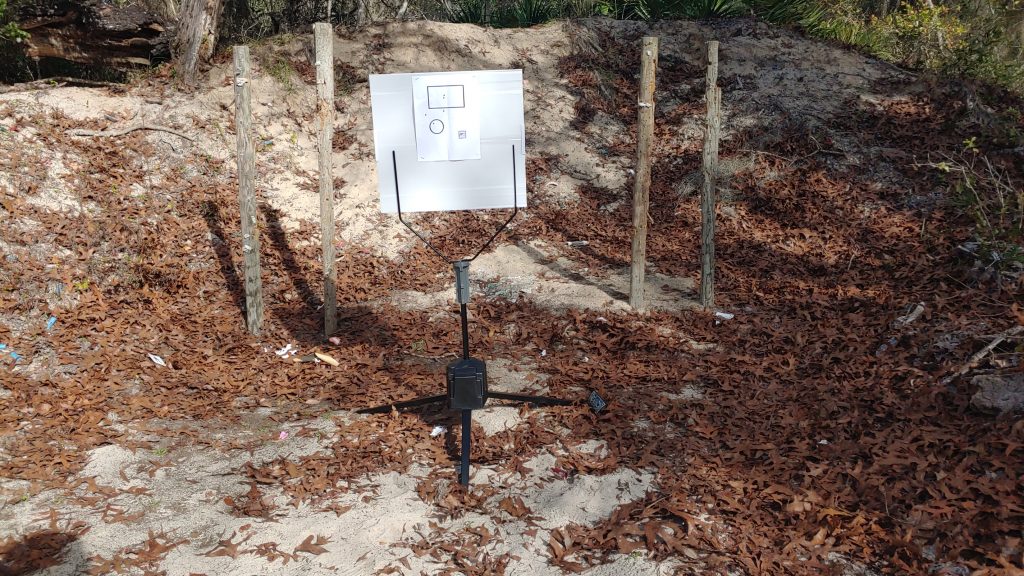 What About Different Targets?

The target backer that comes with the Target Turner is rather tiny, right? What if I wanted to use full-sized targets? Like the VTAC targets, USPSA targets, etc.? Well, you aren’t limited to the basic backer. You can use a larger cardboard backer. 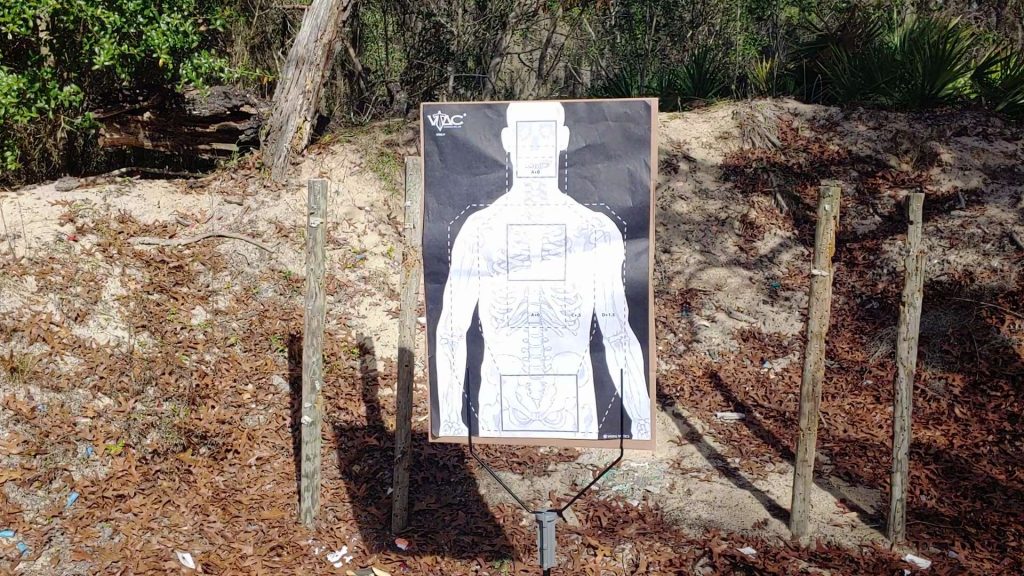 I did just that, and the Target Turner had no problems spinning the larger piece of cardboard. Even though it was slightly windy, we didn’t have issues with the target blowing over, even with the massive sail-like piece of cardboard. The low center of gravity and massive legs keep the wind from blowing it down. The cardboard will break long before the target falls over.

I’ve been using the Target Turner for a variety of different training. This includes rifle, shotgun, and pistol training. I was quite cautious with my shotgun training. I was not too fond of the idea of an errant pellet hitting the unit. Luckily the Turner base sits pretty dang low and out of your firing range. I wouldn’t zero a target on the Target Turner. You’d have to suck pretty hard to miss that low at most ranges with a properly zeroed weapon. 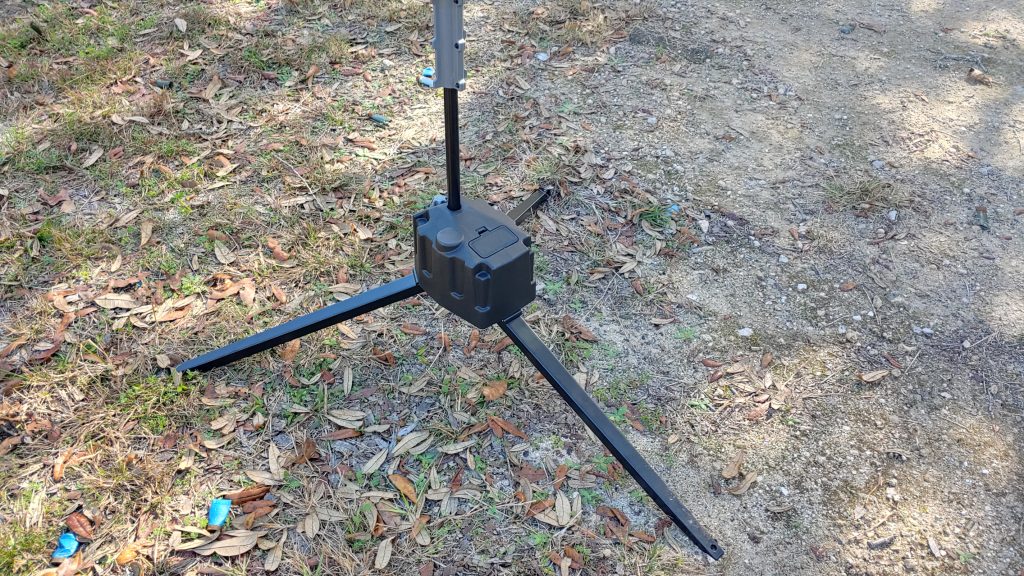 The turning design of the target gives you a new medium to react to. With a timer, we react audibly. With the Target Turner, you’re reacting visually. It’s surprising how used to a beep you can get. I can normally score a subsecond snapshot on a timer, but the visual difference stalled me a few times, and I hit over a second my first few times.

From there, I used the VTAC target to land my shots and rang a number of drills. Some classics like the Failure to Stop, the controlled pair, and reloads. Reloads were fun. I started the reload when before the target turned and needed to have the gun up and firing before he completed the turn. Same with drawing from concealment and engaging.

As I got fast, I increased the speed and had a lot of fun trying to beat the Target Turner. 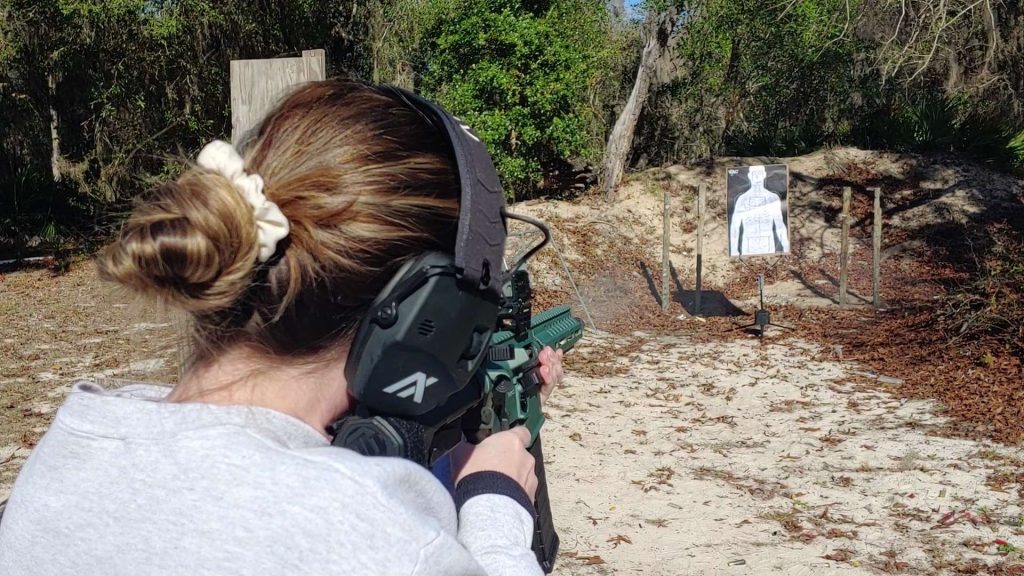 From A Beginner’s Perspective

I took my lovely wife to the range today. She’s had the hankering to tune up her skills, so we hit the range with a carbine and handgun and did a little training. I saw it as a fantastic way to implement the Target Turner. She saw it that way, too, eventually. At first, she had an ‘Oh crap’ moment and stalled.

I think that stall was valuable as it got her mind and body moving together on the next turn. She also had a limited engagement time. Like a moving par time almost. By the time we left, she was landing three shots before the target turned back with the speed cranked up. Not bad, and her reactions became flawless and quick.

The Caldwell Target Turner has a very modest price for its performance. It turned out to be an excellent and capable gift. I’ve used it for various training tasks, including dry fire, air guns, and with the Mantis Blackbeard. All in all, it’s a fantastic setup that delivers.