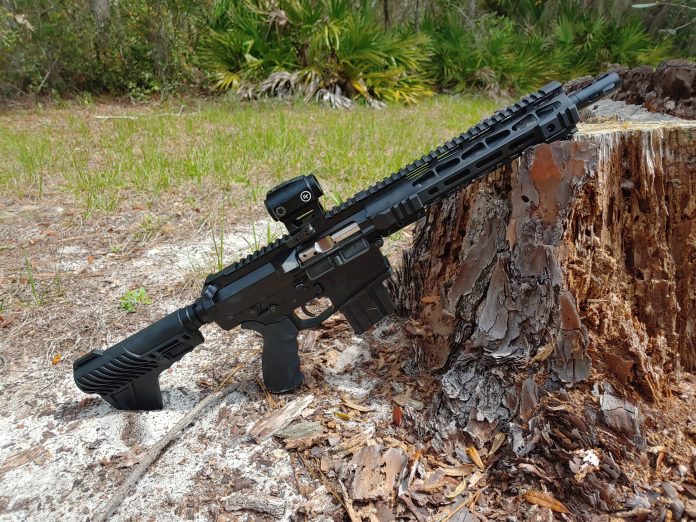 “Holy crap, it’s ridiculous, and I love it.” That was my first reaction to the Big Horn Armory AR500′ pistol.’ Pistol is an AR pistol or a large format braced pistol. When I say AR500, most people picture steel body armor. That’s not the case today. The Big Horn Armory AR500 is a line of pistols and rifles that chamber the proprietary 500 Auto Max round.

The AR500 takes the AR and makes it a larger frame weapon, and I don’t mean a large frame like AR 10. Think bigger. The 500 Auto Max comes from the 500 S&W Magnum cartridge. The rim has been removed, and it’s been optimized for feeding in a semi-automatic rifle. A gun built to handle that cartridge can’t be a lightweight little Armalite. 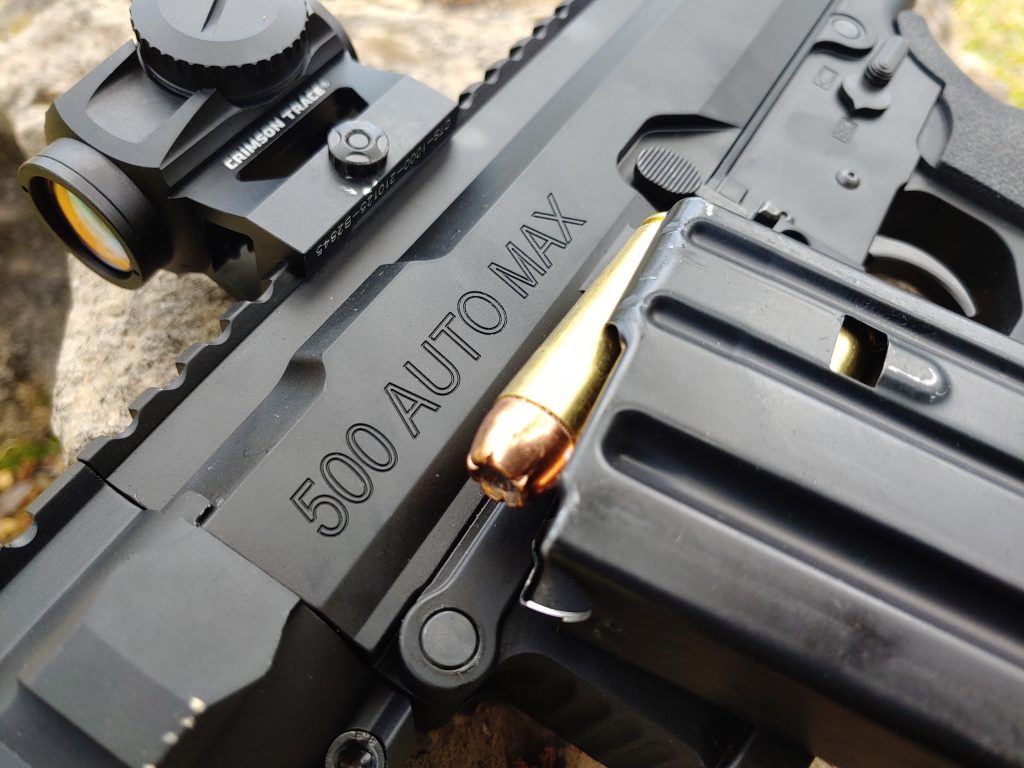 Instead, we get an 8.1 pound AR pistol with a 10-inch barrel that can hold anywhere from five to nine of these half-inch pills. It’s massive, meaty, and absolutely a beast of a gun. The 500 Auto Max takes advantage of the same projectile versatility as the 500 S&W Magnum cartridge, so the gun can be loaded for basically anything. You can hunt deer and hogs, and also Transformers. You know, everything.

The AR500 – A Monstrous Weapon

Everything about this gun is beefy. It’s huge all the way around. The nine-round magazine is massive and is roughly the same length as a AR 15 20-round magazine. Big Horn Armory installed a large, ambidextrous safety, a beefy magazine release, and an ambidextrous bolt lock to make the weapon fairly ergonomic. 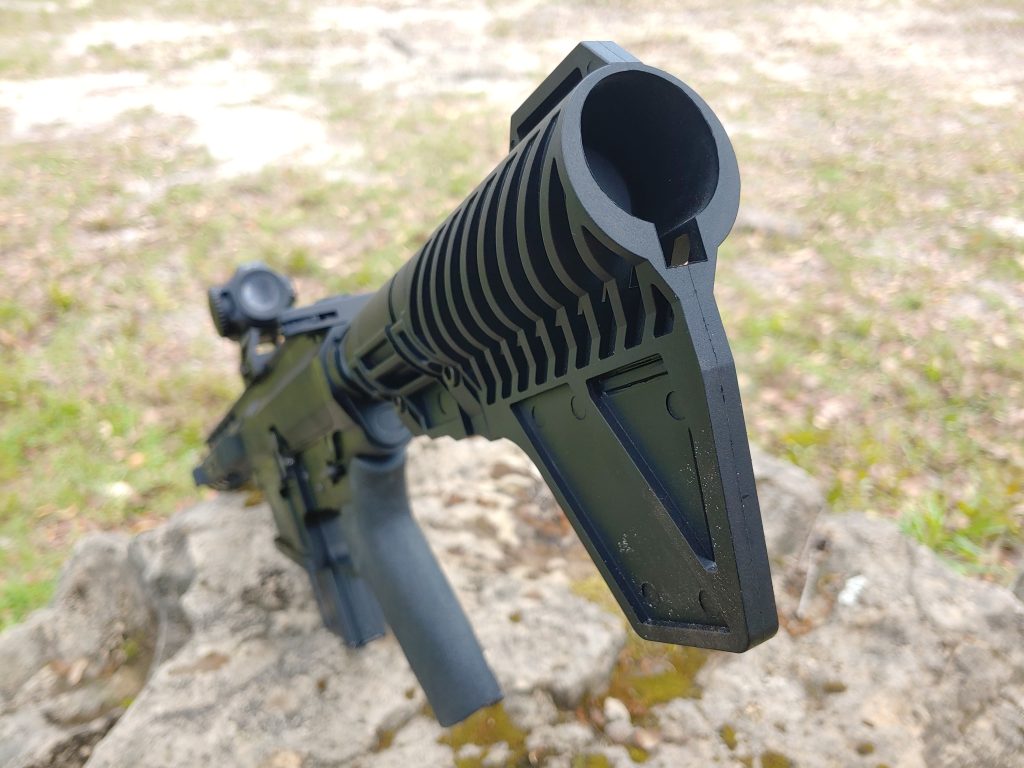 The M-LOK handguard is modern and feels somewhat lightweight. I’d imagine they attempted to cut some weight when possible, and the M-LOK handguard is one way to go about that. It’s trim, slim, looks good, and provides plenty of mounting options. The brace is where we get into some interesting territory. It’s a blade-style brace on a weapon that essentially shoots a 500 S&W Magnum round. 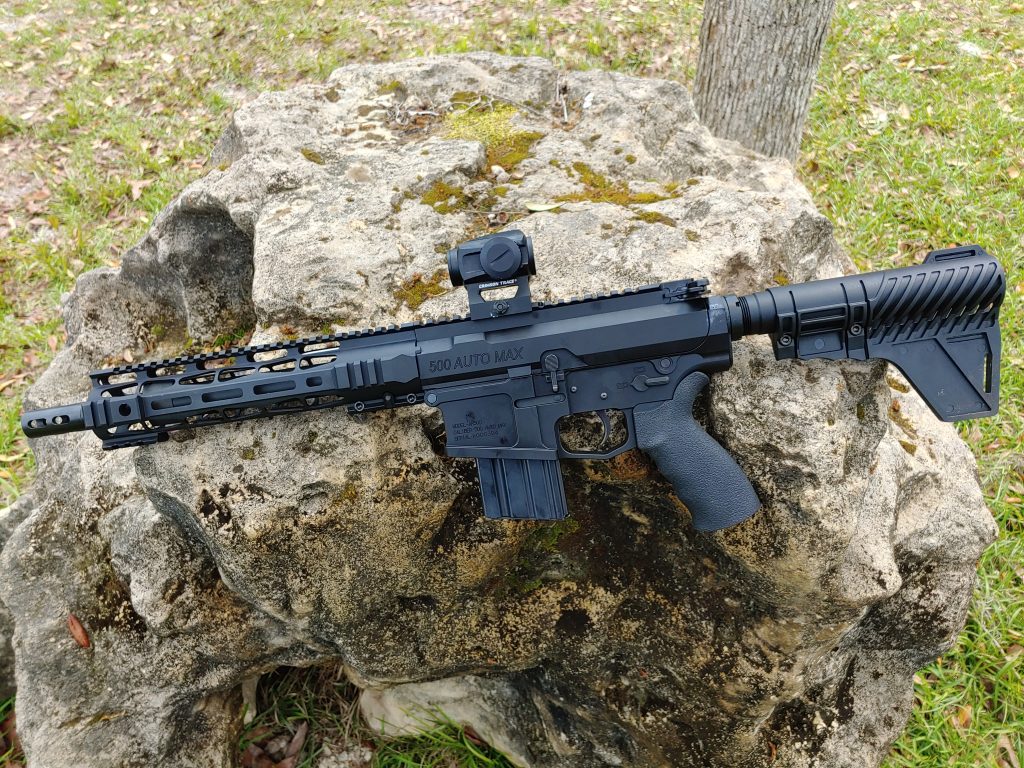 That’s not the best brace for the gun by far. At the tip of the barrel, we get a chunky muzzle brake to help tame the beast. Our BCG is ridiculous and massive, and I imagine it has to be. About the only thing small and non-beefy is the charging handle and pistol grip.

The 500 Auto Max is a brutal round that can use a multitude of projectile weights. A 350-grain projectile hits with over 2,000-foot-pounds of energy within 100 yards. Like most straight-walled, big bore cartridges, this isn’t a long-range round. It’s designed for hunting within a couple of hundred yards at most. 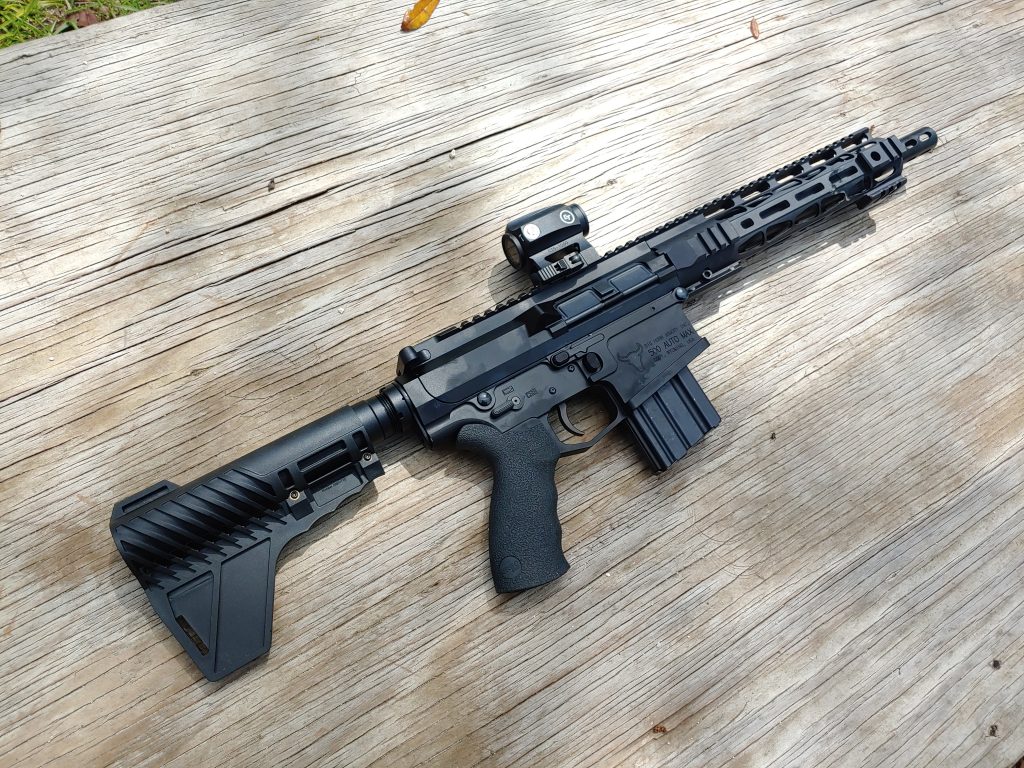 That kind of power and energy allows the round to rip and tear like Doom guy through demons. In fact, this might be the perfect gun for the Doom guy. He’d certainly had no problems sending demons back to hell with the AR500.

Ammo can be hand loaded, and I’m betting most owners of the AR500 will take that route. However, if you want commercial ammo, you can go through Steinel, Buffalo Bore, and Underwood.

At the Range With the AR500

Do you know how the ATF is trying to do this whole turn brace-equipped guns into SBRs? Well, I’d love to see the ATF call the AR500 AR pistol an SBR because of the brace. That blade-type brace is insanely uncomfortable to set against the shoulder. It absorbs zero recoil, and that thin brace type ensures you feel every little bit of it. Expect a nice bruise if you plan to use the brace improperly.

I’m not recoil sensitive, and I enjoy the recoil, muzzle rise, and challenges these guns produce. The AR500 just happens to be a bit more painful than most, though, and isn’t a gun I fire long strings. Heck, I wouldn’t fire a failure to stop drill for time by any means. That being said, a little recoil and some muzzle rise won’t stop you from a fast follow-up shot. 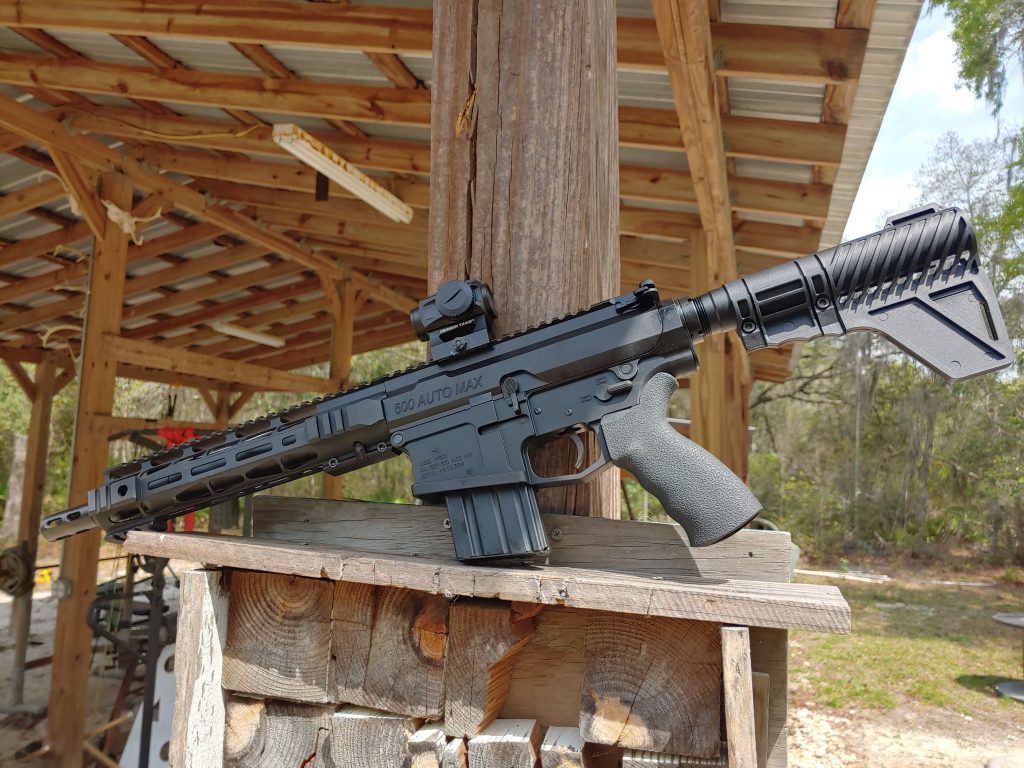 The trigger is fantastic and it takes AR 15 lower parts kits so you can upgrade the trigger if you choose. It’s very smooth with a little heft too, but it won’t stop you from shooting accurately. I could land shots into a 6-inch gong easily enough from the standing at 100 yards with a red dot. Although, after every shot, I had to go down range and unwrap the gong’s chains from the beam.

That’s accurate enough for hunting purposes. In terms of pure accuracy, most groups fell between 1.5 MOA and 1.75 MOA. Not bad, and that’s to be expected from what’s essentially a giant revolver round. 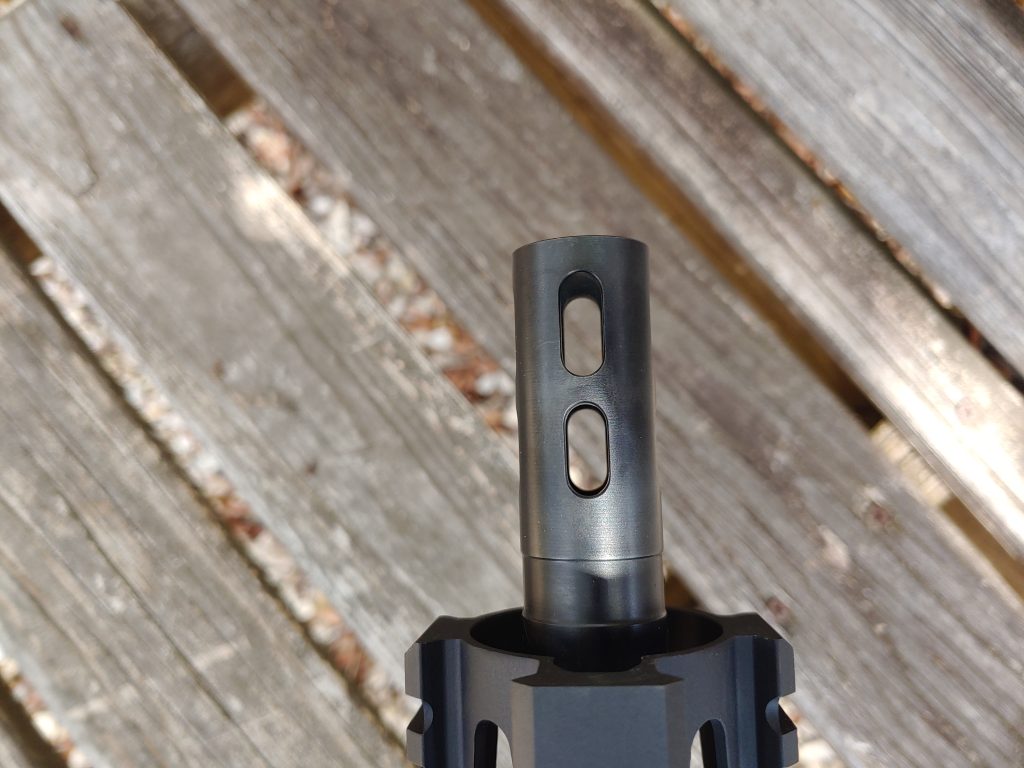 Ammo is pricey, so I couldn’t do a hardcore burndown for reliability. Nor does my shoulder want to. However, in the testing of 100 rounds, the gun never failed in any way. It functioned flawlessly. The five and nine-round mags worked great, and they kept the weapon fed. 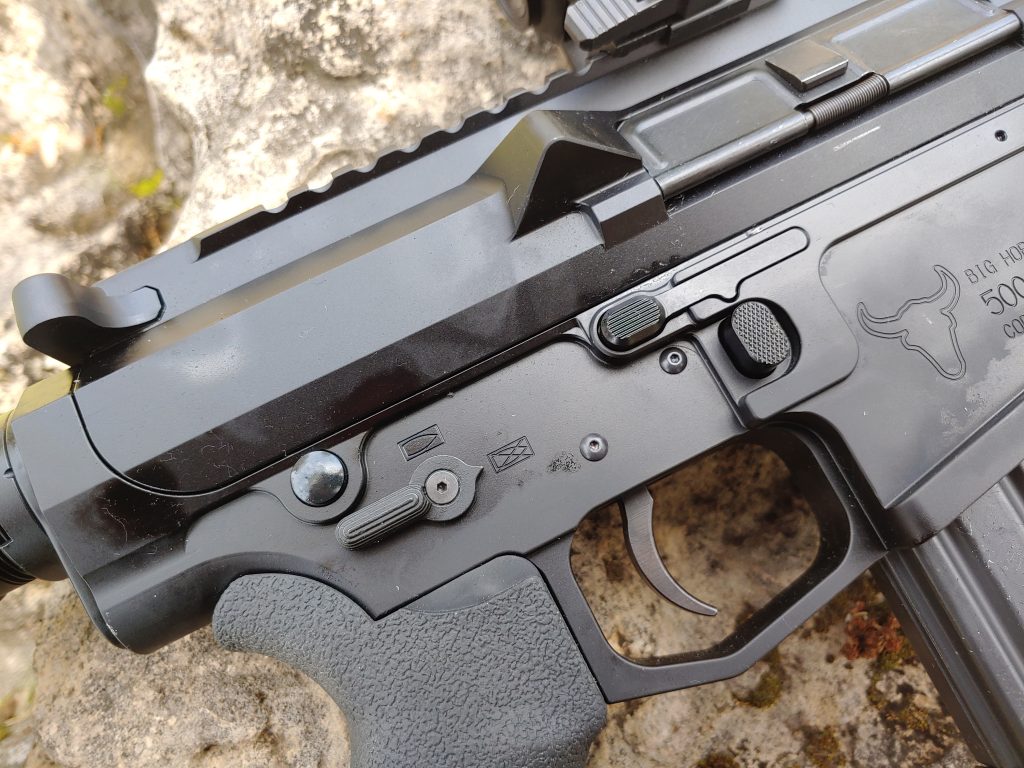 Big Horn Armory makes a number of firearms, and they all focus on 50 caliber platforms. This includes some beautiful lever guns and, of course, both an AR rifle and AR pistol. They can hook you up with the 50 cal AR of your dreams, mags, and more. It’s a small shop, but they do a number of custom options too. Check ’em out here.