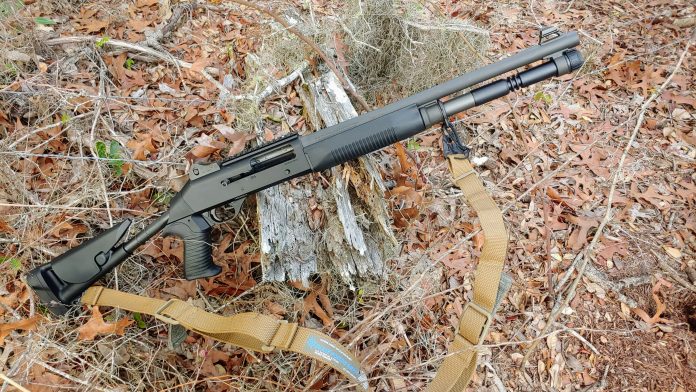 I’m not a snob about guns, and while I make a few ‘Poors’ jokes here and there I don’t mean it. However, after many years of wanting and waiting I finally pulled the trigger and bought one of my dream guns, the Benelli M4. I had fired the Benelli M4 just a bit in the Marine Corps. It was just a familiarization fire, not active training, but I fell I love with the gun. The Benelli M4 was developed for the USMC and became the M1014 Joint Service shotgun.

The M4 was developed because the Marines wanted a semi-auto shotgun they could attach optics to. Specifically, they wanted the ability to attach night vision optics to the gun. These optics are typically larger and heavier than your traditional day optic. Benelli made their name on their inertia driven guns. The M4 was their first gas-operated gun and it was purpose-built. The downside to inertia guns is that when you apply weight to them they are prone to malfunction. Gas operated guns have no such problem.

The M4 utilized the ARGO system, which stands for Auto-Regulating Gas-Operated system. The ARGO system uses two pistons that directly impact the bolt to cycle the weapon. The gas is drawn from further down the barrel than most and this results in a cleaner and hotter gas. The cleaner gas means less fouling and less likely the gun is going to malfunction after hundreds or even thousands of rounds.

The ARGO and the Benelli M4

The biggest benefit to the ARGO system is the reliability it offers semiauto shotguns. The Benelli M4 set a standard that a lot of companies have only recently reached in the name of quality and reliability. When the Benelli M4 premiered 20 years ago it changed the game. It showed the effectiveness of semi-auto combat shotguns.

Gas-operated guns can be a little finicky. To illustrate my point the new Mossberg 940 JM Pro was recently bragging that it has a cleaning interval of 1,500 rounds. That’s a gun released in 2020. The Benelli M4’s ARGO system gives you that same level of performance at a minimum. In fact, it’ll go a lot longer than that and still run. 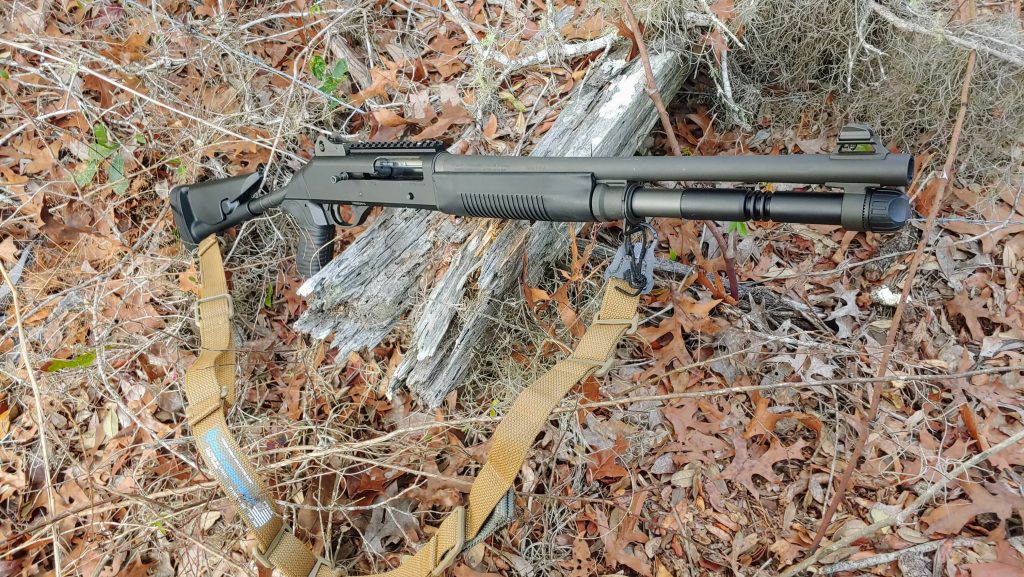 Better yet, the gun is built for military operations. This means the gun is designed to operate in the worst conditions possible. It’s meant to perform after firing hundreds or even thousands of rounds. Or after it’s been bouncing around an MRAP for convoy after convoy, or after a sand storm, or in a jungle, or wherever else duty calls.

You can say it’s built for every clime and place you can bring a gun.

Breaking down the M4

The Benelli M4 comes in a few different configurations. This includes a fixed stock with pistol grip, a fixed straight stock, and a fixed version of their collapsible stock model. The collapsible stock and 8 round tube model are available to LEO and to those willing to fulfill the 922R requirements to make it so.

Every model comes with an optic’s rail that’s perfect for any red dot you can toss on it. Additionally, the gun is equipped with a durable set of ghost ring iron sights that make the use of slugs very accurate out to 100 yards. With buckshot its quite precise and easy to get on target as well. Buckshot is a little more forgiving, but the ghost ring sights keep it precise with loads like 00 Flitecontrol.

The front sight is AR-style and quick and easy to pick up. The forend is long enough for a variety of shooters to obtain a good grip. The loading gate is nice and wide and this makes loading rounds quite easy. The ejection port is also nice and long and wide that it’s easy to do a port load with if you run the gun dry. 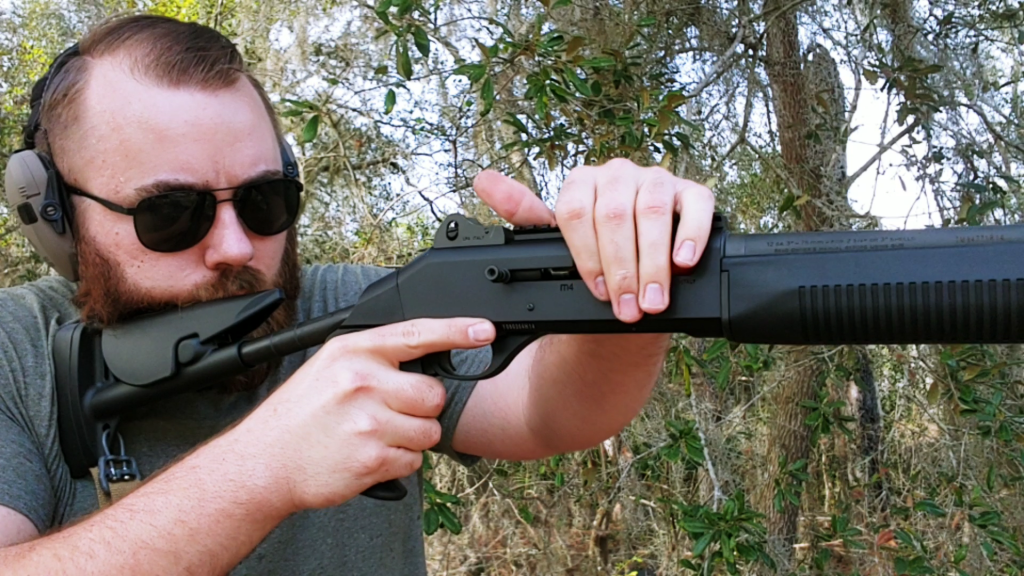 The Benelli M4 I have has the fixed faux collapsible stock and it provides an excellent cheek weld. It’s rock solid and extremely stable. You can get right behind the sights and comfortably let off your most powerful shotgun loads without the pain of a typical collapsing stock.

Pew Pew With the Benelli M4

Speaking of, shooting this thing is a dream. The ARGO system does a great job of reducing recoil and keeping the gun nice and comfortable. The gun offers a very light recoil, especially if you start blazing away rapidly. Speaking of, the gun cycles extremely fast and you can throw five rounds out before the first shell hits the ground. Well, you can once you get a little trigger time in.

With slugs I could step back to 75 yards and hit the chest of a man sized tagret. At 25 yards I was making three leaf clover patterns in a headshot target. For me the gun was nearly dead on and adjustments were minimal.

I found the LOP of the stock to be perfect. It’s 14 inches and that’s about a quarter inch shorter than most. It’s comfortable and my big arms do make this just about perfect. Smaller shooters would likely prefer a 13.5 inch LOP and I most certainly could see why.

I can drill five rounds of Flitecontrol into a chest sized target in about 3 seconds from a low ready with complete control. The scene in John Wick where Mr. Wick fires three rounds into a single target quite quickly. That scene is not just Hollywood magic, but a very capable feat with this gun. The Benelli M4 is the king of combat shotguns for a reason.

Hail to the King, Baby

This boomstick would most certainly have made quicker work of the Deadites than S-Marts top of the line 12-gauge double barrel Remington. The M4 is a rapid cycling, fast firing monster of a shotgun. It’s insanely reliable and more than accurate enough with it’s ghost ring sights available optic’s rail. The Benelli M4 is also quite expensive and that often leaves the gun to collect dust on the racks of gun stores. However, if I firmly believe the juice was worth the squeeze.