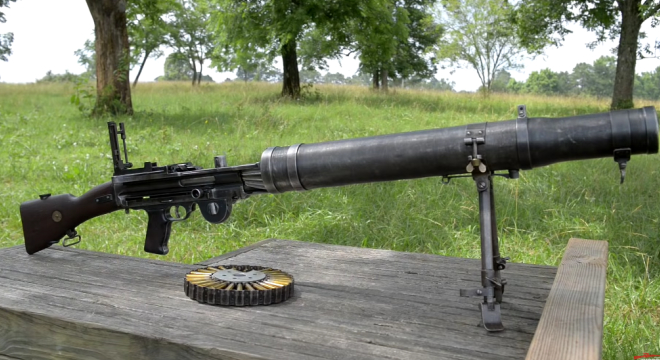 The Lewis was designed by a U.S. Army officer and initially couldn’t get any attention in the states but that didn’t stop others from falling in love.

The light machine gun was a construct of one Col.Isaac Newton Lewis in 1911. Unable to pass it on to the Army here in the U.S., he marketed the gun overseas where it was produced by BSA and others. Easily identifiable by its aluminum barrel-shroud and 47-round top-mounted pan magazine that rotates as it fires, the Germans nicknamed the Lewis “The Belgian Rattlesnake” when they heard it in action in 1914 with the Brits opposing them in Belgium.

While the USMC adopted them briefly and the Navy used some well into WWII, most Lewis guns served in the militaries of allies rather than the Colonel’s own country. And to take a look at this classic early 20th Century rattler in .303 British is Eric with IV8888, joined by a bearded guest on a road trip.