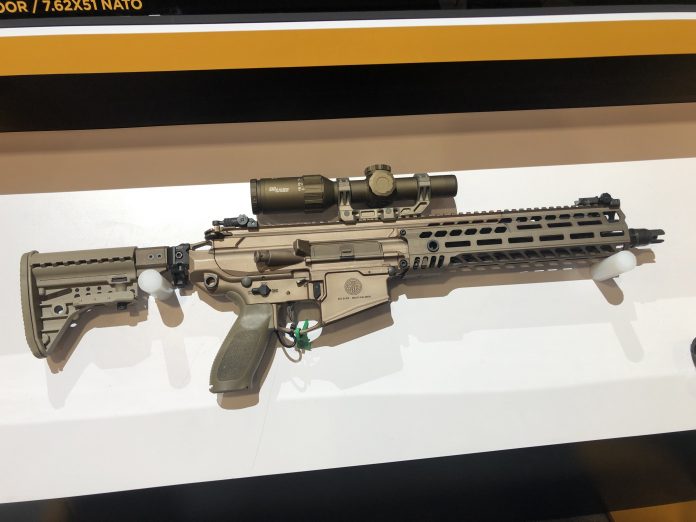 I really got all your wheels turning on this one. Excellent!

First and foremost it was brought up that, while I ragged on the military for not wanting to drop .30 caliber and the M1 Garand, and thus came the M14… the M1 Garand wasn’t originally shaping up as a 30-06 caliber rifle.

[Twenty gas-operated .276 T3E2 Garands were made and competed with T1 Pedersen rifles in early 1931. The .276 Garand was the clear winner of these trials. The .30 caliber Garand was also tested, in the form of a single T1E1, but was withdrawn with a cracked bolt on 9 October 1931. A 4 January 1932 meeting recommended adoption of the .276 caliber and production of approximately 125 T3E2s. Meanwhile, Garand redesigned his bolt and his improved T1E2 rifle was retested. The day after the successful conclusion of this test, Army Chief of Staff General Douglas MacArthur personally disapproved any caliber change, in part because there were extensive existing stocks of .30 M1 ball ammunition.[24] On 25 February 1932, Adjutant General John B. Shuman, speaking for the Secretary of War, ordered work on the rifles and ammunition in .276 caliber cease immediately and completely, and all resources be directed toward identification and correction of deficiencies in the Garand .30 caliber.]

The .276 variant of the Garand was acknowledged as the superior rifle. There was so much surplus 30-06 in US supply that, even after the ammunition broke the first 30-06 chambered Garand variant (the T1E1), all future development would be mandated for the 30-06 variant. It would eventually win and begin replacing the M1903 in 1936.

So even as far back as the 1920’s and 30’s there was plenty of evidence that the turn of the century .30 caliber rifles could be retired and a narrower profile and lighter round (roughly 6-7mm, 100-140 grain) would produce better results. We would go onto resist this idea for nearly another century.

What about lowering the mass of the 7.62 and cranking the velocity up?

This theory comes up from time to time. And a couple folks brought up that they didn’t like the AR-15 compared to the M14 so I will address that also. Yes, for any asking, I believe these individuals did use both rifles at the time in the 60’s.

Attached is a copy of the Hitch Report (1962) and a link to Loose Rounds, who covers this topic rather studiously.

In short , despite the AR’s reputation as being “maintenance intensive” the M14 requires more maintenance and at higher levels to keep running, is more expensive, and less effective deployed in a squad.

The M14 received a lot of help to win the trials (especially cold weather) over the FN FAL. Compromises kept having to be made with the design, like removing select fire capability for soldiers. The effort expended to keep them in spec and running was very high. These efforts were compounded when they tried to make the M21 and M25 work as designated marksman/semi-auto sniper rifles. They were what was on hand so they got used but they were a righteous pain to keep working and keep accurate.

Now fast and light is something Hornady did with their TAP line of ammunition for tactical CQB rifles, like the 13″ SCAR17. Several companies, development groups, and individuals (including a gentleman who wrote in with this inquiry) did as well with the .308. TAP was throwing a 110gr bullet out of a 16″ barrel at roughly 2900 FPS and indications are it will cycle gas guns efficiently.

The question: Would a fast light .30 make a good DMR round? The answer is yes, it could make a decent DMR round. Especially if you are working in range limited urban environments where you want all the effective terminal energy of your round to be inside 100 to 200 yards. After that distance, retaining that energy might become a liability.

The gentleman who asked said they (him and a friend familiar with precision rifle) used a Remington 700 as a test bed. This is a notable deviation since we aren’t talking about a bolt action rifle when we talk battle rifle and modern DMRs, we’re talking gas operated guns with barrels probably between 14.5 and 18 inches. A bolt action is likely to offer a false performance envelope for developing a DMR cartridge unless you match barrel length and twist rate to the proposed DMR platform, even then a rounds performance in the static action of the bolt gun will not indicate its reliability in a gas operated system.

Now say that we optimize the fastboi .308 in the DMR gas guns, the real answer to the real question: Would it out perform 6.5 or 6.8 at long range? is no.

We’ve seen this answer born out in distance shooting for several years now, 7.62x51mm loads do not dominate that space, 6mm and 6.5mm do.

I’m a novice when it comes to ballistic science, but the short version comes down to both ballistic coefficient and sectional density matter. When we are talking tactical rounds we need both, we need external and terminal ballistics to work in favor of the shooter’s goal. It’s less about the speed at the muzzle, more about what that speed does during the trip, and most about how much it has finishing the trip. That ‘end of trip’ at the target and how much speed is retained will determine what the round can do. Then the rounds composition (steel tipped copper), including the sectional density, assist in its effect on target. Ballistic coefficient also tells us just how much atmospherics are going to mess with our shot on the trip.

As we can see, we have impressive energy at the muzzle with our ‘fastboi .308’ and out to 300 yards we’re only looking at about 9 inches of up and down travel on the target, with a 100 yard zero. We’ve dumped half the energy by 300 yards but it still has near 7.62×39 AK energy there. At 500 yards we are at half the speed and under 1/3 muzzle energy and it just continues to bleed off after that. This round gives up it’s authority early but would still be very effective inside and beyond typical 5.56 distances.

Now, our hypothetical high velocity 6.5 round.

As you can see, we start in just about the same place muzzle energy wise, which makes sense with same speed and similar mass, however over the first 300 yards we only see 7 inches of total vertical travel with the 100 yard zero compared to the 9 inches on our fast .308.

When the 6.5 reaches 500 yards its packing the energy that the .308 did at 300 yards. This isn’t even accounting for the terminal efficiency of the sectional density differences, we’re just talking raw kinetic energy here and the 6.5 made it 60% further with the same energy on target. The .308 dropped below 1000 ft/lbs of energy by 450 yards where the 6.5 has kept that until 750 yards.

And as the final point here, the distance at which the 6.5 goes subsonic in our little equation is 1419 yards. As I noted, when the round hits subsonic it is delivering roughly 9x19mm energy onto the target. Our hypothetical high velocity .308 hit that point at 856 yards, the 6.5 made it 65.7% further before hitting that 9mm energy level.

Keep in mind that stability suffers greatly once the round comes back through the sound barrier too. When people say that 6.5 makes 1000 yards easy, they aren’t kidding. It is that much more efficient a round than 7.62 for the bullet mass.

First, the M855A1 EPR out of the M4/M4A1. The 62 grain round with the solid steel tip has a listed ballistic coefficient of .152 (G7) and produces the following numbers down range. I won’t get into the G1 vs G7 ballistic drag profiles here, that is a whole different discussion.

So far, out to 300 yards we’re doing alright with only a 10.60 inch drop from the point of aim given a 100 yard zero (LPVO/ACOG would utilize). The energy on target is much lower but we are dealing with a smaller projectile at a slower velocity than our hypothetical .308 or 6.5 were.

The M855A1 can take a shot outward to roughly 700 yards prior to hitting that subsonic transition (730 yards). The energy on target is still at 9x19mm kinetic levels at 500 yards. The .308 and 6.5 both hypothesized a greater range, but scaling up to the larger frame of the traditional battle rifle is done with much greater efficiency in the 6.5.

Finally let’s look at one more round. This one, while still a mystery, isn’t so hypothetical as the previous two. The US Army NGSW program has in their possession 3 prototype 6.8 rounds that are of unknown performance. I’ve read several theories as to their plausible stats, but nothing concrete.

The rumor: It is an extremely high pressure round designed to achieve very impressive muzzle velocities out of a shorter barrel. The recent rumors I saw that said ‘3600 fps out of a 16″ barrel at upwards of 180gr’… seem a little far fetched to me. However, with the rumored/listed chamber pressure of 80,000 PSI, a 140ish grain projectile, and the 13″ barrel of the SIG NGSW in 6.8x51mm/.277 FURY we can run some numbers.

Sig Sauer announced a 135 grain match load and a 140 grain hunting load. Since the 6.8 projectile the Army requested is secret I took a 145 grain selection from the Hornady list and gave it a muzzle velocity of 2900 fps, this will be our stand-in approximation of XM1186. The ballistic coefficient on the 6.8 is significantly higher than the M855A1, an impressive .270 (G7).

The claim is the FURY outperforms 6.5 Creedmoor, by what metrics we are not entirely sure, however SIG Sauer claims that the cartridge has performance superior to the current SOCOM M110 favorite by exhibiting 6 to 9 feet (1.8 to 2.7 m) less bullet drop at 1,000 yards while delivering 20–25% greater energy. This could very well be the case since the higher velocities will mean flatter trajectories and there won’t be as substantial a change in ballistic coefficient between the two differing diameter rounds the way that 7.62 and 6.5 exhibit.

Now what does our approximate XM1186 6.8mm do further down range?

Looking out to 1000 yards we have very good numbers on retained velocity and kinetic energy. Compared to the 5.56 it will be replacing, the 6.8 has 3.38 times the energy and 20% greater velocity at 1000 yards than the M855A1 has at 700 yards. It will, in every metric except size, be a more capable and lethal round for the military to utilize.

Now this is the realm of the purely academic. Soldiers have difficulty hitting 300 yard targets at the moment. The NGSW should, through its across the rifle system improvements, allow soldiers to extend that envelope of coverage out to 500-600 yards with a very reasonable degree of success and increased hit effectiveness on better armored targets. In theory, the new rifles should make 1000 yards “easy” and turn Army and Marine ground forces into far more dangerous combatants. In practice this will take not only the NGSW but the combined efforts to train troops on the new weapons.

If that is done then the future ground forces of the United States will be able to very efficiently fight as far as the eye can see… and then some.