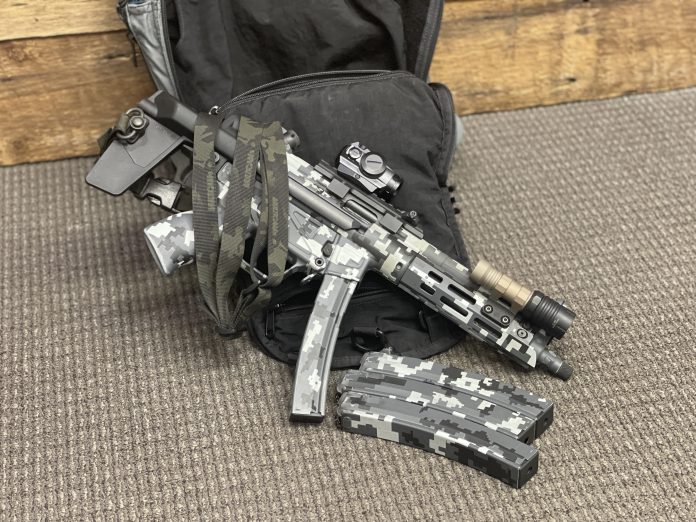 The topic came up in one of the gun groups I frequent and after the discussion I felt a post was in order. It was a good discussion.

A bag gun, or a truck gun in some parlance, is a carriable carbine of some manner in a more discreet container that doesn’t scream ‘I am a person armed with a rifle’ upon casual observation. The bags are made to look like backpacks or gym bags, and sometimes are just that, but they pass as more mundane carriables while also holding a more capable firearm than your EDC piece.

How is a Bag Gun used?

For fun and for flex.

A bag gun, in most of our lives, is a conversation piece. It is. Don’t get mad.

Outside of professional circles, like the Secret Service or low profile LE event security, a discreetly carried carbine is not particularly useful. It ends up being a bunch of effort for no practical gain. Your EDC is your emergency tool and your bag gun is not your EDC, even if it’s around you daily.

Fun, certainly, but not useful.

What the Bag Gun becomes is a way to discreetly transport, again not ‘carry’, but transport a carbine into places and spaces where you don’t want everyone and their aunt knowing you brought a long(er) gun.

On vacation, staying with friends or family, at a longer event with residency or a place you are staying, wherever you might feel it handy to have fairly quick access to a more capable firearm in case of a sudden environment level shift in your safety status.

This is typically associated with a static location you can safely keep the carbine. Even if it remains in the bag, it has a storage point that you, and perhaps others in your party, know about in case anything in the bag is needed. The bag likely contains more than just the carbine too. Medical gear, restraints, less lethals, even typical items like electronics might be compartmentalized in the bag.

You may or may not have seen a video, or reel, or TikTok of someone very quickly going from their allegedly “discreet” carry of a carbine, to the carbine out, and about, and ready to workout.

Cool for the Gram, certainly. They had fold away armor too.

The reality of these drills is more a proof of concept that a stored firearm can be prepared rapidly, not an actual ‘under time’ stressed draw for a fight. You don’t need to run Bill Drills from a bag to a set XX:XX time, you do need to run drills from the bag to make sure you can smoothly get the gun into readiness and identify snag points.

If you need to draw for a fight in progress, use your EDC. 100% of the time it will be faster, every time. Then at a safe moment prepare the carbine, if necessary.

The “quick” deployment showcases that you need little, not none, but little notice in order to ready the gun, and perhaps extra equipment with it, into an effective state because a fight, or openly detering a fight by being overtly armed, is imminently necessary and unavoidable.

If all of this is leading your thoughts down the path of ‘This sounds useful if my city breaks out in riots’, then you’ve stumbled upon the most likely use case for a non-professional user. Besides flexing that is.

Where you are at, the event or location you are attending, goes feral in a hurry and you need to get you and yours gone from this now suddenly unsafe space.

I have a few SBRs and “pistols” that can be used in the role, but I tend to default to my Zenith MP5 clone.

After shooting it with James Williamson a few years back, and discussions and shooting with Tom Alibrando, I just like it. It does the job well enough and checks the boxes I want checked.

Suboptimal? Maybe. But not in enough areas where I feel a particular need to go out and buy into a .300BLK Rattler, or a MK18 with a LAW Folder, or any other variation on the theme of compact carbine, the MP5 does the job fine.

I’ll get into why at the end.

The Sentinel Concepts Revelation 2.0 by TUFF Products does a really good job of looking far more like commuter backpack than tactical gun transport bag. It isn’t perfect, nothing is, but it is comfortable and doesn’t scream ‘Gun Within!’

Longer bags able to accommodate more rifle, even broken down upper/lower, still tend to be out of place if they’re taller, longer, heavier looking than a school bag dimensioned bag. They can get away with life as adventurer, backpacker, hiker, camper bags, but any time you step into the world with this much gun carried on your person at some point you are going to start stretching someone’s limits of credulity.

So pick your bag based on the job. Is it a permissive but discreet environment where as long as you aren’t dragging in a pelican case covered in industry stickers you’re fine, or are needing deep concealment that people are going to dismiss as a regular backpack for clothes, laptop, and other daily devices?

The interior of the Revelation 2.0 conceals the gun in the back behind nylon, so opening the bag and having a computer, hoodie, or whatever in the front pocket can easily maintain the discretion. Any longer examination inside will tell an observer, “Hey! Another pocket!” so there is that. But the interior, like the exterior, avoids being festooned with MOLLE and in OD, FDE, MCT, or Multicam whatever.

Although tactical colors and patterns have their own fashion niche that isn’t always gun guys or gals, so it isn’t as much of a tell as some might thing.

Behind the nylon sits, surprise, the MP5!

30’s fit comfortably, 20’s would probably be a little more smooth removing, I have yet to try the Magpul 50rd drum but I suspect that will work nicely as well and may become the go-to magazine.

“Why would you carry chamber empty!?

I’m not, my EDC is chambered and holstered as usual. This bag is a gun case, not a holster. I am uncasing and readying the MP5, not drawing it. One is accomplished swiftly and efficiently at need, but an immediate need will always be the EDC draw and not the gun in the bag.

The bag gun means I have a minute. How many minutes will determine what else comes out of the bag. Loading procedure on the gun is going to be the first thing after it clears the bag.

If time is short, you know that you keep the sight ready to use so

If you keep the sight off, whatever, turn it on. However with battery saver tech on current sights there is no real need to conserve power.

Light recently checked so that it will turn on when you ask it too, unlike your sight though checking your light might not be something you can do discreetly.

If you can, check it, but if not having recently checked it (and your sight) you should be ready to go.

In this instance I do not want a sling needing to be unwound or untangled, I am bring thing out because I might need it on very short notice and may not be in a position where slinging the gun brings me value.

Again, the bag isn’t a holster. That said, you should be able to go from a stored weapon to a ready weapon with one full magazine in a 30 second window, checks included.

So if, hypothetically, you’re caught on a road heading right into a riot with no better way to go but through you can also put a gun in your lap (or equivalently convenient space) that has more staying power than your comfortable P365, G19, or J-Frame.

In short, you see trouble coming fast but you still saw it coming.

You’ll notice no sling, but you will notice QD sling points.

Time gives you options (and accessories)

You (or I) now have a functioning carbine in hand. We can handle the immediate problem and start taking the next steps.

If that immediate problem is continue preparing, we can further set ourselves up to support running the gun.

The next most accessible pocket gives me more magazines. I might be in a one magazine situation, hopefully, but I also might not, so having the time to stuff my pockets or place these in a more accessible location comes next.

This leaves me with the carbine and more ammo, but still no sling.

Fix that next, add the sling.

Get to the spot where you can start putting these things back away and zipping the bag shut again.

We can just get that in right away, I want to stick with 9mm because I do. The same reason I am running an MP5 clone and not a modern MPX, I want to.

Fairly simple, I can keep 3-4 loaded MP5 magazines in the space of 2 rifle magazines. The gun is reasonably light. The gun is low recoil.

While I know there are ways to run a can, and I will probably add a can to the extra equipment list, the bag is not conducive to running a can on the gun.

So if I am pulling this thing for real because I will need it, it is getting fired unsuppressed. It may also be getting fired inside a vehicle.

If you’ve never done that, it is loud an unpleasant. It is drastically louder and more unpleasant in rifle calibers.

Here’s a bit of advice for those chasing the min/maxer angle on this whole thing.

After reminding everyone that this is mostly a flexercise because it is fun, in the event you’re using this in the actual emergency you built it up for your most drastic change in your capability to fight, protect, and otherwise project force to your advantage was by going from a handgun to a shoulder fired higher capacity weapon.

You became more accurate, with more rounds on hand, probably faster, and your physical presence as a fighting force to be reckoned with changed. You’ve changed how you’re showing up to the fight and that could help avoid the fight. Now there’s every chance in the world that riding toward that fight in an APC with an armed and armored squad wouldn’t avoid that fight, but you’ve set yourself up for the last ditch avoidance of what looks to be unavoidable as best you can.

Build out a bag gun and bag gun kit.

Just stop leaving them in your cars!