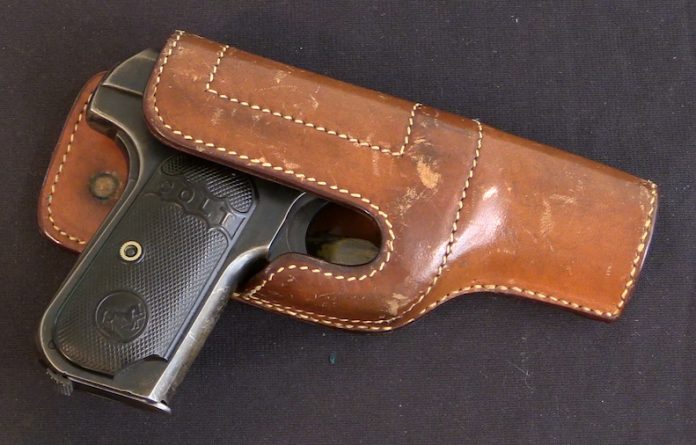 We take for granted the number of awesome holsters available these days. It’s tough not to. There is an overwhelming number of excellent holster designs. Back in the day, this wasn’t the case, but in 1914 a man named Francis Audley designed the Audley Safety Holster, which would continue to influence holsters today.

Francis Audley was a leather craftsman who traditionally worked on horse tack. As vehicles rose in prominence, Mr. Audley looked for an alternative source of income. This led him to make holsters. He made many styles of holsters, but the Audley Safety Holster was his claim to fame.

What’s So Special About the Audley Safety Holster?

The holster was innovative, and he wisely set up a shop across from the NYPD headquarters. This built-in customer base allowed his innovative design to get some wind under its sails. The Audley Safety Holster used a unique retention device. A small metal tab locked around the trigger guard and kept the weapon in the holster.

To draw, the user pressed the tab inward, and this released the pistol. Admittedly this wouldn’t quite pass muster today. However, it was 1914, and things were a little fast and loose for the time. Prior to the Audley Safety Holster, the only method of positive retention was a great big flap that covered the whole gun. This was rarely fast and hardly accessible.

The Audley Safety Holster allowed the shooter to draw a fair bit quicker while keeping active and positive retention over the weapon. A bad guy couldn’t fight the weapon away from the user, and it could essentially only be drawn by the user.

There are some glaring safety issues with this design. However, it’s worth noting that automatics were traditionally carried with an empty chamber in this time period, and the long heavy trigger of a double-action revolver was considered safe enough. It was also the first of its kind, and we didn’t have the same vein of knowledge then that we have now.

These days duty holsters that contain those features are common, the standard, really. In fact, companies like Safariland and Vista Outdoors both cite the 1914 patent of the Audley Safety Holster in their designs.

Who Used The Audley Safety Holster?

The Audley Safety Holster was designed for numerous firearms, including the 1911, full-sized revolvers, the Colt M1903/1908, Baby Brownings, and many more. Sadly Audley never got to see the success of his pistol holster. He died in 1916, and the H.D. Folsom company acquired his patents.

The holster was fairly popular, but an incident in 1922 brought in a massive amount of orders to the H.D. Folsom company. A police officer named Patrolman Motz was murdered inside a police station when a criminal took his own gun away from him. Commissioner Enright then ordered every man of the 12,000-strong NYPD to equip themselves with an Audley Safety Holster. He also opened a shooting school and encouraged the men to practice their draw with an empty gun.

The holsters also found a home with the OSS. However, it seemed like most OSS men provided their own holsters. Roger Hall, an OSS agent and Jedburgh operative carried his Colt M1903 in an Audley Safety Holster. The holsters continued their production until the 1960s or so, when they were eventually replaced with various designs.

The Audley Safety Holster changed the game for combative-oriented holsters. It was the first modern holster to feature an easily defeated retention device. While it wasn’t perfect, it did create a new genre of duty holster, and it’s one we benefit from to this day.