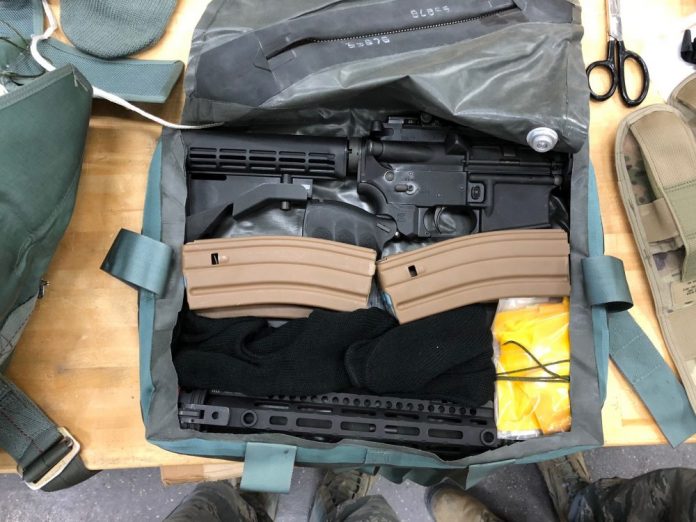 Based on the M4, the GAU-5A has a folding pistol grip and a quick-detach barrel/handguard. The guns can be quickly assembled and are packed with four, 30-round 5.56mm magazines. (Photo: U.S. Air Force)

The U.S. Air Force recently released some great images of their new GAU-5A Aircrew Self Defense Weapon in service. The rifle, first shown off last year, is designed to be packed in ejection seat bail-out kits alongside flares, a flashlight, a life raft, medical and survival modules, all intended for aircrew to use in an emergency if needed.

“We were asked to design a stand-off weapon that was capable of hitting a man-size target at 200 meters,” said Richard Shelton, Chief of the Gunsmith Shop, in an Air Force news article. “It disconnects at the upper receiver, is located inside the seat kit [of ACES 2 ejection seats], and can be put together within 30 seconds if needed.”

Weighing in at 7-pounds, the USAF has delivered about 2,700 quick-take-down Aircrew Self Defense Weapons to units between Feb. 2018 and January 2020. (Photo: USAF)

The GAU-5A must stow inside a 16 x 14 x 3.5-inch ejection seat compartment, according to a June 2018 Air Force Times report. The guns get that small due to the use of an M4 style collapsible stock, flip-up backup iron sights, an Israeli FAB Defense AGF-43S folding pistol grip, and a Cry Havoc Tactical Quick Release Barrel (QRB) kit.

Cost to develop and field the system was $2.6 million– a price of less than $1K per gun. Where do we sign up?

The GAU-5A is not the first rifle to accompany American aircrews. Going back to the 1940s, the M4 Survival Rifle and then the M6 Air Crew Survival Weapon– the latter a double-barrel break-action .410 shotgun over a .22 Hornet– were included in the bailout kits on several aircraft. Those guns, removed from service in the 1970s, are now considered museum pieces. Armalite’s AR-5, a floating semi-auto rimfire rifle that could be stowed inside its buttstock, was adopted as the M1A but never put into production, leading the company to produce it for the commercial market as the AR-7. Likewise, the M6 has also gone on to be produced commercially in various configurations. The Bushmaster Arm Pistol in 5.56mm was another planned Air Force survival gun that made it about as high as a lead balloon.

Speaking of pistols, the Air Force has also been submitting the new Sig Sauer-produced M17 pistol, which is replacing the service’s M9 Berettas and M15 S&Ws, to ejection-seat tests. “This is the first time any service has conducted this type of demonstration to ensure a sidearm is safe for aircrew to carry in ejection seat aircraft,” says the Air Force. (Photo: USAF)