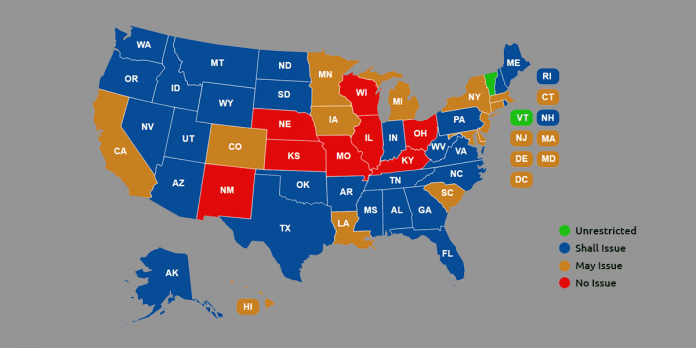 Today on the adventures of the traveling semi-professional shooter, we’re talking about actual traveling, specifically driving across state lines to attend matches. In this article we’re going to cover things like how to secure your guns legally, safety at rest/gas/overnight stops, carrying, and a few other general safety tips.​ I’ve been traveling to fly-away matches since 2010, and in that time I have learned a few handy tips and tricks. Hopefully you can stay out of trouble, keep your gear safe, and focus on the match by following these travel guidelines!

Why drive instead of fly?

T​here are a lot of considerations for how to travel to a major match. I have driven and flown to matches, and each mode of travel has its own benefits and its own drawbacks. The biggest advantage of driving is that it has the least complicated logistics of travel, since you can pack all your own gear, bring your own ammo with you, and saves the expense of a rental car at your final destination. For many people it’s the best choice, and in some cases it’s the only choice.

W​hat’s FOPA? The Firearms Owners Protection Act, and it’s what allows you, the law-abiding gun owner, to transport your firearms across state lines legally. FOPA is why, if you live in Indiana and are shooting a match in Missouri, you can drive through Illinois and stop for gas with a gun that’s not registered in IL or a FOID card and not be breaking the law. But FOPA doesn’t apply to concealed carry, and in order to be in compliance with the letter of the law, your gun needs to be locked in a secure container and out of your immediate access. The glove box does not count. The idea here is that you’re truly transporting the gun, so to be safe keep it locked up in a box in the back.

Unfortunately, FOPA has a major weakness. It won’t stop you from getting pulled over and arrested if a local cop, say in a place like New Jersey, decides they want to mess your day up. This has happened too, where people were in full compliance with the federal law and were stopped by police and arrested for violating one of the state’s gun laws. This usually happens in New York and New Jersey, who have reputations for not really giving a crap about FOPA.

T​here are ways to keep yourself from getting in trouble though, and the first should seem obvious. Don’t speed. Want to avoid having to explain to a Colorado State Trooper why you’ve got 30 round mags in your car? Don’t go 85 in a 70. I have lost track of the number of photos I’ve seen from friends on their way to classes or matches where they’ve been pulled over, because they like to get their lead foot on. I have nothing against speeding, but I would say that when you’ve got 2 competition guns and 1000 rounds of ammo in the car, maybe it’s time to set the cruise control at 78 and just chill. Iwill note that having said all of this, I do still speed. My rule of thumb though is no more than 10% over the posted speed limit, so if I’m in a 65 I’m doing 71ish, a 70 I’m doing 77 or maybe 78. My thought process on that is I’m not the fastest or slowest thing on the road, so I’m not likely to attract attention, because attention is what we want to avoid.

D​on’t make yourself a mark

N​ow that we’ve covered “not getting hemmed up” let’s talk about how to avoid making yourself a target for thieves. I have heard of cars getting broken into at gas stations, restaurant parking lots, and a bunch of other places. First things first: don’t have any gun-related stickers on your car. If I see a car with an NRA sticker and a Glock sticker in the back window, I know there’s an unsecured pistol in the glove box or center console. Don’t tell people “oh yeah there’s a gun in here” with stickers and decals! Stopping for gas and a restroom break? Park the car where you can see it from the inside of the store; and try to keep bathroom breaks as short as possible. Same if you stop for food.

I​ know this may seem a little paranoid, but be especially observant when you’re leaving the range after the match. There are documented incidents of criminals following cars leaving the gun range and then pulling a quick smash and grab on that vehicle when the driver is getting gas or stopped somewhere. While it feels weird to say “make sure you’re not being followed”, it’s also worth making sure you’re not being followed.

Last but not least, let’s talk about about actually carrying a gun. If you have a concealed carry permit, make sure you check the reciprocity laws of the various states you’ll be driving through. For example in IL, even if they don’t honor your permit, you can transit the state while carrying…so long as you don’t stop and get out of your vehicle. This isn’t legal advice, but in general make sure you’re 100% sure that your permit is good in State X before you carry your gun across its lines. Sure, you may not plan on getting stopped or needing to leave your vehicle, but sometimes bad things happen on road trips.

L​et’s put a bow on this: don’t speed, take those stickers off your truck, pay attention to your surroundings, and don’t break the law. Pretty simple, right? Hopefully this will come in handy next time you’re planning an out-of-state trip for a match or a class.