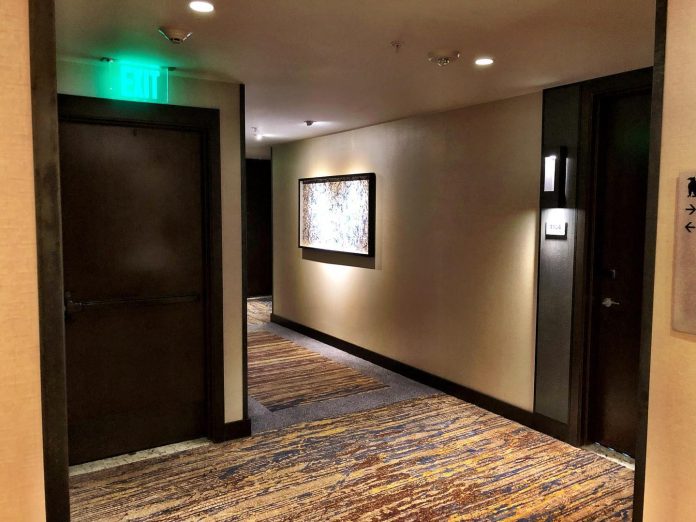 I’m Caleb Giddings, and since 2011 people have been paying me various amounts of money to travel around the country and shoot matches. This is going to be part of an ongoing series where I share stories from the road, tips about shooting matches, sponsorship advice, pretty much whatever I want as it relates to the life and world of being a traveling pro shooter. If you have ideas or questions for a future column, email them to me at gunnutsmedia@icloud.com and I’ll see if we can work them in.

Today’s column is going to be about one of my favorite topics: how to safely store a gun in your hotel room. Let’s say you’re traveling to a match and your match gun isn’t your carry gun, and you’ll leave the hotel at some point to do something other than shoot the match. Believe it or not, your hotel room is probably a safer place to store your gun than your car, since your car is not a safe and I’ve personally heard too many horror stories about people’s cars getting broken into before, during, and after matches.

Step 1: Stay in a decent hotel

Okay, we all know that competition shooters are often…aggressively frugal, but the best way to safeguard any weapons you’re leaving in your room is to not stay in the CrackHouse 6 that’s on the wrong side of the tracks. I actually have a whole rant on this, but if you’re going to spend a significant amount of time on the road shooting matches, being comfortable the night before you shoot is actually important. I know I’ll sleep much better in a Hilton Garden Inn in a decent part of town than I would in a Super 8 by the train tracks. A good way to find a relatively decent area is to look on Google maps for clusters of mid-tier hotels. If you find a spot where there’s a Hilton Garden Inn, a Hyatt Place, and a Courtyard Marriott all clustered relatively close together, there probably isn’t a crack den nearby. Also, never stay on the first floor if you can avoid it.

A certain amount of signaling is going to be inevitable, especially when you leave the hotel wearing your cool-guy jersey. But you can do some simple things like not covering your personal vehicle in gun decals, not hanging around the hotel lobby with obvious weapons cases, things like that.

Want to keep people out of your room? Use your Do Not Disturb sign. Now this tip is less as a frequent traveler, but in a past life I was also a Housekeeping Manager for a Major Brand. Let me tell you what, when a housekeeper sees that a room has their DND up, she (or he) is ecstatic. “Hell yeah one less room to clean” means less work for the housekeeper. One thing to note: most hotels have a policy on when they’ll “break” a DND sign, however if you’re just in town for a weekend match you’re not likely to run afoul of those guidelines.

Step 4: Lock your guns up (but not in the hotel safe)

Some hotel rooms have cheap electronic safes in them. Those are for things like jewelry and trinkets, not important items like your $3,000 open gun. If you flew to the match and had your gun in a locked case, leave it there. Leave it locked up. Take the keys with you wherever you go. If you drove to the match, I would strongly consider adding a locking case to your packing list, specifically to provide more secure storage for your gun. You could get even more wild and bring a bike lock/chain or handcuffs with you and in addition to locking your gun in a box, you could then lock the box to something like the bed frame or the pipes under the sink. To be honest that’s pretty extra, but if it makes you feel better.

Step 5: Accept the fact that if someone really wants to steal your gun out of your hotel room they will

I know this sounds crazy, but here’s the thing. All the safety measures above are designed to deter opportunistic theft. A housekeeper that needs to make a car payment seeing your gun and grabbing it, a smash and grab through a window, etc. If a professional thief that targets travelers decides they want to get your luggage/your gun, there is a very good chance they’re going to get it. This is why I personally have all my guns insured on my homeowner’s insurance or through a valuable personal property policy. An even better way to avoid this problem is to be a real man and just shoot your carry gun at matches so you never have to leave it in the hotel.

Leaving a gun in a hotel room is a risk, there’s no question about that. Taking the four steps above are all designed to mitigate that risk, and work together by playing into most people’s casual laziness, the inherently risk adverse nature of hoteliers, and adding in a dash of common sense security measures. In fact, having a gun stolen out of a hotel room (from a decent hotel) is so rare that I’ve never heard of actually happening. I have however heard of lots of guns stolen out of cars in hotel parking lots. Like they say in law enforcement: we call that a clue.