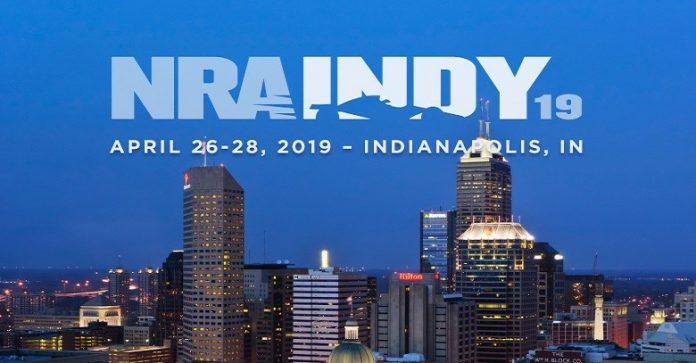 That was the week that was.

Even in its ordinary aspects it was another terrific experience: 15 acres of booths, displays, demonstrations, freebies, giveaways, and meeting and greeting many old friends and making many new ones. Scores of thousands of people all united by one important thing—devotion to the sustenance and expansion of the Second Amendment to the Constitution.

Dr. John Edeen and yours truly attended on behalf of DRGO. Each year we run into more people who already know about us, who are members, and who tell us how they appreciate our representation of rationality in medical and epidemiologic research, so sorely missing in most officially published “research” into “gun violence”.  That helps all of us at DRGO realize the worth of our mission and charges us up to keep at it.

How often can we see our Vice-President and President speak? As credentialed members of the press (in fact, as temporary members of the “White House Press Pool”!) we got to watch them, Senators, Governors and activists close enough to tell which was which in the 63,000 seat Indiana Pacers’ Lucas Oil stadium.

A very meaningful moment was the presentation of the inaugural Roy Innes memorial recognition, posthumously, to the family of Otis McDonald whose unwavering insistence on his rights led to the momentous SCOTUS decision known as McDonald v. City of Chicago, confirming the application of the Second Amendment right to keep and bear arms throughout all these United States. The award will continue to be awarded to those who contribute the most to bringing underrepresented groups into the fight for this aspect of civil rights.

But now to the most exciting and consequential parts.

As we all have been learning, several threats to the integrity, and possibly the future, of the NRA are about to collide. Andrew Cuomo, the governor of New York where the organization was formed and incorporated in 1871, has declared his intent to close it down if possible using all of the state powers available. He has already informed financial organizations that New York will view them askance for trying to do business with NRA. New York’s attorney general Letitia James is investigating questions of malfeasance and impropriety in NRA’s financial management. She could use her findings to decertify the organization and destroy it. NRA is suing New York state on the basis that its actions are censorious and depriving it of First Amendment rights to free speech, which is a potentially powerful argument.

Simultaneously, questions have arisen about the vast sums NRA has been paying its chief contractor, Ackerman-McQueen, since the 1980s. A-McQ is an advertising agency based in Oklahoma that provides “public-relations work, marketing, branding, corporate communications, event planning, Web design, social-media engagement, and digital-content production” for NRA. This includes all sorts of marketing, but A-McQ also puts on the meetings, and owns NRANews, NRA’s very media identity. Upon this becoming a public issue, NRA sought greater detail justifying A-McQ’s billings, which A-McQ declined to provide. NRA is now suing A-McQ, which is counter-suing.

Relatedly, the web of connections between NRA and A-McQ is coming into light. NRA’s celebrity president Oliver North has been paid millions by A-McQ to produce documentaries, though has only come up with two. Wayne Lapierre, NRA’s 28 year executive director, is not only paid $1.4 million a year, but has received over $230,000 in wardrobe subsidies for the past 13 years. His contract also reportedly includes a golden parachute, assuring him $1 million yearly upon his retirement to continue serving as a consultant to NRA. Is any of this play to pay? NRA has announced that it is reviewing all this internally. It’s attorneys say there is nothing illegal of improper.

At Friday’s NRA-ILA Leadership Forum speeches were led off by North, who was in good form. Lapierre spoke later, and looked nervous. He was not on stage thereafter (though this was Chris Cox’s party, as NRA-ILA’s director).

We learned that day of an exchange of letters between North and Lapierre. North had asked for Lapierre’s resignation, and announced he was forming a special committee to do internal oversight of  the NRA—A-McQ conflicts. His goal seemed to be to shake up the organization and establish new leadership, which by now many members were wanting.

Lapierre called this extortion, saying that North had said that A-McQ would release damaging information about his leadership and staff, and refused to resign. On Saturday, at the actual annual meeting of members, the 1st Vice-President read a letter from North explaining his absence (the President normally chairs the meeting). He had learned he would not be endorsed by the Board of Directors for the usual second one year term, so he resigned as President.  It was not clear whether he also resigned as a Board member. Lapierre was present throughout the meeting and in his usual strong form again.

Like any large formal gathering, the Annual Meeting is normally pro forma, adjourning soon after minutes are approved and announcements are made, leaving any motions for the Board to decide on subsequently. But this weekend the first motion to adjourn was strongly defeated by the members voting. A number of members called for a discussion of the financial and linkage issues there and then. This got somewhat sidetracked by a motion to go into “executive session” (meaning that only members could stay). This became a proxy for the question as to whether these matters should even be discussed with the general membership outside the Board, which has dealt with them confidentially so far.

Concerned members like Adam Kraut (who came in second for the 76th Board seat that is always elected at the Annual Meeting) and Rob Pincus spoke in favor of the executive session, i.e., for public discussion of the problems in order to accelerate solutions. Established figures like previous NRA presidents Jim Porter and Marilyn Hammer spoke against, citing the need to avoid informing parties to legal action of details that would come out publicly thereby.

On a personal note, I’ve spoken with several respected Board members who have no connections with A-McQ or the substance of the other questions in the air. They are serious, responsible people who affirm that they are pursuing answers internally and will do whatever it takes to right this ship and steer it back on course.

The motion to enter executive session was defeated and shortly after Kraut made a new motion to adjourn, which the membership overwhelmingly approved. It was clear that nothing else was going to be accomplished there on these subjects. However, the leadership of NRA became thoroughly aware that there is major, broad-based worry by the membership about what has happened and how it is being handled.

The transition of yearly terms took place following the Annual Meeting at the Board meeting on Monday. The election results for Board seats were confirmed. All the new endorsed officers were elected and Lapierre was unanimously asked to continue as Executive Director. He in turn reappointed Cox as the NRA-ILA director.

So where does all this leave us, the grass roots supporters and activists for the RKBA?

These are critical battles being fought, and beyond the fact that the NRA itself is worth saving, it’s not clear what else should or will happen. The organization is certainly far more important than who leads it at any given time. Josh Powell, NRA’s chief operating officer about whom there had developed a lot of distrust, had already been replaced.

Whether now or later, and as effective a leader as he has been, Lapierre is aging and there will ultimately be a succession. Will Cox inherit the world of NRA from Lapierre? NRA-ILA is not very involved in these conflicts with NRA. Does there need to be a clean sweep of all top leadership? Should NRA bring at least its media activities under its own direct control? These shows and personalities are the most visible faces of NRA.

The divorce of NRA and Ackerman-McQueen is unfortunate and will be messy, but is probably overdue. Neither party can really kill the other.

The legal (if perhaps unconstitutional) attacks on NRA by New York state are much more threatening to NRA’s existence. Besides its public visibility as the 800 pound gorilla of Second Amendment activism, it makes enormous investments in training programs all across the country. It has a deeper, wider and more committed base of supporters than any other civil rights or non-profit organization. It’s a big target, whose fall would change the “conversation” about guns dramatically, and not in our favor.

No one knows the answers yet. But this was the most dramatic week in NRA history since the 1977 “Cincinnati Revolution” and its founding in 1871. NRA’s goals and purposes have changed several times during its history, and we could be seeing the start of another tectonic shift.

Stay tuned to see what happens. As the gunfighters say: “This ain’t over yet!”