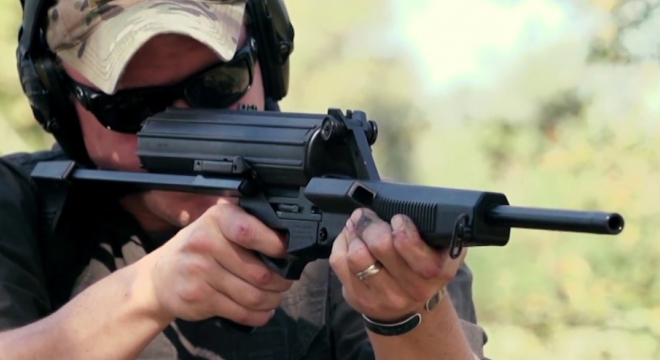 Designed in California of all places, the Calico-series featured a top-mounted 50 or 100-round magazine as its hallmark.

One of the neater guns as far as practicality — as well as one of the few to successfully use a helical-feed magazine — these sprang from the line of the Calico Light Weapons Systems from 1982 onward. Although their marketing was stymied for about a decade due to the federal assault weapon ban, they are back in production.

In the above “I Have This Old Gun” segment, ARTV takes a look at the now-classic Calico Carbine. And speaking of American Rifleman, the NRA Museum has a very special Calico M900 in their collection. Note the serial number.

#GunOfTheDay – The 9mm Calico carbine’s detachable magazine is based on the Archimedean screw, an ancient mechanism used to lift water. The stacked ammo moves towards the firing position the same way. Made 1980-2010, they were popular in sci-fi movies. #NRAmuseums #guns #carbine pic.twitter.com/O98pMhp764