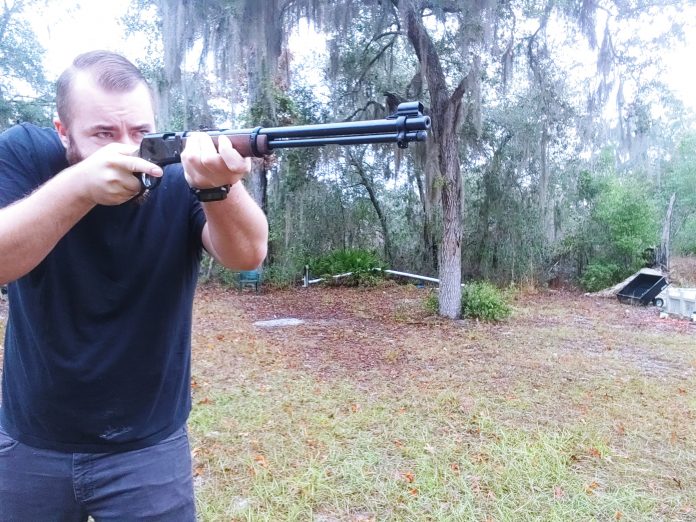 As the holidays come around, I get to remember a yearly tradition between my brother and sister and I. As kids, we shared a Henry 22 LR lever-action rifle. We loved it, and after we grew up, it started this tradition of traveling from home to home. While over the times the time we swapped guns has changed depending on what someone’s doing, the tradition of exchanging the rifle starts on Christmas or Thanksgiving. When we come together for the holidays, the guns get broken out, and we shoot and plink. That’s when someone else takes the old Henry home.

This year I ended up with it. It’s been a few years since I’ve loaded the old gun and went shooting, but today that changed. I have forgotten how much fun this gun is. I’m a little bigger now, and this gun is a lot smaller than I remember. The loop barely fits my hand, and the length of pull is a bit short, but man does this gun shoot.

While the Ruger 10/22 might be the AR of the rimfire world, the Henry is a much more stylish piece. This lever-action gun harkens back to the old days of spaghetti westerns and gives you a bit different rimfire experience.

The Henry brand is well known for their well made and easy shooting lever-action rifles. They’ve also produced the AR 7 for some time and even some lever-action shotguns. The Henry 22 LR rifle, known as the Classic Lever Action Model H001, is a classic gun. It’s still produced to this day, and over a million have been sold. The Henry rifle is affordable. It often costs less than 300 bucks and is a little cooler than your basic semi-auto 22 LR rifle.

The gun is also capable of handling most different types of rimfire 22. It can reliably cycle Long Rifle, Long, and Short. With long rifle, the gun can hold 15 rounds, in 22 long it can hold 17 rounds, and in 22 Short, you can squeeze in 21 rounds. The magazine is, of course, a tube that sits under the barrel as with original Henry designs.

The magazine tube is loaded through the top of the tube, and a spring-loaded plunger locks it down and ensures the rounds feed as the lever is worked. The barrel is 18.5 inches long, and it weighs just a touch over 5 pounds.

My gun originally came with open sights all around if I remember, and somewhere along the way, someone added a hooded front sight. That also seems to be a factory option for these rifles. The top of the receiver has a groove to allow for mounting optics too, but this has always been an iron sight gun as far as I know.

Do you know what I love about this gun? They didn’t over safety it to a ridiculous degree. The Heritage revolvers are great, but a single action revolver with a manual safety is a bit much. The Henry H001 is as simple as it gets when it comes to gun design.

You have a lever, a trigger, and a hammer, and that is it. There is no safety beyond the action opened and an empty chamber. There is a half-cock position in the hammer’s motion. To decock the gun, you have to hold the hammer and guide it down slowly.

The lever moves remarkably smooth. Without a doubt, 15 years of ownership and thousands of rounds downrange have likely smoothed it up, but to be fair, Henry rifles are also already very smooth. With a proper grip, your thumb has no issue finding the hammer to decock it safely with it pointed downrange.

The loading design doesn’t allow you to feed the gun rounds as you shoot. To load the gun, you’ll have to stop shooting, remove the plunger, and drop some shots in. No shoot two, load two with the Henry rifle.

Range Time with the Henry

The trigger is delightful. It’s super short, very light, and is perfect for accurate shooting. The little Henry’s trigger is, without a doubt, one of the better rimfire triggers. It makes it easy to shoot, especially for kid shooters looking to learn accurately.

As you’d imagine, this gun has no recoil. Not even a touch of it. It barely moves when mounted to your shoulder, and that’s perfect for new shooters. The satisfaction manually operating the action is second to none. It’s like pumping a shotgun in terms of cool factor. From the motion to the noise, it makes it’s a satisfying experience all around.

The open sights are more than sufficient for the 22 LR and the plinking this gun is designed for. They are slightly adjustable, but I doubt that’s ever been done with our rifle. It shoots plenty straight in my experience. You can smack the cherry off a cigarette at ten paces. That used to be a standard contest between the family; the same goes for how fast we could shoot all 15 rounds with the manually operated action.

We channeled our inner Rifleman and would try to work the action and pull the trigger as fast as we could without missing a Pepsi can.

It’s a great small game getter, and many a squirrel and rabbit have been turned to stew because of this rifle. I took it out today and lit up a ten-inch steel gong over and over and was greeted with that nostalgic feeling of handling my old Henry.

It’s such a fun gun to shoot, and as a Christmas present, it’s lasted my family nearly 15 years. We’ve shot thousands of rounds through it, and I doubt we stick to a proper maintenance schedule with the gun. Yet it still goes bang, and it still shoots true round after round. This is a fantastic rifle and one I love shooting still. It’s given me the desire for a larger, more powerful lever gun.