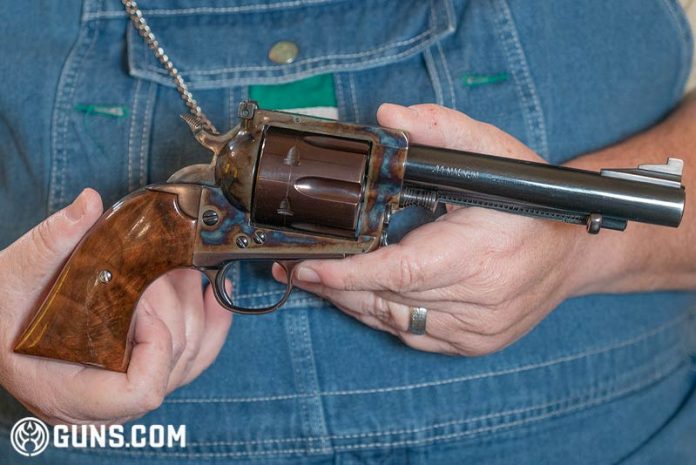 The revolver belongs to Boge Quinn of Gunblast. Quinn recently spoke to Guns.com about the gun, which is part of personal revolver collection.

Bill Grover founded Texas Longhorn Arms on the premise that ‘Sam Colt must have been left-handed’ because Colts, and all subsequent single-action sixguns, have the loading gate on the right-hand side of the frame.

This means the shooter must switch the gun to the left hand to load and unload. Grover made his sixguns backward, with the loading gate on the left-hand side of the frame. All other aspects of Grover’s guns are also backward. Even the cylinder moves in the opposite direction.

“Grover’s Improved #5” sixguns are based on the famous Elmer Keith #5 sixgun, first featured in the April 1929 issue of the American Rifleman magazine. It introduced a new grip shape, upon which Ruger later based their Bisley grip shape, and an improved cylinder base pin latching system.

Grover called his #5 ‘Improved’ not only because of its right-handed design, but also because it used more modern steels and coil-spring designs, and it was beefed-up to handle the .44 magnum cartridge. The .44 mag didn’t exist when Keith’s .44 Special #5 was made.

Quinn is a big fan of Grover’s guns and owns a few of them. He got them before Grover went out of business in 2004. In that same year, illness took the life of the talented gunmaker.

During his time, Grover produced around 1,000 revolvers. Many of them are collectible. Quinn is happy to own a few of them.