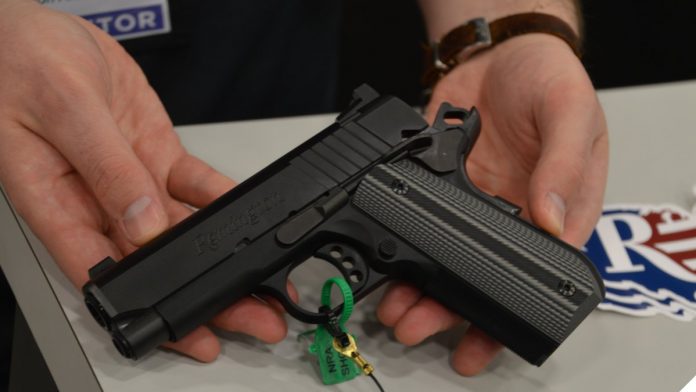 The bill would keep those without LTC or similar permit in Texas from getting charged with carrying a handgun during an evacuation (Photo: Chris Eger/Guns.com)

The Texas legislature has advanced a measure to allow those in the Lone Star State to carry handguns without a license during an emergency.

The measure, HB 1177, passed the state House 102-29 on Thursday, spinning it up for action by the Senate. The move would allow those complying with a mandatory evacuation order the ability to temporarily carry a handgun without first having to have a license.

Texas requires License To Carry permits for both concealed and open carry and issued more than 340,000 LTCs last year alone. The proposal now in the legislature would amend state law to exempt an unlicensed person from a charge of unlawful carrying of weapons as long as they are carrying while evacuating during a state of disaster. The period would be limited to 168 hours since the evacuation was ordered and only apply to those who can legally possess a firearm.

According to witness documents, the bill is supported by Second Amendment groups such as the National Rifle Association, Gun Owners of America, Open Carry Texas, and the Texas State Rifle Association. In opposition is the League of Women Voters of Texas and Texas Gun Sense, the latter a local gun control group.

“Texans should be able to protect themselves and their loved ones, and to legally transport their lawfully-owned handguns if they are evacuating by means other than their personal vehicles or their own watercraft during a declared disaster,” notes the NRA in a statement about HB 1177. “They should not be denied the ability to take certain firearms with them for fear of breaking the law and be forced to leave them behind for potential looters.”

The bill is similar to one adopted in hurricane-prone Florida in 2015. The Sunshine State has a prohibition against concealed carry of a weapon without a permit and only narrow exceptions for open carry, such as while hunting or fishing. Neither state currently recognizes permitless or constitutional carry.