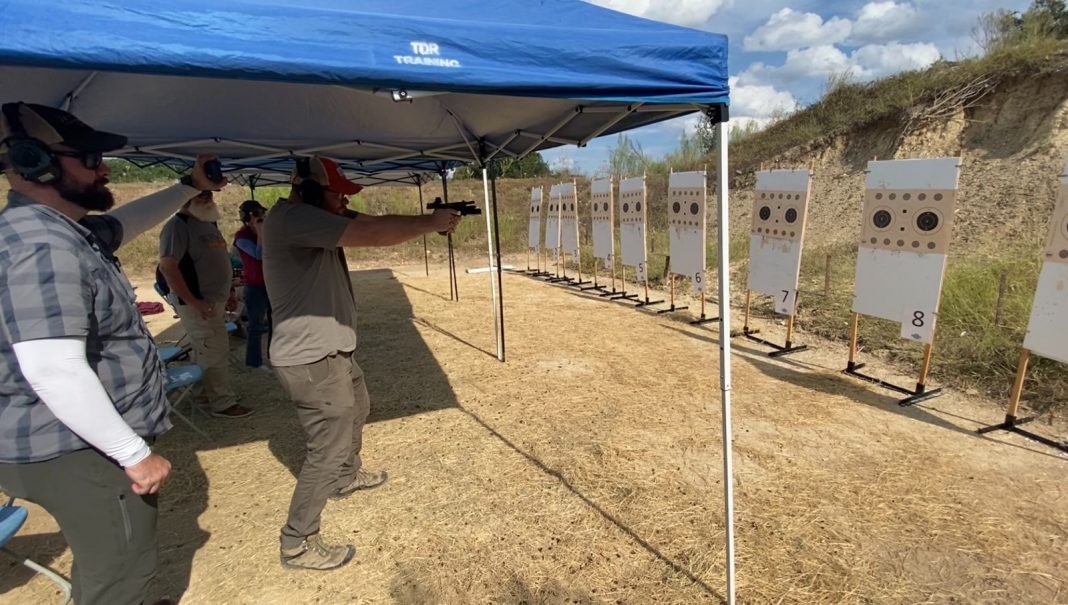 Recently, I took Citizens Defense Research Tests and Standards course for the third time. I have been fortunate to see this course’s firsthand evolution and progression since the first time I took it in 2019, when it was still a one-day class. What the course currently offers is a night and day difference from that first time I shot it. And even then, it had something to offer.

Test and Standards is a relatively high round count (for 2022 standards (pun fully intended)) two day course of approximately 500-700 rounds that focuses on purely technical pistol shooting skills. The course and the instructors cover every aspect of making a pistol shot, from the time the pistol is first drawn through the end of a string of shooting. All shooting is done either at three or five yards, and students deliberately shoot at smaller targets such as one inch squares or two inch circles. However, the biggest aspect about this course and perhaps the reason to take it is the fact that there are few open enrollment courses that offer the level of individualized feedback and evaluation from the instructors that Tests and Standards provides. The instructors filter through the entire group of students and take notes on every individual. Afterward, students will go through a series of one on one coaching and evaluation that includes a “diagnosis” to their shooting ills and the “prescription” to improve whatever pistol malady they may suffer from. Students are encouraged to focus on this throughout the remainder of the class.

The other huge aspect that students may not likely find anywhere else is the fact that this class includes a good amount of individual and group dialogue about shooting itself. With the level of discourse and insights offered by the instructors, I’d suggest to the prospective pupil to bring a notebook and be prepared to take copious amounts of notes or some type of audio recording device. The sort of feedback students gain along with the individualized attention are worth the price of admission. These instructors have a knack of analyzing their students to a deep extent and in ways I have not witnessed at other shooting courses. Personally, every time I’ve taken Tests and Standards I have been able to improve my shooting ability and I become that much safer and faster. I distinctly recall learning very safe appendix-carry reholstering habits during my first class that are ingrained in me to this day. During the second and third times I’ve taken this course, the instructors have helped me not only develop a faster and smoother draw but also gain confidence in the skills I already had within.

It wasn’t until the last iteration of Tests and Standards that I participated in when I realized just how richly detailed and nuanced the group discussions provide. More than once I have seen miracles on CDR’s firing line occur over the course of one weekend. Some of you are probably reading this and you know who you are. I have witnessed the instructors touch and connect with their students to the extent that grown men have been brought to tears after overcoming some type of mental or habitual shooting hurdle that was setting them back from shooting as well as they could. I mentioned previously how I have been party to Tests and Standards’ evolution from those one-day classes into what it currently is. Citizen’s Defense Research deserves credit for always striving to pro-actively evolve their classes and their efforts in keeping their material relevant. That very first class felt like running a battery of shooting drills and tests under organized coaching (good coaching might I add), but this latest rendition challenged students to take into account their internal moods and feelings when shooting. This is impressive because Lanny Bassham, the competitive Olympic shooter who wrote the book, With Winning In Mind, leans heavily into some of these internal state concepts.

Aside from the material and discussion topics, it bears mentioning that Citizens Defense Research strives to provide the best learning environment possible. The instructors constantly remind students to stay hydrated and during the last two iterations I have personally attended, they provided awnings directly on the firing line. The shade certainly ensured that everyone had a better time while avoiding sun fatigue: something that can drain anyone after a few hours. After all, as students we spend so much time and effort traveling and attending private shooting courses. So why should we diminish the return on our investment by distractions like sun fatigue and unnecessary loss of energy when they are easily avoidable?

Tests and Standards does not require any exceptional or advanced shooting ability, per se. With the individualized coaching, the instructors have something to offer shooters of every skill level or demeanor. The only real requirement asked of prospective students is a focus on safe firearms handling and a safety mindset.  Moreover, the class is gear and pistol agnostic. Most any reasonable holster, whether carried openly or from concealment is welcome. (Maybe leave the SERPA at home though). Red dots or irons sights, it does not make a difference because Citizens Defense Research will help you get the most out of each system. I would like to point out that revolvers are not the best choice for this specific course as most of the drills and exercises are set up around a semi automatic handgun with a magazine that holds at least fifteen cartridges. Prospective students would do well to show up with no less than 800 rounds and at least six magazines, to be safe. That said, CDR is very mindful about the usefulness of each trigger pull and they avoid needless blasting.

Safe shooters of any skill level interested in expanding their shooting awareness, analyzing their personal shooting process, and doing the work will probably gain something from taking this outside-the-box pistol class.