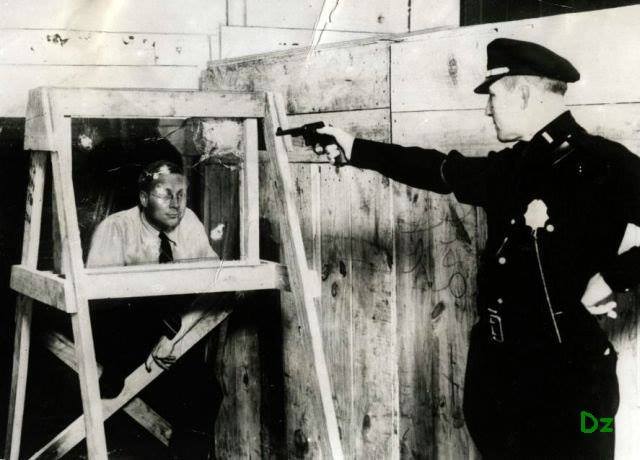 The silent footage, purportedly from 1931, shows an Ohio couple demonstrating what is billed as bullet proof glass while his wife stands behind it.

As noted by source EFootage.com, the short clip shows an unnamed couple from Toledo as they fire at a a pane of bullet-proof glass that reportedly resists a .25-20 rifle, though Snopes and other debunkers cry foul citing that the film is edited from multiple takes and is likely movie magic.

The below image, courtesy of the Dutch National Archives (hey the Dutch like to keep neat photos) is purportedly of a “Bulletproof glass, demonstration by the best rifle man of the New York police, 1931” which is the same year and the above and about the same size glass pane.

Finally, there is a patent filed in 1931 by one William E. Nobbe, of Toledo for a composite safety glass sheet of “bullet-proof glass” which was later assigned to the Ford Motor Company.

Now whether the video, the photograph and the patent all belong to the same invention is anybody’s guess. But one thing is for sure, the stern looking woman with the sensible haircut in the footage doesn’t have trust issues and no one should try this at home.