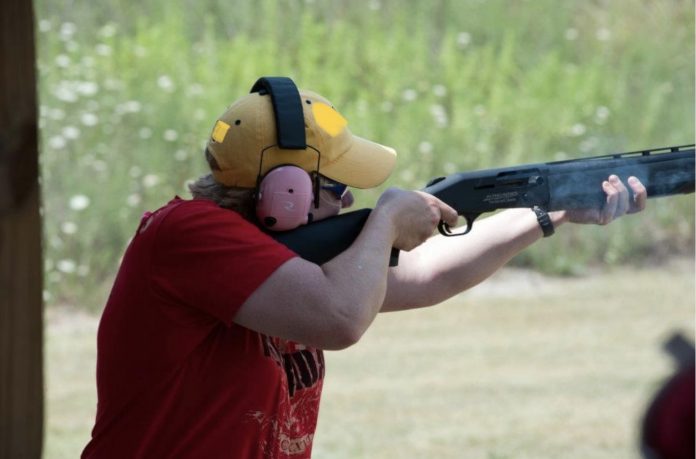 Facebook “memories” has a terrible way of making me feel old. Just the other week it showed me that it has been ten years since I was first introduced to the semi-auto shotgun. 12 gauge semi-auto Mossberg JM specifically – taught to me by the actual JM himself.  I know, I know, but it was the group I was training with, not me that was special.

This was a Babes With Bullets camp specifically for learning 3-Gun. By that point I had been doing pistol IDPA competition for a few years with my Gen 3 Glock19, and I had purchased an S&W M&P15TS for my rifle. But I didn’t yet have my own shotgun, and hadn’t really shot one either. But I wanted to try 3-Gun, and Babes Camp with Head Instructor Kay Miculek had the JM’s as loaners to try, so that’s what I did.

If you haven’t had the pleasure of meeting Kay Miculek in the flesh, well that is your loss. A more talented shooter, skilled instructor, and gracious woman has never walked the earth. I’ve lost track of how much instruction I’ve had from Kay over the years through various Babes Camps, but each session was a pleasure and an education.

The Camp was held in Iowa at the Brownell’s facility, which was absolutely wonderful. But that meant that I roadtripped all by myself all the way to Iowa – an 800 mile solo journey one way – including through thoroughly gun unfriendly Illinois. Up to that point I had never driven that far solo, let alone across state lines with firearms and ammunition on board, so that in itself was an adventure. Yeah I know, whatever – get off my lawn. It was a big deal for ME.

It so happens that camp that session was also staffed by Lena Miculek and Jerry Miculek. The Miculeks being – well – the Miculeks, there were sponsor guns available to shoot so that those of us without our own could “Try before you buy”.

Thus it was that I ended up being coached on the 12 gauge shotgun – using a Mossberg JM – by the actual JM himself, Jerry Miculek. It is a fine measure of great and talented people who can lower themselves to instruct rank beginners. And I was the rankest of the rank.

I won’t go into too much detail, but watching me fumble and drop shell after shell while struggling to learn weak hand reloading had to be painful. This was also the era BEFORE the over-the-shoulder-load-four-at-a-time technique that 3-gunners use nowadays. Amazing how techniques evolve over time. In only ten years it’s a completely different ballgame. One which I sadly no longer play. One should know one’s limitations and after a few years I learned mine.

But this camp and this 12 gauge instruction gave me the basic skills and knowledge upon which to base my own future shotgun purchases. Ten years later I now own two Benellis and two pawnshop Mossbergs, which I have used in 3-Gun, Turkey hunting, Duck hunting, Clays shooting, Upland hunting and a self defense class. All of which was totally worth a midlife 800 mile roadtrip to learn from legends.