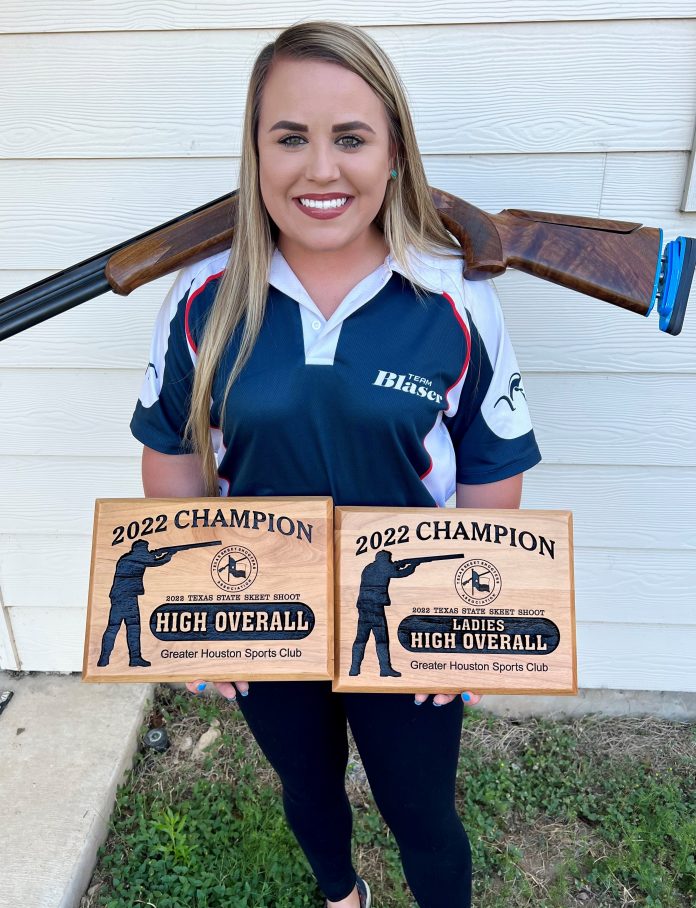 San Antonio, Texas (June 9, 2022) – Team Blaser’s Rachel Barringer hit 398 out of 400 clays to win High Overall Champion (HOA) in the Texas State Skeet Championships in a field that included 123 men and women. Her impressive shooting also won her the title of Ladies Champion.

The event was held June 2-5, 2022, at the Greater Houston Sports Club in Houston, Texas. Under sunny skies and temperatures well into the nineties, Barringer started off the week with a 97/100 in Skeet Doubles and 100/100 in 12 Gauge, placing runner-up in both ladies’ events. In 20 Gauge, she shot 100/100 and after a long shoot-off, won the Texas State Open 20 Gauge Championship and Ladies Champion. She also shot 100/100 in 28 Gauge winning the Ladies Championship. Barringer followed that with a 98/100 in .410 placing third in the ladies’ division. The combined performance led to her state championship title. She is the second woman in the history of the Texas Skeet Shooters Association to win this title in the last 50 years.

“I am so honored to hold the Texas State Skeet HOA Champion title,” said Rachel Barringer, Digital Manager, Blaser Group. “This has been a goal of mine for many years, and I am truly humbled. This would not have been possible without the endless support I’ve had from my employer and sponsor, Blaser USA, or the confidence I have in my Blaser F3 shotgun and other products I’m using.”

“We are so proud of Rachel’s incredible accomplishments in these competitions,” said Jason Evans, CEO, Blaser Group USA. “She is dedicated to excellence, both in her shooting and profession as our digital manager. We salute her hard work, and also the grit and dedication of the other Team Blaser members who put in outstanding performances at these championships.”