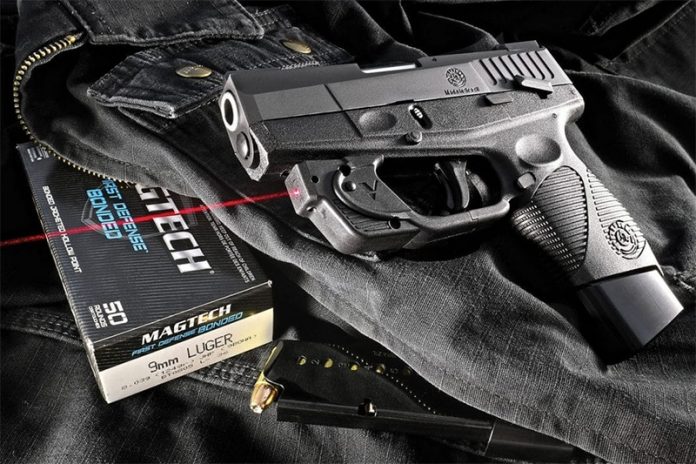 The Taurus PT709 SLIM pistol is not new for 2017, but we’ve never reviewed it and its attractive price point left us curious of how much gun you got for the money. Available only in 9mm (7+1 capacity)—priced at a sticker smashing $319 with black slide or $339 with brushed stainless steel slide—our evaluation PT709 SLIM had the black slide.

Built on a polymer frame with a DA/SA trigger system but no external hammer, the SLIM gets its name from its narrow, 7/8” width. From the factory, it features a windage and elevation adjustable white-dot rear sight and a fixed white-dot front sight. The rear sight is adjusted using a small screwdriver blade incorporated into the Taurus Security System key. Other features include rear slide serrations, red loaded-chamber indicator on top of the external extractor, Glock-like trigger-blade safety, external manual safety mounted on the left side of the frame, enlarged trigger guard for use with gloved hands, ambidextrous thumb rests, textured grip frame and the key-operated Taurus Security System to lock the action. The key hole is located at the top rear of the slide on the right side just under the rear sight, and two keys are provided. With its 3-inch barrel, overall dimensions are 6.0” L x 4.5” W x 7/8” W. It weighs 19 oz. empty with magazine and comes with two single-stack steel magazines with polymer base plates.

In the box you’ll find a discount coupon for a Viridian Essential Series red laser module (www.viridiangreenlaser.com) specifically designed for the PT709 that mounts on the trigger guard ($139 MSRP). A “scratch and sniff” panel on the coupon reveals your discount, which can run from 5% to 25%. Ours was a 25 percenter, so we obtained the Viridian laser module and installed it. It was a quick and easy job, and we were impressed with its form-fitting shape and size. Its 5mW, 650nm laser projects an easily visible, bright red dot out to 25 yards in full daylight conditions and out to one mile at night. The laser is factory sighted, but is easily adjustable for windage and elevation with the provided tool.

Since the PT709 SLIM is intended as a concealed carry pistol, we decided to add a couple of accessory items. Heck, with a starting price of only $319, you can afford a few extra do-dads that enhance performance. First, we replaced the factory contrast sights with a set of TruGlo TFX Tritium/fiber optic day/night sights. Even with the Viridian laser—which has batteries that will go dead eventually (six hours in this case)—we consider night sights mandatory equipment on a carry gun. We chose the award-winning TruGlo TFX sights because they also provide bright green sighting during daylight hours.

The PT709’s 7+1 capacity is right in line with other, similarly-sized/chambered carry pistol’s, but wanting a little extra payload, we went looking for magazine extensions. The only ones we could find were +2 extensions from Springer Precision (http://shop.springerprecision.com)—made expressly for the PT709 SLIM 9mm. At $27.50 each they aren’t cheap, but being CNC machined from aluminum and hard anodized, they should be a lifetime investment. They match the profile of the grip and have a very smooth transition from magazine to frame, but do lengthen the front of the magazine by 1.1″.

When you subtract out the thickness of the factory magazine’s polymer base plate, however, the actual increase in overall height is only about 3/4”—a small price to pay in concealability for two extra rounds in a gun fight. The Springer mag extensions also allowed us to get a solid, three-finger wrap around the grip frame, which was a significant aid in controllability of this compact pistol under fire.

In rapid fire testing on steel plate targets we experienced no malfunctions of and kind. As noted above, the pistol was very controllable under fire, but perceived recoil and muzzle rise were a bit stouter than with heavier 9mms. For accuracy testing from the bench at 25 yards we used hollowpoint and ball ammunition from a variety of manufacturers—including Black Hills, Hornady Magtech, Federal and GBW Cartridge—in both 115 and 124-grain weights. All ammunition performed well in the PT709, but the never-before-used GBW Legend Pro 115-grain copper hollowpoint load won the day with its 2.10-inch five-shot group…well within our “happy zone” for concealed-carry-pistol downrange precision! 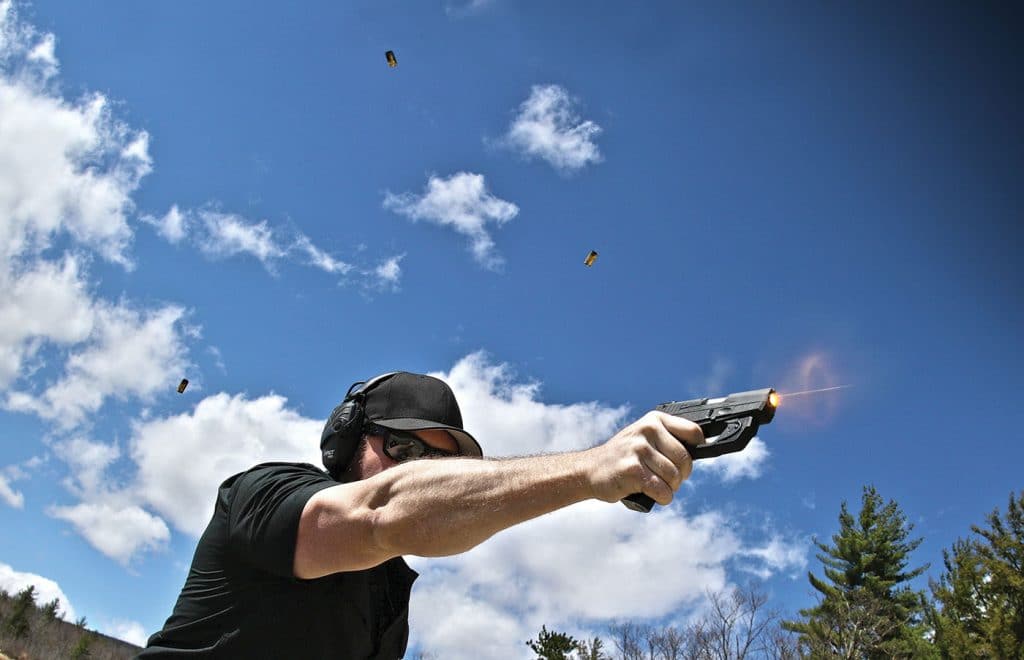 If we had any complaints with the PT709 it would be a trigger-pull that’s a tad on the long side (not overly heavy, just a little long) and a magazine release that’s a little on the small side. Other than those two small gripes, overall, we found the PT709 to be an accurate, reliable and easy-to-carry pistol at a very reasonable price. It’s also available chambered in .40 S&W as the PT740 SLIM at the same pricing. See it at your firearms retailer, or contact Taurus Holdings, Dept. OT; Tel.: (800) 327-3776; Web: www.taurususa.com