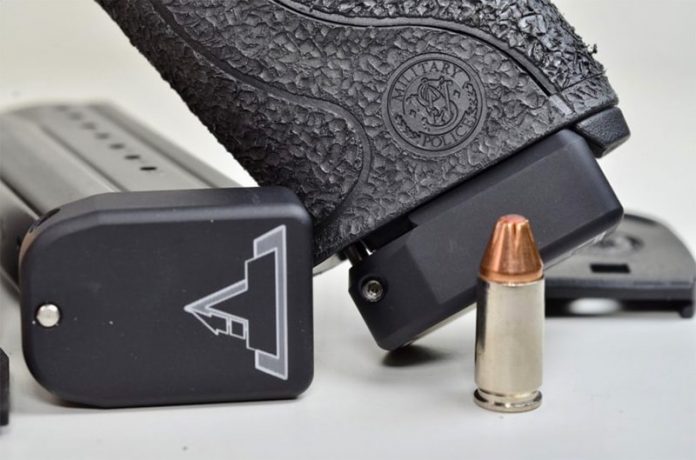 If you haven’t seen the video of actor Keanu Reeves training with Taran Tactical for his role in the “John Wick” film series then you haven’t been watching the internet enough. The actor’s video quickly went viral as he ran through the paces of a quick 3-gun session just over a year ago under the training of Taran Butler. While the video and the reaction has catapulted Taran Tactical Innovations into the national media attention, many of us already knew the company and their full line of products, to include the one we are highlighting today. The Taran Tactical Magazine Extensions, that are available for several brands and models of pistols.

It doesn’t matter if you are a 3-gun competitor, a conceal carry weapons permit holder or just the run of the mill average occasional shooter, everyone likes the ability to hold more rounds in their pistol. The ability to do that in a way that doesn’t permanently alter your gun or magazine is in our opinion a primary concern. Taran Tactical provides shooters the ability to squeeze a few extra rounds into your pistol and add a bit of weight to the magazine to help in assisting the empty magazine to drop free of your pistol.

Taran Tactical uses high quality anodized Aluminum and CNC machine technology to produce these extensions for twelve different models of pistols, and three varieties of rifles to include Sig Sauers new MPX Carbine. The company has gone to great lengths to ensure that shooters can in some circumstances use their stock pistol springs with the magazine extensions. They also made the extensions in a way that all you need to be able to install them is a 1/16 Allen (Hex) style wrench and a flat head screwdriver.

Lets take a look at the run down of available models, prices and colors for the Taran Tactical Systems Magazine Extensions.

I ordered two of the magazine extensions for the two factory Smith & Wesson magazines that came with my M&P 9mm, and they arrived via USPS mail about a week after I ordered them. Taran Tactical shipped them in the standard USPS flat bubble mailer and they arrived without instructions or diagrams. This was odd, but after a quick look on the web site they give very clear instructions on installing them into my magazines. I know it may seem like a very minor detail but some instructions or something telling me to look on the web site for instructions would have been helpful. Next all I needed was two tools, a small flathead screwdriver, and a 1/16″ Allen style key before I could get to work.

Once the extension slid into place I pushed up to fully extend the steel pin and used the 1/16 wrench to secure the pin in it’s correct position. A word of caution here, the company makes it very clear on their installation instructions that they do no warranty stripped locking screws on their magazine extensions. Using just enough force to firmly tighten down the set screw, shown in the above photos is the goal here, we are not trying to crank down on this screw. Once I was sure the screw was secure I removed the hex wrench that was capturing the magazine spring and tapped the magazine onto my work bench to ensure the spring was not hung up and securely in the magazine extension cup.

Installing the extensions took about two minutes a piece and that was going slow. The extensions appear to be well made and do exactly what they were advertised to do for my Smith & Wesson M&P 9mm magazines. They added a few extra rounds of capacity per magazine and added approximately 1.6 oz more weight to each one. This little bit of extra weight allows my magazines to fall free from the pistol a little cleaner. So I get a few more rounds, hopefully a little faster reloading time and I get to keep using my stock springs that’s a lot of upside for 1.6 oz per magazine in my mind. I will be able to test out this theory when my M&P slide returns DP Customworks in around six weeks, I hope sooner.

If you are a user of one of the guns that Taran Tactical supports with their magazine extensions and want to squeeze a few extra rounds into your pistol I would suggest taking the time and checking them out. The price and extra capacity that you gain and price will vary depending on what model and caliber pistol you are trying to support. Check out the company’s offerings at the link in the first paragraph or the link below.

Taran Tactical Innovations products can be seen at their web site: WWW.TaranTacticalInnovations.com