COLUMBIA, South Carolina — Recently I had the opportunity to tour the factory that makes the greatest home defense weapon ever conceived – the MK-19 automatic grenade launcher. Strangely, my wife disagrees. Apparently, the thinks that the blast radius is excessive and will wreak havoc on the furniture.

Yes, I’m talking about the FN factory here in sunny South Carolina. Located just outside of Columbia in the central part of the state, this FN plant makes all the fun stuff, not just for the military, but for the retail market too. Depending on the current government contract load and retail orders, you might see anything from M16A4s to FN-15s to handguns to M240 machine guns and even the MK-19 Automatic Grenade Launcher. 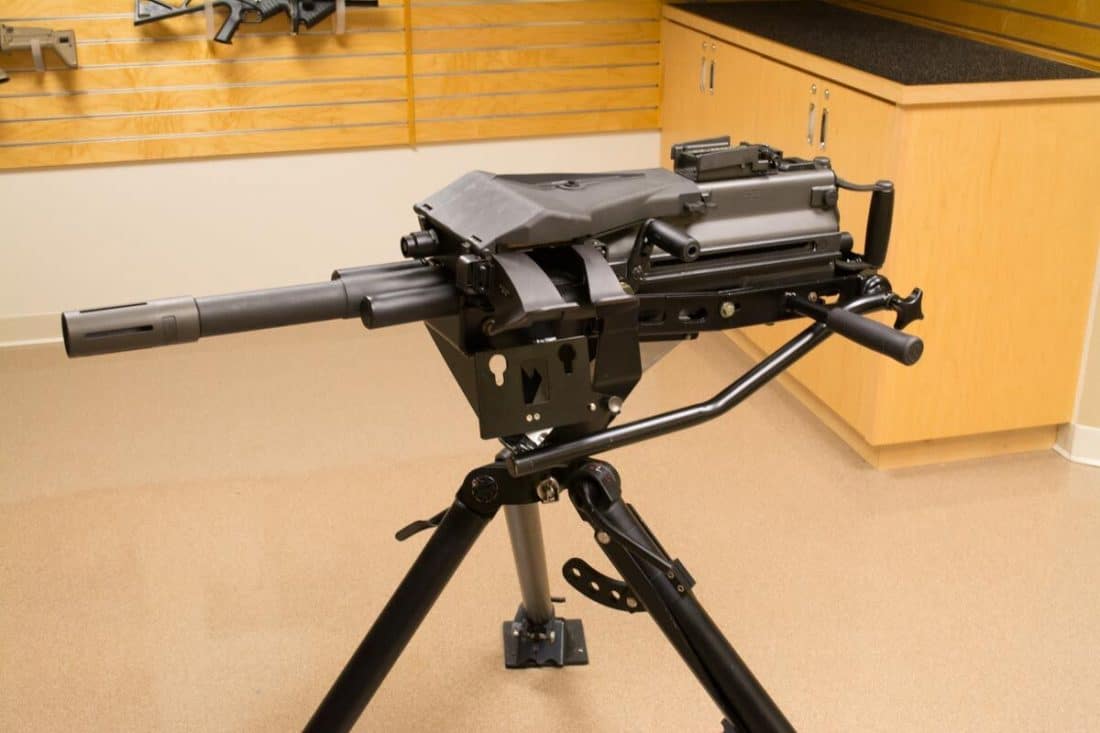 As a side note, FN is working on a small contract now for more MK-19s, so we did get to see some of that process while we were there. As we’ll see in this pictorial tour, FN goes to a lot of trouble to make quality guns – especially the barrels. Additionally, each and every one of the 3,500 guns that roll out of this factory every month is test fired for function and accuracy.

This plant opened in mid-1980 and by January 1981 was making M240 machine guns for Uncle Sam. At that time, those machine guns were destined for tanks – one coaxial with the main cannon and another mounted on the turret. Now, the facility has expanded its operations to include commercial guns too. Let’s take a closer look. 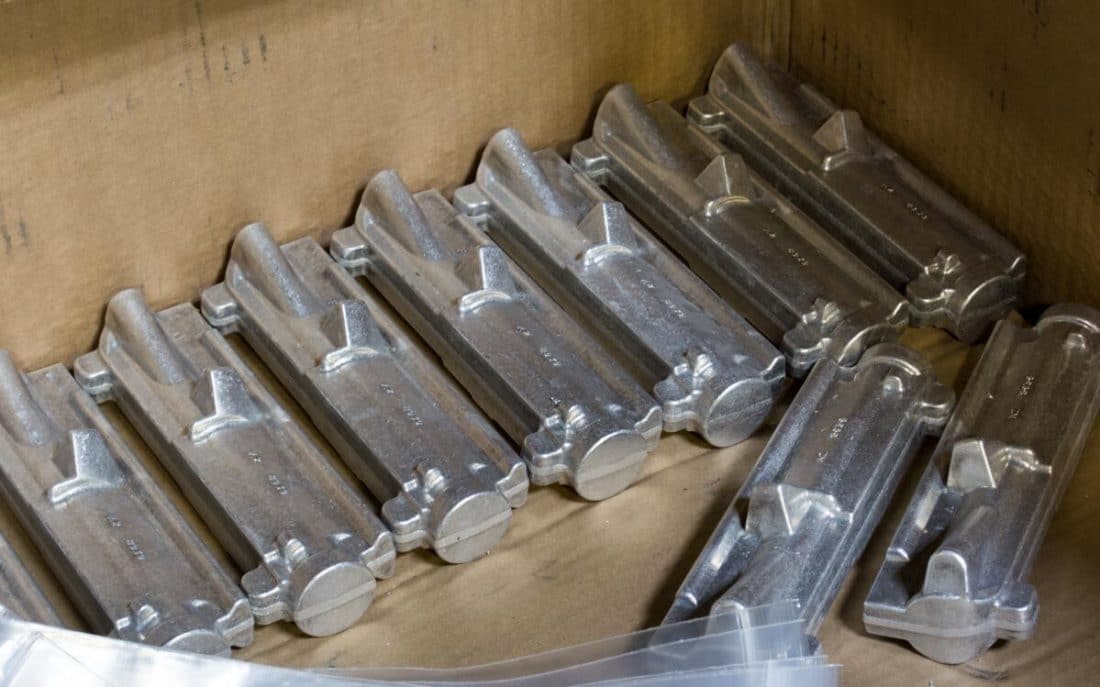 There are two starting points in the production process. Rough forgings arrive here for machining into receivers, bolts, side plates and various other parts. Barrel blanks arrive in the form of large steel bars. Both are drilled, cut, milled, hammered, polished, finished, and assembled into completed rifles, pistols, and machine guns.

First, let’s start with the machine line process. Receivers start as large, and very rough forgings. Through the process, over 80 percent of the metal is removed from the initial forging by the time a receiver is complete.

Something unique about the FN process in the machine shop is that each operator is responsible for specific lots of components. As a result, you’ll find measuring and gauging equipment throughout each work area. The operator who performs the machining steps is responsible for maintaining quality control along the way. However, all of their output is subject to additional quality checks by independent quality control engineers. Think of it as a redundant quality process. As an operator’s “name” is on each lot of components, it’s very much in their interest to deliver perfect results to the independent quality control staff. Not only is this facility ISO approved, but it’s also certified to manufacture parts for aircraft – a much higher level of quality certification.

At one point we strolled by some steel blocks destined to become bolts for the MK-19 Automatic Grenade Launcher. Our tour guide JP challenged us to try and pick one up. After a quick hernia surgery, I estimated the starting weight to be somewhere near 100 pounds. Now that’s a serious bolt. Of course, by the time it’s completely machined, it’s only going to weight somewhere in the tens of pounds. Yeah, only.

The CNC machining sections are impressive, but what really captivated me was the barrel shop. I’ve toured a number of factories and seen different takes on the process. What stood out here was the number of steps involved in producing each and every barrel. As a result, FN has become a supplier of barrels to a number of other companies. About the time of our tour, the FN folks were just starting the process of stamping their logo on all barrels supplied to other gun makers, so in the future, you’ll know for sure whether the barrel on your rifle originally came from the FN factory.

Barrels start their life as bars approaching two inches in diameter by my eyeball estimate. Whether destined to become rifle or pistol barrels, they all start as two to three-foot long rods. The first step is deep hole drilling. This process is completely automated, with a conveyor placing four barrels at a time into the boring machine. A rough bore is then drilled through the length of the bar stock.

The interesting thing about the barrel drilling process is that it’s silent and motionless. During the 10-minute drilling process, you can’t feel the machine move. That’s by design and the idea is to gain maximum consistency and precision even during the initial rough boring process. Part of the reason that the process is fairly fast is that drilling is done counter-rotationally with the barrel spinning one direction and the top-secret drill bit turning opposite.

The automation continues to the next step. As the groups of four drilled bars come out of the deep hole drilling machine, they’re fed by another conveyor into the next phase of the process, reaming. The reaming process finishes the bore by making the exact desired diameter and smoothing the interior finish.

At this stage, barrels face a fork in the road. Military guns with specific contract specifications may head to a button-broaching process. After reaming or honing the interior, a button is pushed through the bore to form rifling grooves. Other barrels, like stainless pistol barrels and those for guns like the FN-15 DMR head down the hammer forging line. First, these barrels are honed or reamed to establish exact diameters and interior finishes. Only then do they go to the hammer forge machines. FN obtains better overall results with stainless barrels, as on their pistol lines, by hammer forging. They’re somewhat unique in that their pistol barrels are hammer forged instead of button-broached or cut.

Hammer forging is a miraculous process that makes you appreciate the raw power of modern machinery. The simple explanation is that barrel blanks pounded with incredible force from the outside, thereby pushing the interior of the bore onto a shaping mandrel with an imprint of the desired rifling pattern. The steel literally presses inward to the mandrel and assumes the rifling shape. Ouch.

The four hammer carriers, with hammers attached, surround the barrel as it’s pushed through the hammer forge. A series of 12 rollers rotate at high speed, knocking the hammer carriers down towards the barrel blank as they pass by. Rather than discrete individual pounding, the operation resembles an electric mini-gun as compared to a semi-automatic. As the stock is literally beating into shape, it stretches because that steel has to go somewhere. This allows the FN folks to start with a bar that’s several inches shorter than they need because they know the final length after the hammer forge will be correct.

Once hammer forging is complete, it’s back to the CNC machines. Excess metal is removed and shaped depending on the desired final barrel type. One of the reasons that pistol barrels start out so thick is that there needs to be enough material to machine the chamber as the barrel and chamber are all one solid piece of stainless steel.

Rifle barrels also follow a progression of machining and measurement steps from this point on. As in other production areas, operators are responsible for their own quality control before items move onto a second independent quality control step.

Most of the complexity in the process is related to the production of parts. If they’re made to exact specifications and maintain tight tolerances, then final assembly is a pretty straightforward process. Workers assemble guns in small cells equipped for specific models.

Once assembly is complete, every rifle heads to the test range. Yes, every single rifle. Technicians perform live fire tests for both function and accuracy before a gun is certified for delivery.

I think we can all be thankful that FN’s guns for the commercial market are packaged differently than those ordered by the military. Military contract rifles are dipped in a giant vat of oil then allowed to drip dry. Without any further drying or cleaning, they are then packaged in sealed plastic bags. Presumably, new recruits get all the joy associated with cleaning them for the first time. At least they don’t use cosmoline!

Next time a prospective FN-15, Collector Series rifle, or FN pistol customer shows up at your store, you can share a little extra information about its origin.