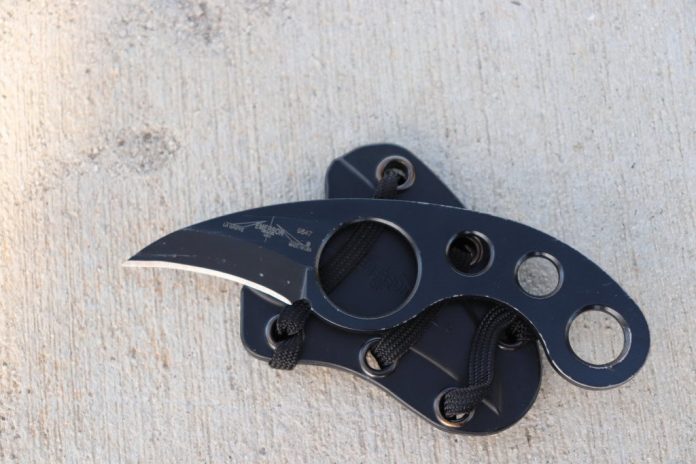 Tailoring your EDC (everyday carry) for each situation doesn’t have to be complicated. It also doesn’t have to be overboard. The truth is, that what you carry to work probably isn’t practical to carry while at school, to the gym, and definitely not while running. To touch on the latter, running, I don’t claim to be an aficionado, however, it is an activity that I’ve come to enjoy. It’s also a workout that requires you to have freedom of movement while doing it. As a firefighter and lover of all things gear related, I previously found it a bit difficult to decide what exactly I needed to carry while on the move. Here in Florida, I usually throw on a pair of gym shorts, a tee, my favorite sneakers, and to finish it off I carry a small blade and a single cell flashlight. My choice of blade carry has become the Emerson La Griffe, and the light is a Fenix E15 or Surefire Sidekick.

I own many knives, including fixed blades and folders, but I chose the Emerson La Griffe for the fact that it has no moving parts. It is lightweight, but not so light that I can’t easily locate it in my pocket, grab it, and deploy it if needed. It has just enough weight that it sits in the pocket securely without falling out, but also not so heavy that it “bangs” against my leg while running. That is probably one of the most important details… if it is annoying to carry, you will quickly ditch it and leave it on the dresser along with the other gadgets. The La Griffe is small in size, but the design is quite usable for a multitude of tasks, including self-defense if needed. It sits in the hand snugly and is secured during use by a finger hole that “locks” it into your grip, keeping you from losing it while “working”.

When it comes to running, I do it when I can. I’ve got a crazy schedule, and that often means running at night. While this may not be the safest idea to some, it is something that I enjoy, and as mentioned I live in Florida, so the sun can be pretty brutal. As with the knife, my choice of torch has the same qualities. When running with my dog, “Six”, the Fenix E15 goes with me. I keep it attached to the leash on two key rings.

That gives it flexibility so to speak and makes it so that I can grasp and hold onto it while moving. The E15 has four levels of output, with the highest being 450 lumens. Settings are easily controlled by a turn of the bezel, and one-handed operation is no difficult task. The Fenix came with a rcr123a (rechargeable cr123a) battery, giving it a long life, with lots of potential use. There’s no denying that this light can be blinding, which is an obvious reason for carrying in a situation like this.

Last, but not least, the Surefire Sidekick. This light is a staple to my EDC. It lives on my keychain, but thanks to the clip, is easily removable and can be carried in the pocket without a second thought that it’s there. It is made of, for lack of a better term, high-quality plastic or polycarbonate. This light is also rechargeable via mini-USB. It has a low, medium, and high setting, with the latter being 300 lumens. This light, while having the ability to be somewhat blinding, is more for illuminating the scene around you. The Sidekick is perfect for walking or in my case, running at night, and makes it a breeze with the push-button for operation.