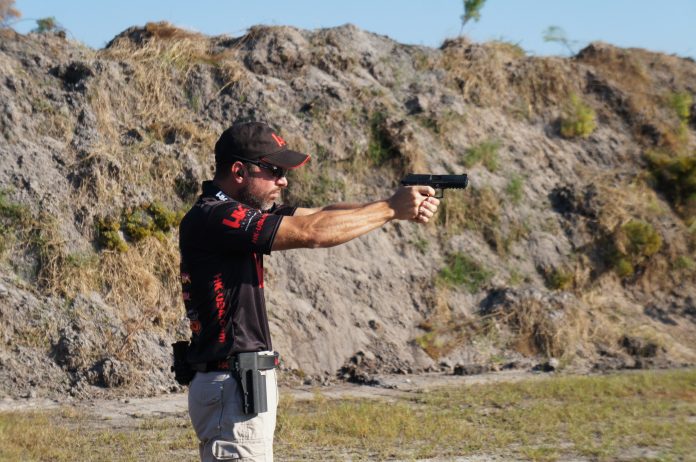 In the age of sub-second draws from Instagram superheroes, patch and coin challenges that require blazing fast draws, and unscrupulous “celebrity trainers” with access to video editors; every few months the question of whether or not you need a “fast” draw or a draw under 1 second really matters. Today we’re going to answer the question: does a fast draw matter?

If you’ve been reading my posts here at GAT Daily for a while now, you’ve probably discovered that I’m a big fan of nuance, and that’s no different today. Because the answer to the question of “does a fast draw matter” is yes, but also no, and also kind of maybe. To explain, we’ll look at the 2019 West Freeway Church of Christ shooting, which we’re all familiar with. In this video CCW permit holder Jack Wilson stops an active shooter with a single well placed shot. Make no mistake, Mr Wilson is a straight up hero and also has ice water in his veins. He also has a 3+ second draw. In the video, you can see he initiates his draw before the shooter fires his first round, and while the results of Mr Wilson’s single shot are effective, if he’d been able to get his gun into play quicker, the outcome might have resulted in no loss of innocent life. Again, nothing I’m saying here is intended to take anything away from Jack Wilson’s courage and marksmanship skills, but rather to provide an example of why being able to get the gun out of the holster and into play quickly might actually be important.

To put it another way: “speed is a tactic.” To elaborate from an entirely hypothetical scenario that definitely didn’t happen: let’s say you’re walking your dog and a local un-housed urban forager declares that he is going to “cut your throat and murder your dog” and then begins advancing towards you with his hands concealed. Suddenly, like you’ve dry fired a thousand times, you produce a small revolver from under your t-shirt and order the urban forager to “get the fuck back.” The sudden appearance of the gun causes him to rapidly recalculate your status as a victim and he departs the scene. In this entirely hypothetical scenario that definitely didn’t happen, the presence of a rapidly produced gun allows you to interrupt the bad guy’s decision making process and force his brain to re-think its plan. Does this work 100% of the time? No, but again, if you’re in a situation where a fast draw is important, it’s probably very important.

So, speed can be important to self defense, and having a “fast” draw can also be important. But here’s where we get into an interesting conversation, because we need to understand what exactly we mean when we say “fast.” The common definition of a fast draw on Instagram is anything under a second, right? But hold on, because I hate to say this, but a lot of people on instagram are full of shit. They’ll post the video of their one best run where they hooked everything up, but not of the 23 other tries where they couldn’t hit shit going that fast. If you can draw and hit an A-zone under a second only 1 time out of 10, you don’t have a sub-second draw. But here’s an interesting point: how much work do you need to put in to have a reliable draw that’s under 1 second? Well it’s actually pretty significant. I do have a consistent sub-second draw from AIWB, and I have spent a lot of time and effort in dry fire to get it there. This is where we get into the area of diminishing returns. How fast does your draw need to be?

If you are a self-defense focused shooter, and you’re so dedicated to getting your draw under 1 second that you’re neglecting other skills, I would offer the thought you might be focused on the wrong areas. If your draw is consistently around 1.5 or 1.75, you could be devoting that practice time to empty hand skills, pepper spray, or threat detection and avoidance. All of those things, especially threat detection and avoidance, will be more useful than a fast draw in the long run, and you’ll have far more opportunities to use them in your daily life. Which brings us to the time where a fast draw won’t matter: if you live a life where you never need your gun, which will likely be 99% of the people reading this post.

Nothing in here is meant to discourage you from trying to get a draw under one second. It’s an awesome training goal, and the people who can do it reliably and on command have a potentially valuable skill in their self-defense arsenal. But is it so important that you should focus on it at the expense of other more useful self-defense skills? No, it probably isn’t. Ultimately, the decision on how you spend your training time is up to you. Choose wisely.