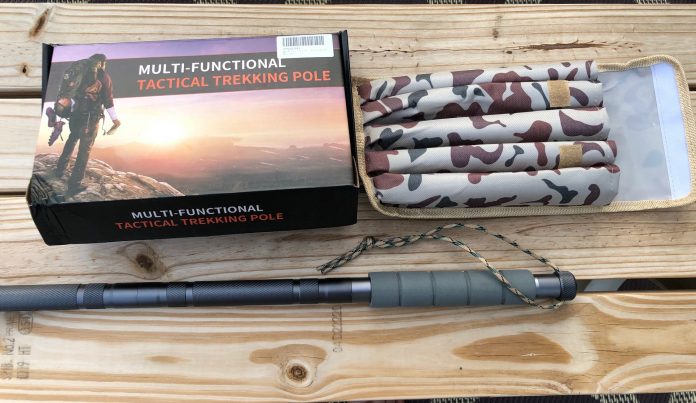 On one of my woods walks with my daughter this past month I realized that the way my knees are acting, maybe I should get a walking stick for stability. Not for standard strolls mind you, but for when going off-trail – navigating slopey stream banks, rocks, fallen logs, etc. I tore an ACL back in med school and never got it fixed. It’s been good for 20 years, but…

I didn’t want a heavy hickory quarter staff and I didn’t want to spend the coin on anything of wizard make. I just wanted a third point of contact on tricky terrain. When I did an Amazon search, I found this “Tactical Trekking Pole”.

Not only is this walking staff/trekking pole aluminum alloy and thus not heavy to tote around, it also unscrews into pieces for storage in its own case in my pack. The bonus is that it contains several “survival tools” inside the hollow pole sections. It’s not a Red Ryder but it does have a compass in the stock.

The tools included were: a knife/saw/bottle opener, a whistle, a double-ended screwdriver, another bottle opener, another saw (or is it a fish scaler?), and an edged tool other than the knife. The included insert had slightly different tools pictured than this model. I’m not sure why. I noted that the tools are anchored with plastic not metal, so they may not stand up to heavy or repeated use, but we shall see. Also included were two different tips and a snow/mud break.

A couple of the pole sections are empty – leading me to plan for what else I could stash in there – maybe some matches, maybe a few band-aids, some fishing line or duct tape – the possibilities are tantalizing.

The length of the pole as it arrived was a little short for me. This was a surprise, as I’m only 5’ 4” on a tall day. But I ordered an extension section which is about seven inches long, and that took care of it. Just be aware of that fact if you are a big guy and want one of these – you may want to order some extensions. Of course if you are THAT big a guy maybe the hickory staff is more your speed anyway.

Defense-wise, being aluminum, the pole is not much of a defensive weapon as is. It’s not a quarterstaff and I am not a Druid. But being lightweight does make it useful not only as a walking stick, but also as an anti-spider stick. This time of year when webs frequently cross narrow trails, having a lightweight tool to ward off the sticky traps can be inordinately handy. Last year I remember waving a branch around in front of me like a crazed orchestra conductor to fend off errant webs. No, this stick wouldn’t help me fight off Shelob, but I suppose you could put the knife tool on the end and use it as a spear in a pinch.

Apparently if you live in “other” countries though, instead of a knife attachment you get … a spork. On one hand a spork might be useful if I could figure out a way to jam a dehydrated meal down inside the pole, but from a weapons and survival perspective, I’d rather have the knife, thanks. I don’t think Shelob would be impressed by being threatened with a spork.

Granted, the knife isn’t the highest quality, but it did cut up an apple for me just fine. I usually carry a Buck folder in my pocket anyway, so the knife in the pole just makes number two for the whole “one is none” crowd.

I couldn’t find where this was manufactured on Amazon when I ordered it, but in microscopic print on the box it says “Made in China”. *Sigh*. I’m trying harder to not buy stuff from Communist China these days, but sometimes it’s hard to tell until it arrives.

Nonetheless, after a couple test hikes and some tool trying, I’m pretty pleased overall with this purchase. It’s not the highest quality in the world, and yes, it’s gimmicky/cheesy, but if you only need to use the tools once and it gets you out of trouble – then it’s invaluable. For my purposes and the price, I am quite satisfied.

But remember – It’s a “Tactical Trekking Pole”, NOT an old lady cane, mkay? Just so we have that straight.

*Limps away with her beer, muttering about kids these days*