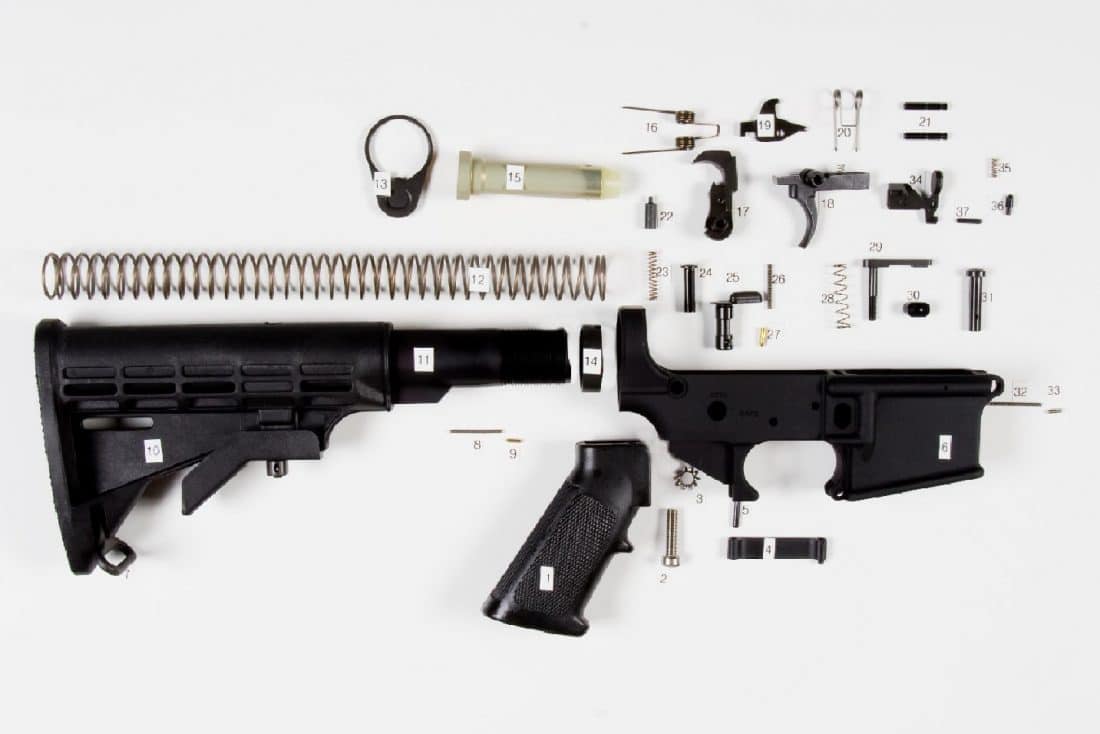 My choices were all based on personal preference and price.  Where I could get a good deal from various online or local retailers, I jumped at it.  Cost savings was important to me; I’m on a budget, but I also wanted quality gear.

There are many great companies putting quality tactical gear on the market and there are a few putting poor quality gear out there too.  Of course, I steered away from parts that didn’t meet anybody’s expectations.

In hindsight, I wish I were given a bunch of free stuff to review, but that didn’t happen.  Oh well.  Maybe in the future, eh?

I needed and required M4 feedramps as opposed to AR rifle style feedramps.  I have seen far too many jams and malfunctions from guns without them or ARs assembled in bulk by so-so or less than satisfactory firearms companies.

When it comes to gunfighting, I want to be able to have a short enough barrel to be operational inside a building.  I don’t believe in zombies, but urban warfare is more likely in my line of work as a police officer in a big city.  In short, when I built my AR, I wanted a carbine—either 16-inch or 14.5-inch barrel, with a staked compensator to equal 16-inches to avoid lame NFA requirements.

I chose a Daniel Defense pencil style barrel. I wanted to keep it light weight.  Plus, I figured I wouldn’t be blasting rounds fast enough or often enough to heat the barrel and damage it, so I went lightweight.  I opted to add my own flip up front sight later on, so I got a low profile gas block.

Like I said, I wanted this gun to be light in weight.  I looked at all kinds of great options, but, frankly, I couldn’t see myself purchasing a carbon fiber Lancer front end even though that would have been way cool.  I wanted a free floating handguard that was high quality.

Since I wanted to stay light, I avoided full quad picatinny rails.  I did chose a full p-rail along the top.  I haven’t swallowed the key mod thing yet either, but I might in the future and this gun may be a testament.

While I saw a lot of nice free floating forends, I ended up going with a Gen 2 SS from Midwest Industries.  I avoided the plastic p-rail add-ons.  In my estimate, they’re junk.  After I tightened the screws, they broke.  I opted to buy the metal ones.  Overall, I like it so far.

Once again—since I wanted to stay light weight—I went with the LaRue handstop.  I didn’t want a full broomstick handle.  And I didn’t need to order one either.  LaRue sent me a couple a while back and also a couple of copies of the pocket sized US Constitution. Gotta love that!

For my tac light, I wanted something small and light.  I wasn’t too concerned about having super high lumens for bright output since inside a building, where I envisioned the most likely encounter for urban tactics to be, the light would reflect off the walls.  I went through my tactical gear boxes and found a small Insight Technologies X2 subcompact tac light.  The X2 is supposed to go on smaller guns, like a XDS, but it works here too.

If I had some extra dough or a literal tree that produced money, I would have purchased an Inforce Weapon Mounted Light, instead of something I had at hand.

Tactically speaking, I believe a good compensator is well worth the purchase.  Forget the A2 Bird cage.  So, I purchased a Battle Comp compensator to reduce my muzzle jump and minimize my flash signature, something not all compensators do.  Plus, I already bought one for my other AR and loved it.

Battle Comp is built with cops and tactics in mind.  I’d like to say I got it for free, but nope.

I went with a standard, tactical upper and lower receiver from JP Rifles.  Wow—they are top notch.  With a handful of hard and fast requirements for my tactical AR, I had to make sure I stayed on the low-end price wise and retain things like a forward assist.  I didn’t get so fancy that it took away from being tactically operational and what I’ve been used to for many years.

I went with a flattop rail system for easily mounting optics to my weapon.  While I think having a powered scope or optic would be cool for competition shooting or rural settings, I operate mostly in an urban environment.  I did use my Aimpoint mini on a flattop rail, and I made sure I had backup sights available.

I really like the design, operation and function of the BCM Gunfighter charging handle from Bravo Company USA.  I didn’t need the ambidextrous one.

I opted for the medium size charging handle because as a right handed shooter, when I let the gun hang on my SOB B-sling, I don’t like it to get knocked loose. The medium length handle comes out far enough that I can grab it easily, but it doesn’t stick out so much that it annoys me.