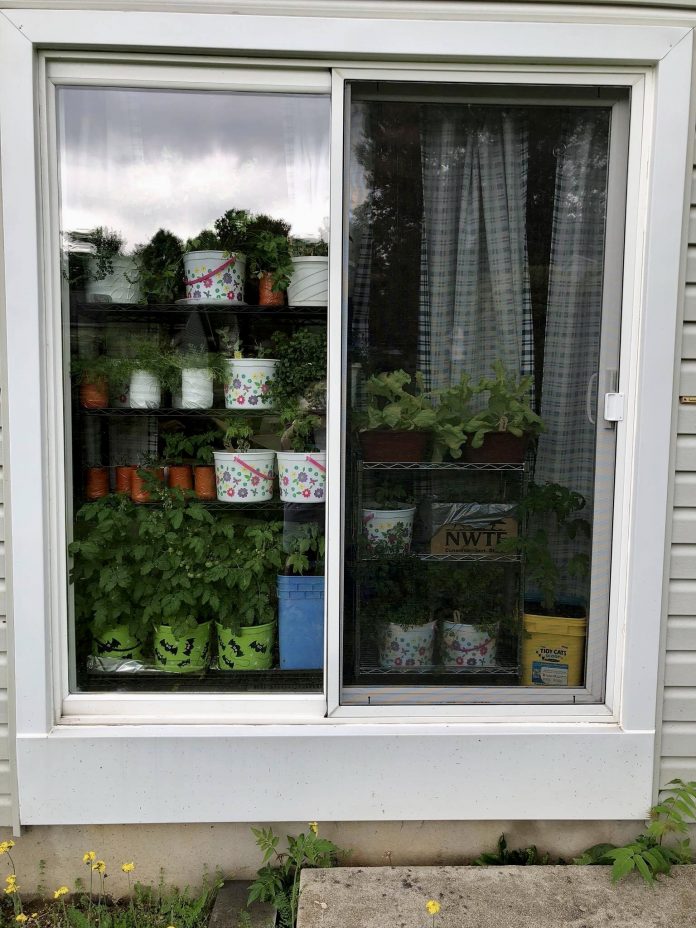 Lots of people keep a collection of seeds in their Doomsday/SHTF supplies – just in case they need to create a survival garden. But what about the people who don’t have much (if any) yard space? Did you know that you can grow many kinds of fresh vegetables indoors?

The big requirement for a window garden is a bright south-facing window – or three. Obviously in a collapse situation like the next Great Depression, you may not have electricity to run “grow lights”. But you don’t need them if the orientation of your home is right. I am lucky to have a large south-facing patio slider. Since I don’t use the slider much to go in and out, I’ve got most of two large ceiling-to-floor windows to work with.

An indoor window garden won’t produce in the abundance of an outdoor garden, but your “crop” is protected from the ravages of insects and wildlife (or scavenging humans), and the growing season is longer due to the more steady indoor temperatures.

Your window garden likewise won’t produce enough to support a family of five, but it will give you some fresh greens to supplement and brighten up a stored food supply, and will also help stave off nutritional deficiencies that come with a limited diet.

A window garden doesn’t require a big financial investment, and there is no backbreaking labor involved. Seeds can be saved or are relatively cheap, as is indoor potting soil (especially if purchased end-of-season). Dwarf and container varieties of many vegetables do exist if you search for them. The containers can be “free” if you use repurposed plastic containers or cardboard boxes as I have. Additionally, I have used toilet paper rolls and takeout containers with clear lids as seed starters for zero additional expense.

My biggest financial outlay was for a set of wire shelving once my collection of plants got too large. I even repurposed a large orange juice jug into a watering can. It got to be a personal challenge for me to see how little I could spend, and for awhile I was calling myself “The CheapAss Gardener”.

Here is a short run-down of what I’ve had success with indoors over the past couple years.

I have had great success with the heirloom variety “Tiny Tim”. The first consideration is that since it’s an heirloom, the seeds will breed true. The plants are relatively compact and will bear several times, especially if you cut them back and fertilize when they start getting ugly and leggy. I have a Tiny Tim growing in an old Halloween bucket that has remained alive in my window over the last winter and is continuing to bear even into the end of its second season. The plant is now about 20 months old and still going. I never knew that was even possible.

Believe it or not, I have been able to grow small heads of cabbage in a cardboard box in my window. Cabbage is another vegetable that can be eaten fresh, but also dehydrated for storage. I used seeds of any old “garden variety” (pun intended) for my experiment and it was fine, but dwarf varieties do exist, and I’m going to look into those further.

I originally bought two pre-started plants of Sugar Ann Snap peas on a whim at the garden center. They worked well indoors because the vines are short and bushy and don’t go all over the place. They were such a success that I bought seeds for the following year. These little pea vines happily climbed up a wire grid that I clipped to the shelving rack I was using. They bore cute little tender pods that I added to my salads and stir fry. Snap peas can also be dehydrated if your plants are producing too much for you to eat at once.

I tried several varieties of Lettuce, including: Black Seeded Simpson, Butter crunch, Romaine, and Salad Bowl. Nothing formed actual heads, but the tender leaves are tasty as is, and I enjoyed many fresh-as-you-can-get salads last season.

Spinach is another leafy-type vegetable that I had modest success with in the window. I didn’t get a huge yield, but I got enough tender leaves to add to soups and a few salads, and some to freeze in ice cube trays for later use.

Many fresh herbs are quite happy in a bright window too. Although you can’t make a meal of them alone, they can provide trace nutrients and give some flavor variety to the “same-old same-old” grains, dried beans, etc. that are in your stored supply.  Plus you can make hot tea out of them! Herbs that have done well in my window include: Thyme (regular and lemon), Oregano, Basil, Mint, and Rosemary.

I tried a few veggies that didn’t go well, too. Green onions just were not enthusiastic for me, and despite three tries I couldn’t get carrots to give me more than a handful of two-inch orange dwarfs.

Still, if we are talking about an economic collapse and survival food, then a handful of fresh but stunted beta-carotene is better than none at all. And so are a few green onion tops even if they don’t bulb out. Toss it all in the soup pot with a few other “failures” and everybody still gets some nutrients. I also hear (but have not tried myself) that you can make pesto with the “waste” green carrot tops. Waste not Want not. Fresh greens when you’ve been eating out of cans? Why not?

Next year I’m looking at trying a dwarf broccoli and maybe some peppers just to see how it goes. I’ve also read that you can grow potatoes in a large pot or garbage bag indoors. That sounds like a new experiment waiting to happen at my house.

Even in good economic times a window garden is a fun and colorful way to expand your fresh food diet. It is very satisfying to be able to pick your dinner salad right out of the window. Even if you don’t have a yard, utilizing a bright window to grow vegetables can not only make you feel like a real gardener, it can shore up your nutritional intake during hard times.