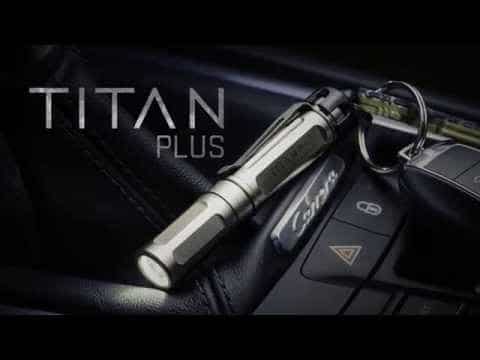 SureFire is now prepping two highly-anticipated accessories for sale, the new WarComp flash suppressor and Titan Plus tactical flashlight. The WarComp is the newest addition to the SOCOM series of muzzle devices and the Titan Plus is a micro flashlight for your pocket or keychain.The WarComp is a flash hider that doubles as a quick-detach mount for SOCOM suppressors. What makes the WarComp stand out is its ability to provide muzzle control in addition to flash control. As a general rule, muzzle devices can suppress flash or control the muzzle, but few do both well.

SureFire maintains that the WarComp removes 99 percent of the muzzle flash compared to no device at all. The device holds the barrel in place with 18 small ports at the base of the flash hider on the top and sides but not the bottom of the unit. This prevents side-to-side movement of the barrel with some downforce to combat muzzle rise.

Developed to allow soldiers to shoot unsuppressed without giving away their positions, these features can be a benefit to all shooters everywhere. The WarComp is machined from stainless steel bar stock and has a deep black Ionbond finish and is offered for 5.56 NATO/.223 Remington and 7.62 NATO/.308 Winchester guns with standard AR thread patterns.

The WarComp is now shipping to dealers with availability expected by this September. The MSRP for both models is $149, so not inexpensive but not crazy, either. Some retailers have already listed their launch prices at around $130.

The Titan Plus has a much broader, everyday appeal. This tiny rechargeable flashlight was made in the spirit of SureFire’s wide range of lights for military, law enforcement, first responders and of course, anyone else looking for a hard-as-nails light, but in miniature.

The Titan Plus is so small and light it comes with a clip-on keychain adapter so that you never leave home without it. At a little over 3 inches long and under 2 ounces including the battery, there’s no excuses not to take it with you, no matter what you’re wearing or where you’re going.

It has three brightness settings. It defaults to low brightness with a 15 lumen output. That low enough to read by and use without trampling your vision. On medium the flashlight’s beam is a surprising 125 lumens, and on high an unprecedented 300 lumens, enough to light up the night.

Battery life is pretty good, with 8.5 hours’ runtime on a full charge on low, 2 hours on medium and 1 hour of high. The flashlight is powered by a rechargeable AAA NiMH cell and can be powered by any standard AAA battery. With a non-rechargeable lithium AAA the battery life is even more impressive, as much as 17 hours on low. It ships with one rechargeable battery, a keychain clip and a pocket clip.

SureFire makes brighter lights, and lights that get better battery life, but none have the kind of versatility that the new Titan Plus has. This little guy is sure to wind up in everyday carry kits all over. SureFire is currently taking orders for the Titan Plus on their website for $59, which again, isn’t cheap, but it’s not flat-out expensive, especially for something that will see a lot of use.