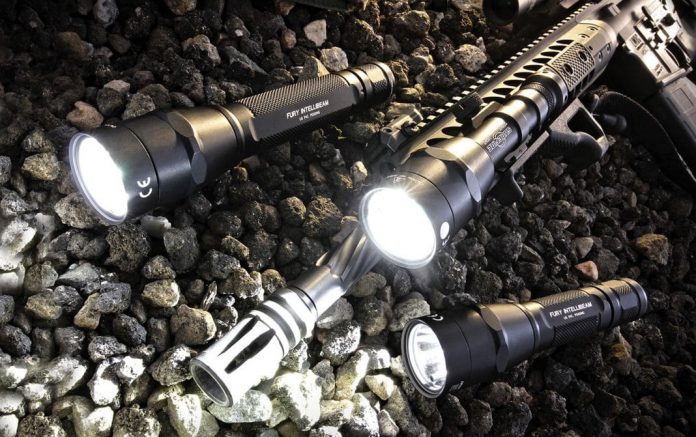 Not too little, not too much . . . always the right amount of light

When I was young(er), a tactical flashlight was any flashlight you had on duty. These tended to be rather weighty affairs, with multiple D-cell batteries housed in a cheap plastic or aluminum tube, and activated via a side-mounted switch. They generally put out about 10 lumens of rather diffuse illumination, with a corona that looked as if it may have been given off by a Christmas tree light. Then we upgraded, so to speak, to Maglights. These were quite stout, some were smaller, and all gave off more light than their predecessors. You could even adjust the beam via a rotating bezel. Sometimes we would try, with limited success, to attach these to our rifles with hose clamps in creative attempts to have a functional weapon light.

Finally, in the late 20th Century a company called SureFire (formerly Laser Products) came out with a reasonably sized, highly robust, truly tactical light that put out a “blinding” 60 lumens of light via a quality beam, using a tail mounted button that was appropriate for the task. Since that happy day, SureFire lights have only gotten more robust, more powerful, and more versatile. Now, they can add another superlative: more intelligent. This is because the SureFire P2X Fury with IntelliBeam (IB) technology does what no other flashlight can do: sense how much light you need and automatically make the appropriate adjustment. For those of us who have only known “dumb” lights, typically with only one to three settings to choose from, this sounds either too complicated or too good to be true. Fortunately, its not on either count.

The P2X Fury IntelliBeam is part of SureFire’s new generation of tactical lights. Its bigger brother, the 3PX Fury Intellibeam, is 7.2 inches long and weighs 7.8 ounces. The P2X Fury IB is 1.4 inches shorter (5.8 inches) and over an ounce lighter. Each look and feel like most other hand-held SureFire flashlights, the main difference being they are a bit heavier than their less intelligent cousins. Both models have 1.37 inch bezels and are housed in 1-inch diameter aerospace-grade aluminum tubes that are built to take a beating, being impact and weather resistant. If you need to identify targets over a football field away or rent yourself out as a lighthouse, the P3X Fury IB will send out from 15 to a truly blinding 1,000 lumens. The P2X Fury IB puts out a more modest but very capable 15 to 600 lumens. A powerful, even corona occurs through a combination of super bright LED and parabolic mirrors, powered by common 123A lithium batteries. Runtime on full power is 2.5 and 1.5 hours respectively, while at low power they will stay on for two days or better at 53 and 46 hours Respectively. The tail cap can lock on or off, and the tail switch can be used for momentary or constant on. Neither the P2X or P3X come with a lanyard, combat bezel or belt clip, though combat bezels are available as add-ons. For those needing a dedicated weapon light, the M600 IB Scout Light offers capabilities similar to the P2X Fury IB in a slightly thinner package, with output from 100 to 500 lumens for up to five hours. The M600 Scout IB comes affixed to a thumbscrew mount that will fit on any Mil Spec 1913 Picatinny rail, and a protected area around the tail mounted activation switch. Remote switches are also available optionally. The only outward sign SureFire Intellibeam flashlights are different is a small black rod visible in the bezel, which houses the sensor. The sensor automatically samples the surrounding environment before the light is turned on, then delivers the proper amount of light. Upon receiving my sample P2X Fury IB, this turned out to be true. As I moved the light, it adjusted the beam just right. It was kind of a weird sensation, like it was reading my mind. Still, being a natural skeptic of most things technological, I was concerned with getting 600 lums of initial reflective back blast every time I used it in an enclosed space or up close. Nope. Upon testing in my closet, and using the P2X Fury to read a paper in various light conditions, I was not blasted and I couldn’t fool it. But, what if you are outdoors and want full power all the time? Simply click off and on within one second of activation, and all 600 lums are there. Not having a M600 IB Scout Light handy, the I wanted to know if I could use the P2X Fury IB as a weapon light? I often prefer to mount handheld SureFires at the 11 o’clock position via various methods on my evil black rifles. If sometimes a tad heavy, handheld SureFires always work, and they are usually much cheaper than a purpose-built weapon light. I was able to mount my P2X in a Larue LT606 QD mount on the forend of my 16-inch BCM AR, and let fly with about 50 rounds of 5.56. While obviously not producing the recoil of a 7.62 or bigger round, the P2X Fury IB worked with no problems. Other than its tendency to get a bit warm when on for a while, there is nothing not to like about the P2X Fury IB or its kin. It’s now my favorite tactical light. List price is $229, or about $70 more than the dumb version. The P3X Fury IB will set you back $279, and the M600 Scout IB goes for $299. Check out the IntelliBeam family at your outdoor retailer, or contact SureFire, LLC, Dept. OT; Tel.: (800) 828-8809; Web: www.surefire.com