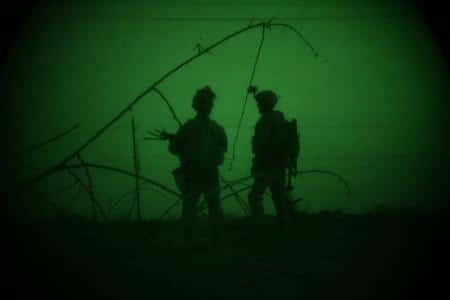 With NODS of all types coming down in price as technology improves, there are a lot of LE and responsible armed citizens now employing night vision for their own applications. Until recently there has been a huge void in the market when it comes to IR tactical lights as a whole, particularly with regard to pistol mounted lights. Adding to this frustration is a dearth of quality IR laser aiming devices. SureFire has just announced two new weapon lights to complement their recent release of the reduced profile IR scout lights (which we covered here).

Joining the IR capable lineup are the new X-Series family of WeaponLights. These WMLs are designed for handguns but can also be mounted to Pic rail equipped long guns. The 12 o’clock mounting position on carbines has become quite poplar the last few years, to the extent that many companies are making special accessories to accommodate the configuration. (Check out the Unity Tactical EXO for SureFires.)

The new, highly versatile X300®V and X400®V IRc lights feature SureFire’s ingenious V-Series head, a sealed, selectable head that contains both a white-light and infrared LED inside, to accommodate missions requiring visible and virtually non-visible IR (to the naked eye) illumination. By simply pushing and rotating a self-locking selector switch on the head, a user can switch from white-light to IR illumination (for use with night vision devices) on the fly, with no infrared filter required. The X400 model even boasts an infrared laser.

This is exactly the kind of setup you need if running night vision and a firearm, regardless of what your mission requirements are. Low light home defense to hog hunting to prowling sorority row to serving a high risk warrants – there are plenty of uses!

The X300V generates 150 lumens of light on its white-light setting and 120 mW of infrared illumination when set to IR mode. Light output from either mode is shaped by a proprietary optic—a Total Internal Reflection (TIR) lens—into a high-intensity beam with significant reach and sufficient peripheral illumination for maintaining situational awareness (which is obviously crucial in military, law enforcement, and home-defense applications).

You can read this as “Light reflects off walls, so you can see everything in the room.” However you can also read it as “Is that dude holding a gun 100yds away?”

The highly anticipated X400V IRc generates the same high-intensity beam at identical outputs in white light and infrared as the X300V, but it also features a commercially available <0.7 mW infrared laser sight, (viewable for several hundred yards, and eye-safe) suitable for force-on-force training and ideal for stealth operations using night vision devices. As with all laser-equipped SureFire X400® WeaponLights, the X400V IRc’s laser-adjustment mechanism uses Nylok® screws that won’t back out from the effects of recoil. Because the IR laser is not visible to the naked eye, an amber-colored LED indicator illuminates whenever the laser is on, to help prevent unintended activation. This feature is important for anyone who has accidentally activated their IR laser or light without NODS on, only to discover their batteries are dead when going to use it – that really sucks if you’re on a potential 2-way range.

Like all X-Series WeaponLights, these new models are constructed of lightweight aerospace aluminum that’s hard anodized with a Mil-Spec finish and are O-ring and gasket sealed for added durability and weather resistance. The X300V weighs in at less than four ounces—including the weight of the two 123A lithium batteries that power it—while the X400V model is just under five ounces fully loaded, so neither model weighs down a weapon. One-finger activation is achieved via a push/toggle switch located on the rear of both lights; optional DG pistol grip and long-gun remote tape switching is also available. Both models attach quickly and securely to both Universal and MIL-STD-1913 (Picatinny) rails, and optional SureFire adapter mounts are available for several popular rail-less handgun makes and models.

The X300V has an MSRP of $389, while the X400V IRc retails for $875. But you always get what you pay for, and with Surefire that’s damn near infallible combat grade quality.  We are excited to see these lights coming out, as they will certainly provide a new suite of reliable low light solutions to those who use NODS on the regular. They are currently available for purchase through authorized SureFire dealers and will soon be available direct from SureFire by calling 800-828-8809 or by visiting www.surefire.com online.