Finding a good light for your shotgun is a real pain, especially if it’s a pump gun. It’s a tricky proposition to combine a light with a manually operated firearm whose whole forend moves. Well, Surefire figured out the solution to that problem long ago. The latest incarnation of their pump integrated light is the Surefire DSF series of weapon lights. I got my hands on a Surefire DSF 870 light and tossed it on my beat-up old 870. Does it live up to Surefire’s reputation for outstanding weapon lights?

I guess we’ll find out.

Breaking Down the Surefire DSF 870 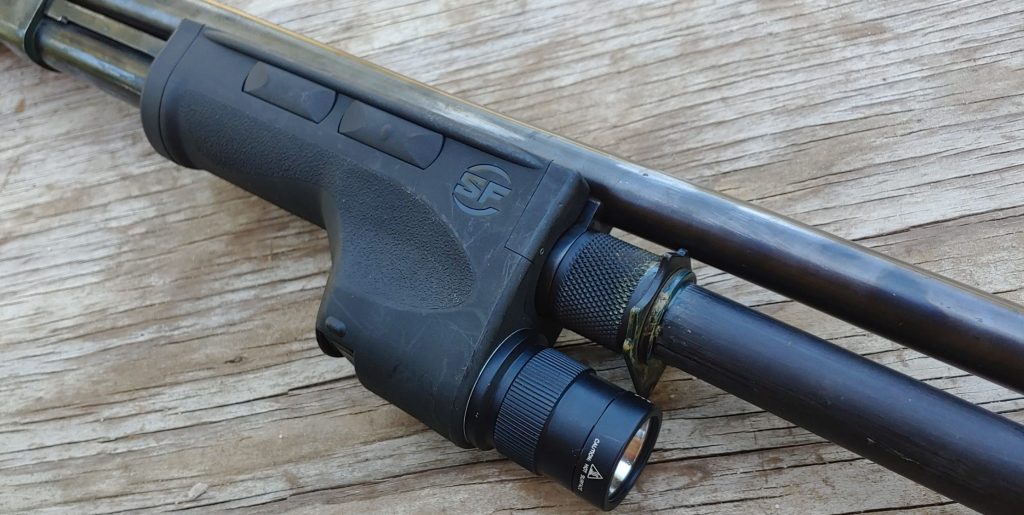 The Surefire DSF packs both a high and low mode for a variable 600 or 200-lumen count. These lumens are backed by 13,000 candela and thrown by the Surefire Parabolic reflector. The light will last 1.5 hours on high mode and 3 hours on low. The mix of modes delivers a light that can be used for various situations that can also help you save some battery life.

When you integrate a light into a forend, you have to deal with some extra weight. That extra weight adds up to 17.8 ounces. It’s powered by two 123A lithium batteries. As you’d imagine, the Surefire DSF is made to last.

It can be fully submerged in water up to a meter with its IPX7 waterproof rating. The pump is made from high-impact polymer, but the light itself uses a mil-spec hard-anodized aluminum body. It can take a beating and is made to take an ass-kicking.

The Surefire DSF comes with a total of six controls. Four matter for tactical use, and two are more for admin purposes. The four main buttons serve two functions, but you get four buttons because you have ambidextrous controls. On each side, you have two massive buttons. Big enough to easily use with shooting gloves. The forward button utilizes the momentary mode, and the large rear button activates the constant mode. Should you choose to, you can reverse what the buttons do and put the momentary rearward and constant forward.

On the left side of the Surefire DSF is a very small button that changes the output from high to low and vice versa. The light provides a programmable source of light that memorizes your last setting and activates the momentary or constant mode based on that setting. It’s rather handy and allows the user to set the mode before the fecal matter hits the fan.

On the bottom, you have a universal kill switch. This switch allows you to shut off the light and disable the buttons. This is for storage and transport purposes and prevents NDs with the light, which can drain the battery.

The Surefire DSF 870’s beam casts a wide, peripheral vision filling beam. Surefire calls it the Ref beam. It’s the Goldilocks of beams and casts light both forward and to the sides. This beam design is perfect for a shotgun.

Shotguns are long guns, but they are designed for relatively short ranges. They rule at CQB, and in CQB, you want good peripheral vision, but you also want a beam that reaches out far enough to be useful on a long gun. The Ref beam grants you a good compromise, and it’s well suited for a fighting shotgun.

The Surefire DSF casts a beam far enough to make it easy to identify and engage threats at 75 yards. Inside of 100 yards, you can see your target, but it might be tough to tell if they are armed or to make out the finer details of the target. At 50 yards, you’re gonna blind the poor guy and before he gets a dose of buckshot. At home defense ranges, it’s certainly enough light to see your potential bad guy or potential disruptive cat.

It’s a good little light that does push a fair amount of power forward. It’s tough not to compare it to the modlite or Cloud Defensive options. You won’t get the same photonic barrier penetration, but you can overcome most common light sources inside of shotgun ranges. Streetlights, most handheld lights, and overhead lights will be defeated by the Surefire DSF.

The warm beam helps with photonic barriers and also makes it easier to see the colors and details of a target. In my experience, warm beams also seem to be brutal on the eyes of a potential attacker. More so than a cooler beam of comparable power.

The Surefire DSF grants you positive identify power with your favorite pump-action shotgun. The power of the light seems well balanced with its size and for its purpose on a short-range weapon. Beyond that, the extra heft helps you fight muzzle rise. It turns out a 17 ounces pump keeps your gun from bucking too much.

If you use a modern shotgun shooting style like push/pull, then the big hump of the light gives a great base to push. The downside is the slight bang you’re gonna get to your hand after you fire every shot. Well worth the extra control, in my opinion.

Overall, the Surefire DSF is a duty of home defense ready shotgun light that performs. Shotgun lights are ticky, but Surefire most certainly figured it out with the DSF series. Now, if only they’d make one for the Benelli M4 or Beretta 1301.