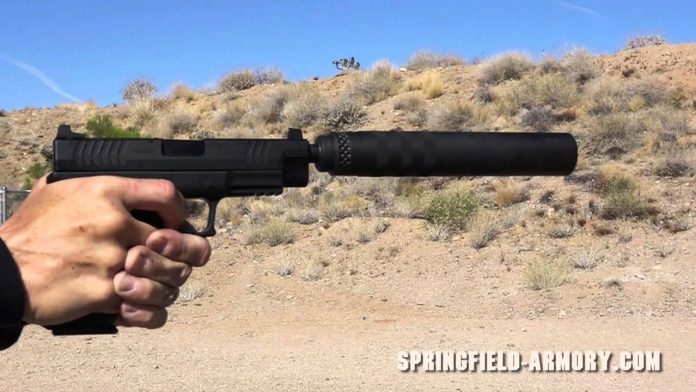 There are few items in the firearms world with as much mystique and wonder as the modern day suppressor. These handy devices have seen an astronomical increase in interest as people begin to discover all of the benefits of owning and using a suppressor on their firearms. The first step in this conversation about suppressors is to get a quick look at how these little gems work.

When we press the trigger the gun fires and a chain of events is set into motion. The fired round produces hot and pressurized gases that force the bullet down the barrel. Once they launch the round out of the barrel they escape into the open and in doing so experience a dramatic change in environment which causes the explosive sound we hear. Suppressors work by chambering and controlling those gases to more efficiently funnel them and cool them before they leave the gun.

The suppressor is composed of several parts depending on the brand and design, but essentially all share some common parts. The main body or expansion chamber is composed of a series of baffles that efficiently funnel, cool, and spread out the gasses to reduce their noise once they do reach the outside. The number and design of the baffles is often a trademarked item as each company looks to find the holy grail of silence. The end result of this gas pinball action is a quieter shot with reduced recoil.

Contrary to popular belief, suppressors do not completely eliminate the sound of a weapon being fired. Some do an exceptional job but they are in no way truly silencers. The funny thing about that is that the ATF in the NFA division actually list suppressors as “silencers.” Why they do so is not known to me, but my guess is that it was a term in common use when laws were written and it simply stuck. Suppressors are also commonly referred to as “cans” because of their design. The ultimate goal of a suppressor is to make the weapon “hearing safe.” This means the sound is controlled and diminished to the point that hearing protection is not required. In some guns this is easy and made easier by the use of subsonic ammunition. Others, however, will never reach that level, but the percussion of the shots are less spleen damaging.